Football: As Wildcats battle injuries, walk-ons and reserves step up 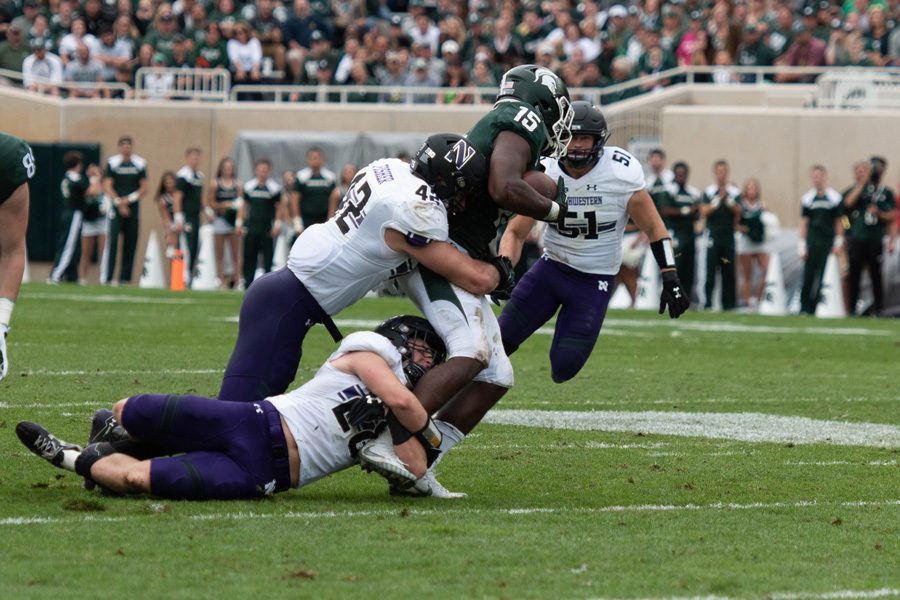 Before he was Northwestern’s starting strongside linebacker, Chris Bergin was a kid from Michigan who dreamed of playing Big Ten football. But his only scholarship offerings came from a smattering of MAC and Ivy League programs. So he came to Evanston as a walk-on, then took full advantage of his opportunity to play as soon as it arrived.

The sophomore is one of a group of Wildcat walk-ons and reserves who have become key contributors on all sides of the ball in recent weeks as NU (4-3, 4-1 Big Ten) battles injuries and inconsistency ahead of its most important stretch of the season.

Bergin saw his first real action this season when an injury forced senior Nate Hall to exit the Sept. 29 game against Michigan. The sophomore had eight tackles against the Wolverines and has totaled 26 tackles in the three games since.

“Coach Fitz always talks about next-man-up, and (Bergin)’s embodied that,” junior defensive end Joe Gaziano said. “He’s one of those players that had he not stepped up, we’d have a glaring hole in our defense.”

Senior running back Chad Hanaoka, who walked on after working with the program’s video team his freshman year, has played a bigger role in recent weeks amid the struggles of the Cats’ injury-depleted rushing offense.

Sophomore walk-on kicker Drew Luckenbaugh, filling in for the injured Charlie Kuhbander, earned headlines when his overtime field goal gave NU a win over Nebraska earlier this month. Junior walk-on defensive back Joe Bergin — Chris’s older brother — was named the team’s special teams player of the week after the win over the Scarlet Knights.

“We do a really good job preparing our ones and our twos exactly the same, and guys know that you prepare as if you’re going to play every snap,” the younger Bergin said. “That mentality and that mindset going into a game really prepares you to be ready at all moments.”

That “next-man-up” philosophy has extended beyond walk-ons this 2018 campaign.

After freshman cornerback Greg Newsome was injured against the Wolverines, junior Trae Williams returned to the fold and has been a bright spot in the NU secondary, with 10 tackles and a forced fumble in the win over the Cornhuskers.

The offensive line has had to dip into its reserves with players like redshirt freshman Sam Gerak and sophomore Nik Urban seeing some time on the field.

After NU snuck past the lowly Scarlet Knights to remain at the top of the Big Ten West last week, coach Pat Fitzgerald credited the young players for stepping up to bring back the win. The Cats might find themselves in a similar situation this Saturday: the injury report released Thursday afternoon revealed that veteran running backs John Moten and Solomon Vault are still questionable for the matchup against No. 20 Wisconsin (5-2, 3-1), possibly leaving NU with a young attack again.

“We responded with a bunch of pups,” Fitzgerald said after the Rutgers win. “We’re a very young football team growing up a little bit, and we’ve been through some battles here, and my hope is here (in) the last month and a half of the season, we’ll just continue to work to get better.”