Schapiro makes appearance at Game 1 of the World Series 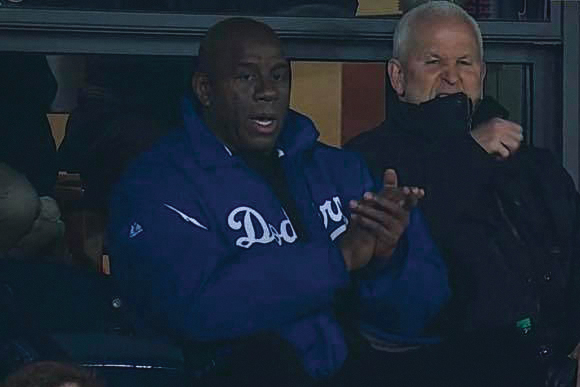 During the middle of the seventh inning of Game 1 of the 2018 World Series between the Los Angeles Dodgers and the Boston Red Sox on Tuesday, the Fox cameras cut to show Los Angeles Dodgers owner Magic Johnson watching the game from a Fenway Park box.

Northwestern students may have been drawn to the other person in the frame. Sitting to the left of the five-time NBA Champion was University President Morton Schapiro. A screenshot of the two quickly went semi-viral on Twitter and became fodder for the Northwestern meme page. Schapiro said he was a guest of Dodgers owner and chairman Mark Walter.

“I was attending the meeting of the AAU Presidents and Chancellors in D.C. when Mark Walter suggested I fly Tuesday afternoon to Boston instead of back to Chicago,” Schapiro said in an email to The Daily. “He didn’t have to ask me twice.”

Walter graduated from Northwestern’s Pritzker School of Law in 1985 after earning his undergraduate degree from Creighton University. Walter, who was named to the Northwestern Board of Trustees in 2014, has also donated over $40 million to the University and is the namesake — along with his wife, Northwestern graduate Kimbra (Weinberg ‘85) — of the new Walter Athletics Center.

Guggenheim Baseball Management bought the Dodgers in 2012 with Walter — who is the CEO of Guggenheim Partners — as the controlling owner.

Schapiro said the box had about a dozen people in it and he talked with Johnson — who won a national title at Michigan State — “quite a bit” about Northwestern and Big Ten basketball in addition to Johnson’s exploits in East Lansing.

For the game itself, Boston won 8-4 as Andrew Benintendi rocked four base hits and scored three runs for the American League champions. Both team’s southpaw aces — Clayton Kershaw and Chris Sale — had rocky outings and were relieved by the end of the fifth inning. The result was not what Schapiro had in mind.

“Even if I weren’t a Dodger fan as a result of my 11 years on the faculty at USC, when you sit with the owner, you cheer for the owner’s team!” Schapiro said.

Despite the loss, Schapiro predicts that the Dodgers will win the series in six games. Game 1 was Schapiro’s first ever World Series game, and he said he does not plan on attending any more this year.

When he was shown on the Fox broadcast, Schapiro was wearing a large black coat without, unusually, any sign of purple. However, he said he was wearing purple underneath his coat.

“I was wearing a purple sweater but I was freezing so (I) had my jacket buttoned up,” Schapiro said. “If I knew I was on TV, I would have made sure the purple was visible.”