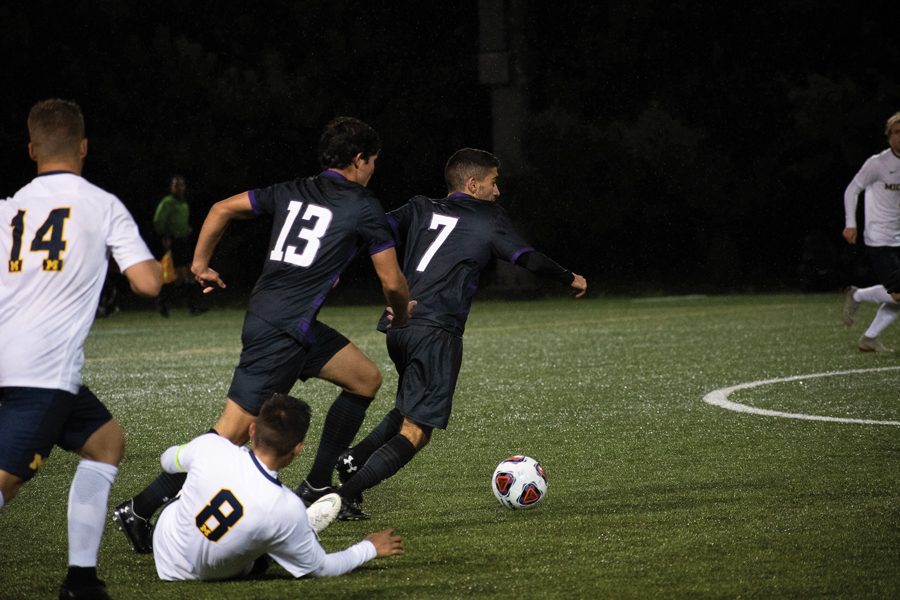 Bardia Kimiavi dribbles the ball. The freshman midfielder has played in all 16 games this season.

Northwestern has had seven opportunities to win a conference game this season.

Despite not being able to turn any of those games into victories, the Wildcats (4-7-5, 0-4-3 Big Ten) have one last chance to get their first of the regular season at Martin Stadium against Wisconsin on Wednesday.

In its previous seven matchups against conference opponents, NU has played to three 0-0 draws, including this past Friday against No. 13 Michigan State. But in those that weren’t ties, the Cats have been outscored 8-3.

Despite the lopsided scoring, coach Tim Lenahan has been impressed with the play of his sophomore goalie Miha Miskovic.

“To get a shutout, it’s fantastic,” Lenahan said on Friday. “It’s his first year really playing. Hopefully he continues to develop and we can turn some of these draws and one goal losses into wins.”

Miskovic has been one of the best goalies in the Big Ten this year, averaging 3.8 saves per game and 61 saves on the season, which both rank second in the conference.

NU will look to slow down the Badgers (7-5-2, 4-2-0), who are ranked third in the Big Ten standings. A win over the Cats would give Wisconsin a better chance of moving up to the second-ranked team heading into the Big Ten Tournament.

The Badgers have won five of their last seven games of the season, including four out of five against Big Ten opponents.

The Badgers two leading scorers, forwards Andrew Akindele and Noah Melick, both grew up in Illinois and the duo has combined to score 16 points on the season.

Like Wisconsin, the Cats have been relying on their freshman all season and all five of the first-year players saw action against the Spartans on Friday.

“Those experience of guys getting to play 18, 19, 20, 21 games this year, you can’t replicate that when the season starts next year,” Lenahan said. “Guys who have played well in some games really bodes well for the future.”

Of the Cats’ five freshman who have played this year, four have played in at least twelve games this season, with freshman forward Jose Del Valle missing time due to injuries.

As the season has gone on, however, the freshmen have found more opportunities to contribute to the team.

The Cats will need their freshman to step up, but also need key contributions from upperclassmen as well.

Seager — second on the team in points — scored NU’s lone goal against UIC, but prior to that, hadn’t netted one since Sept. 9 against UMKC.

Senior midfielder Camden Buescher is the Cats’ leading points scorer, but has not gotten a point since Sept. 14 against Maryland.

Despite the recent offensive struggles, Lenahan knows that his team will continue to grind out points no matter what their record looks like.

“It’s a part of our development,” Lenahan said. “It’s a funny record, with 4-7-5, but that’s nine results… the guys are working hard and fighting.”