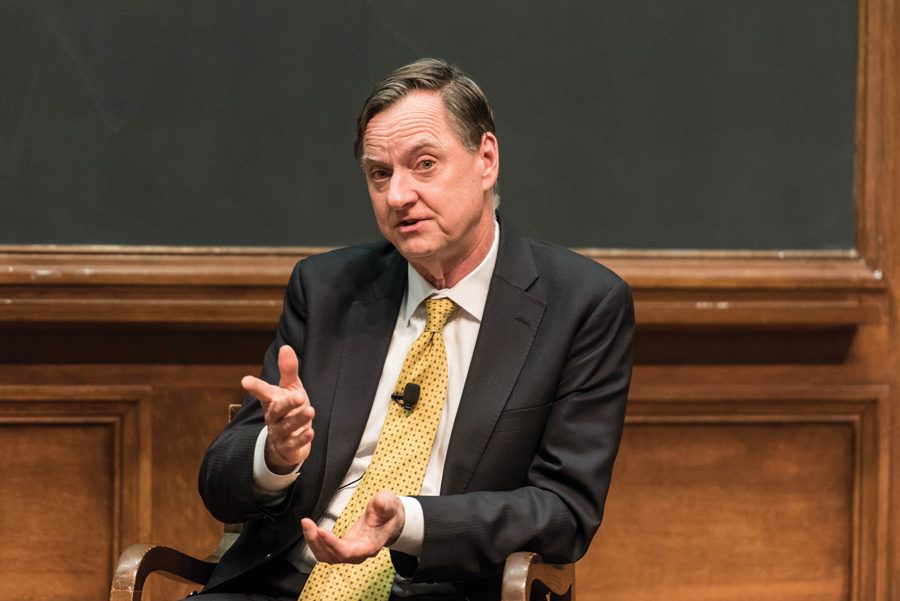 Charles Evans had to take a lot of controversial measures during the Great Recession when he served as president of the Federal Reserve Bank of Chicago.

Evans said at a campus event Tuesday that those measures, however, changed the confidence of everyone involved for the better.

At Tuesday’s event hosted by the Northwestern University Political Union and the economics department, Evans shared his professional experiences and thoughts about the United States’ current economic standing with about 70 NU students and members of the Evanston community.

The first quantitative easing package, released during the recession in March 2009, was intended to stimulate the economy and increase liquidity. The Fed, however, faced political scrutiny for expanding its balance sheet, a quarterly report aimed to increase transparency about their financial activities, Evans said.

“It was a very large package,” he said, “which indicated that the Fed was going to do whatever it took to get the economy first to bottom and then to start growing.”

The Fed, he said, had to “take the heat” at the time: It was trying new economic tactics in order to combat the recession.

When he entered his role at the Fed in September 2007, Evans said the worst of the Great Recession was yet to come — and he knew what was in store. In his first few years on the job, Evans said he had to navigate unknown economic challenges and the try to reassure the American public.

Economics Prof. Martin Eichenbaum, co-director of the Center for International Economics and Development, moderated the conversation. He told the audience that Evans was one of his first doctoral students at Carnegie Mellon University, where Evans earned his doctorate in economics.

Appealing to undergraduates in the audience, Eichenbaum asked Evans, “Unemployment is really low, and wage growth is still crap. How come?” The crowd laughed. “These guys care,” he said, pointing to a group of students in the audience, “because they’re going into the market soon.”

To answer, Evans said he has to consider what the sustainable rate of unemployment is for the United States based on current geographic trends — his staff currently advises him that it is 4.3 percent.

“If the U.S. unemployment rate goes below that, then it’s suggested that there ought to be inflationary pressures, and then you would expect to see wage pressures,” Evans said. “The U.S.’s current unemployment rate is 3.7 percent, so isn’t that enough to generate stronger economical wage growth?”

The conversation drew some students majoring in economics. McCormick senior Wesley Chan, who studies economics and computer science, attended the discussion because he is currently taking a money and banking course.

“I thought this was a great opportunity to actually meet someone who is on the Fed after learning about it in class,” he said. “Dr. Evans has a huge influence on all of the policies I’m studying right now.”

A previous version of this story misstated Wesley Chan’s year and school. Chan is a McCormick senior. The Daily regrets the error.