As polarizing as it is, students from both sides agree immigration law needs reform 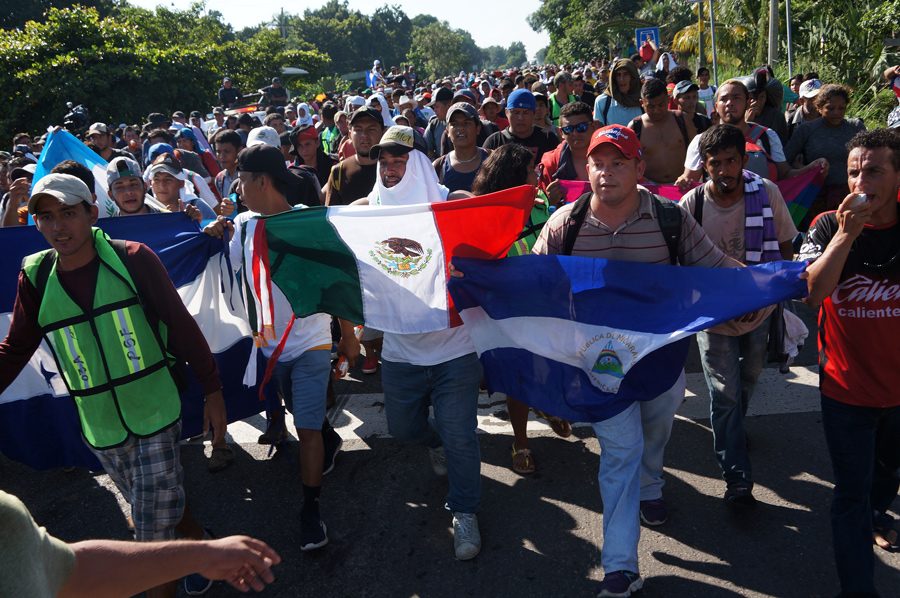 Central American migrants heading for the United States as seen on Oct. 21, 2018 in Ciudad Hidalgo, Mexico. Students are considering immigration issues before the midterm elections.

Ahead of the November midterm elections, Daily reporters are speaking to voters about issues they’ll take to the polls. In this article, students and Evanston residents take on the complexity of immigration.

Immigration has been a dominant topic during the last few years: from the separation of immigrant children and parents this past summer to the rhetoric surrounding immigrants during the 2016 presidential election — and most recently, President Donald Trump’s remarks on the caravan of Central American migrants heading to the United States.

Trump has focused on the issue at rallies and on Twitter. Early in 2017, he ordered a travel ban from seven predominantly Muslim countries, and has placed other restrictions on immigration since. Talks between the administration and Democrats to reform immigration law, including the Deferred Action for Childhood Arrivals program, broke down earlier this year.

Bienen freshman Johannah Carmona considers immigration to be a major issue that will affect who she votes for in the Nov. 6 midterm elections.

“My parents were immigrants to America so I wouldn’t even be here if it weren’t for immigrants,” Carmona said. “I think it’s becoming an increasingly important issue and it’s definitely because immigration is in the very definition of America.”

Weinberg junior Dominic Bayer, a former Daily columnist, also said positions on immigration policies will impact the way he votes. Bayer, the secretary of events for College Republicans, said Republicans “have the ideal position on immigration issues for the most part.”

Since his father is an immigrant from Colombia, Bayer understands that immigration is a “force for good” for the United States. Although he believes the vast majority of immigrants come here, work hard and contribute positively to communities, he said borders must be upheld and limitations must be set.

“You need to uphold the rule of law,” Bayer said. “We need to enforce our immigration laws because, if not, you’re kind of sending the message that ‘anything goes.’”

Some policies that Bayer supports include stepping up deportations of criminal immigrants and increasing both border security funding and Immigration and Customs Enforcement’s budget, “which would help counter illegal immigration,” he said.

Bayer said Democrats are “advocating the policy of open borders,” but Evanston resident John Muench said Democrats would rather focus on assisting refugees and asylum seekers.

“It’s a misleading issue, but I think it’s one that’s worked for Trump,” Muench said. “I think people believe that the Democrats just want unlimited borders and I don’t think that’s ever been true.”

However, both Muench and Bayer agree politicians should focus on the issues, rather than inflammatory rhetoric.

Muench said political rhetoric has caused people to have a “very little understanding” of the immigration system. He said key issues — such as asylum and the separation of parents from their children — should motivate people to vote against Republicans, but he worries that voters are only going to focus on the rhetoric used with the subject.

“I’m skeptical because I think that the rhetoric has been more influential than the reality,” Muench said. “The media has fallen into the track of constantly playing on the field that Trump and the Republicans have created rather than creating their own field and focusing on the key issues such as asylum and refugee status.”

For Carmona, immigration only has two sides — for it, or against it. She said the president has “polarized” sides on the topic, which forces people to choose one.

Coming from Texas, which she describes as a “very Republican state,” Carmona finds herself in a different political atmosphere at Northwestern.

“During the most recent presidential election, people around me have had very conservative views, which is very different coming here, where I’m seeing a totally different side of things,” Carmona said. “Seeing both perspectives has really shown me a little bit of both (sides) of the rhetoric.”