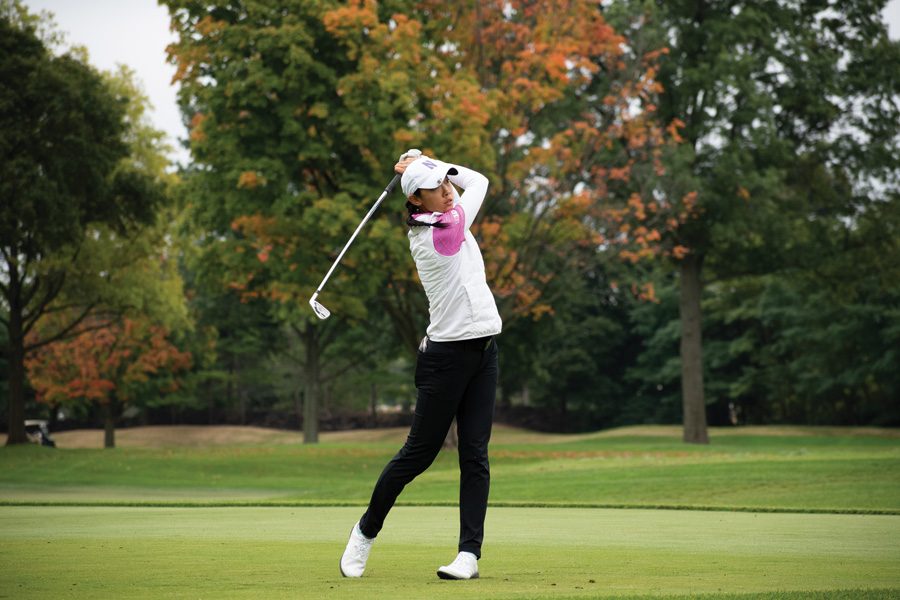 Janet Mao hits a shot from the fairway. The senior finished tied for 13th at the Stanford Invitational.

Northwestern may have entered the Stanford Intercollegiate ranked No. 16 in the country, but after back-to-back NCAA quarterfinal appearances the Wildcats only measure themselves against the best.

NU once again proved why it belongs in that group with a third-place, 1-over-par finish among a stacked field including No. 1 Southern California, which won the tournament, and No. 15 Stanford, which finished one stroke better than the Cats in second place. No. 6 UCLA, No. 10 Arizona State and No. 12 Washington all finished multiple strokes back of NU.

“Our goal and mission is to be an elite school in women’s golf, and I think a lot of what we did this week had us at that level,” coach Emily Fletcher said. “We still have a couple things each day that we could each do a little bit better on, coaching including, and those are the things that we’ll take away and know that we can improve on.”

It was a complete performance from the Cats as all five golfers finished in the top 40 individually.

That effort was led by senior Stephanie Lau and junior Brooke Riley as they tied for 11th at even-par. In the 89-golfer field, only ten competitors finished under par on the demanding Stanford University course.

“My ball-striking was definitely my strength. I wish my putting was a little better, and I’m always working on my game,” Lau said. “It feels really good to have that performance at a competitive tournament, especially to end the fall season. It’s something I can build during the winter, and already looking forward to being back on the course in February.”

The Cats also welcomed senior Monica Matsubara to the team lineup for the first time this season. Matsubara has been Fletcher’s choice as the team’s sixth golfer in the past two Big Ten Tournaments and impressed at the Windy City Collegiate Classic earlier this year.

The veteran did not disappoint, finishing tied for 36th. She was well ahead of freshman Kelly Su, who was in the lineup for the first three tournaments of the year but competed as an individual and finished tied for 56th at Stanford.

“One of our cornerstone beliefs is that we’re not just striving to be the fifth-best player on the team,” Fletcher said. “We’re really pushing Monica to really contribute, go win a qualifier, go win a tournament, don’t start in the five spot and finish in the five spot. We want her to make big contributions, not just be a participant.”

Fletcher added that she expects Matsubara, Su and freshman Jane Lu to be competing for the fifth spot in the lineup throughout the season.

“It’s just a weird thing to think that was my final fall season, and it hasn’t quite hit me yet, the whole senior year,” Mao said. “We ended on a pretty solid note and we have a lot of good things to look forward to in the spring.”