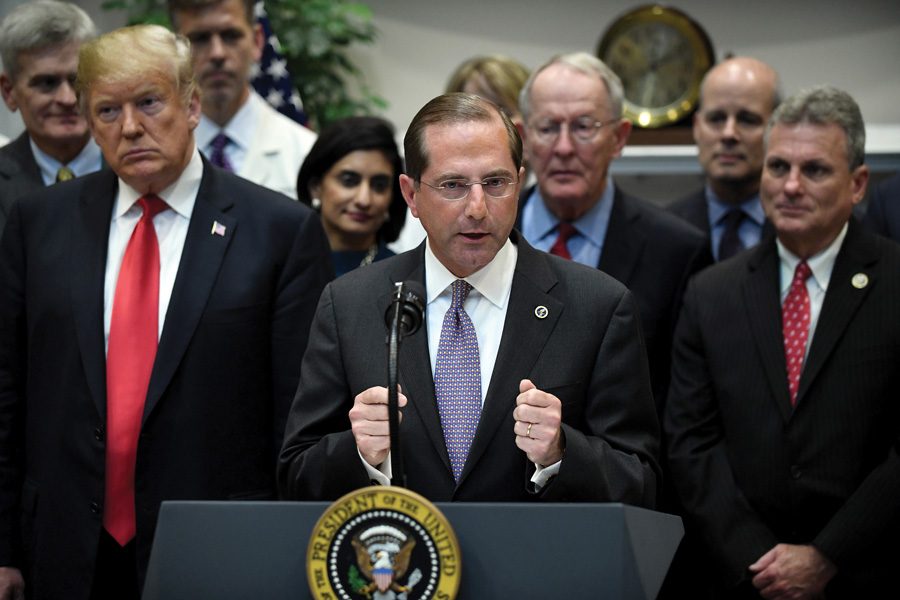 U.S. Health and Human Services Secretary Alex Azar speaks during a signing ceremony this month in the Roosevelt Room of the White House. HHS is attempting to redefine gender as a condition determined by physical sex at birth, according to a report in The New York Times.

Northwestern says it will maintain protections for transgender and non-binary individuals after a report that the federal government may roll back civil rights for those who don’t identify with their gender assigned at birth.

The Trump administration is strongly considering defining gender as biological condition determined by physical sex at birth — a decision that would legally erase transgender people from existence, according to a report by The New York Times.

This leaves transgender and gender non-binary people facing a world where they could have little to no protection under Title IX, a federal law that prohibits programs that receive federal funding from denying anyone benefits on the basis of sex.

A spokesperson for the Health and Human Services Department, which the Times reported was leading the change, declined to comment on the leaked memo obtained by the paper, but noted that the Obama administration’s “broad definition of ‘sex’ was enjoined by a federal court” in 2016.

“Everyone deserves to be treated with respect and HHS’s Office for Civil Rights will continue to vigorously enforce all laws as written and passed by Congress,” said the spokesperson, Caitlin B. Oakley.

But the move has the potential eliminate students’ rights to file Title IX complaints for discrimination based on gender identity with federal agencies, though they would still be able to file a bias lawsuit. The University is also bound by protections under state law.

Lindsey Weiss, who identifies as transgender and gender non-binary, said they are worried about the repercussions of a legal redefinition.

“Trans people, regardless of whether their legal sex is in accordance with their designation at birth, do rely on a lot of Title IX protections,” the Communication senior said. “This law is actually pretty consequential to the protection of trans people in our society.”

Northwestern students don’t have as much to worry about while on campus, said interim associate vice president for equity Sarah Wake.

“Northwestern prohibits discrimination and harassment on the basis of 16 protected classes, including sex, sexual orientation, gender identity and gender expression,” Wake said. “That will not change, nor will the University’s commitment to creating a welcoming environment for all of our students, faculty, and staff.”

Communication junior Shane Eichstaedt, who identifies as gender non-binary, has faith that the University will continue to support transgender and non-binary students and would be “genuinely shocked” if that were to change.

“A private institution like Northwestern has the right to set up their Title IX protections,” Weiss said. “I do have faith in the University’s ability to do that.”