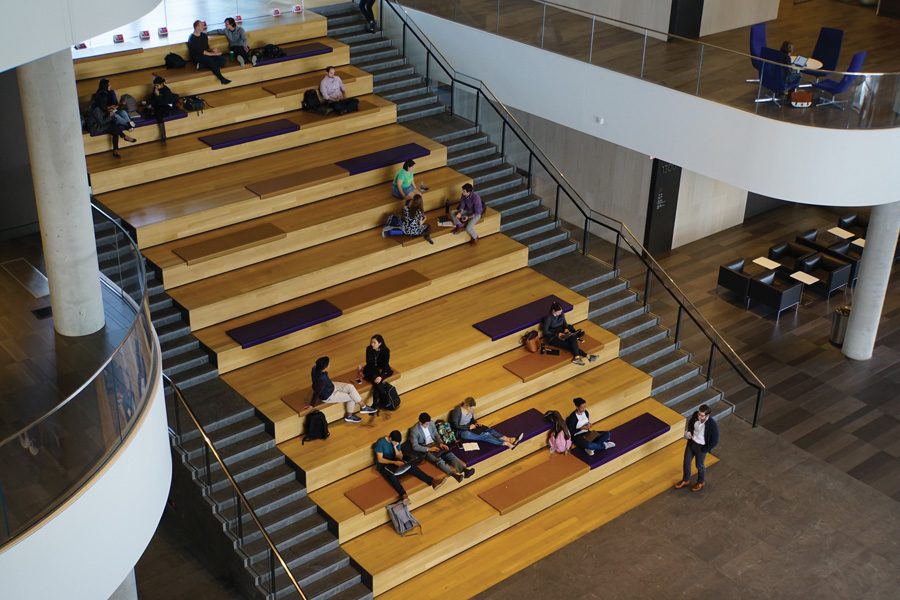 Kellogg Global Hub, center for the Kellogg School of Management. The school admitted a record-breaking number of women in its class of 2020.

Kellogg School of Management’s class of 2020 is 46 percent female, the highest percentage the school has seen and an increase of four percentage points since last year.

The increase in the number of female students can be partially attributed to Kellogg’s programming targeting women, said Victoria Medvec, co-founder and executive director of the Kellogg Center for Executive Women and chaired faculty member at Kellogg.

“It’s a great sign that Kellogg has an increasing number of women,” Medvec said. “A part of what that reveals is Kellogg’s commitment to women and how we have visibly demonstrated a strong commitment.”
Melissa Rapp, director of admissions for full-time master’s in business administration and MS in management studies programs at Kellogg, said in an email that the school has developed a system for organizing women’s programming.

Rapp said Kellogg identifies three critical points in women’s careers — launch, mid-career and the executive stage — and predictable cultural and biological stressors associated with each. Kellogg focuses on addressing challenges women face that their male counterparts do not encounter, she said.

A large and evolving candidate pool allows them to create a diverse community, Rapp said, adding that as Kellogg builds its class each year, it aims to give students “a distinct voice and representation.”

Medvec said Kellogg has been a leader in women’s programming among top business schools in the nation. She said they were the first to offer a program to move women onto boards and into the C-Suite — positions such as CEO and Chief Financial Officer. She added that Kellogg has drawn a lot of attention to the issue of gender disparity in business, and schools around the nation are adopting their model.

“The Kellogg Center for Executive Women is very focused on helping to keep women in and move women up to the most senior levels of organizations, both to C-Suite positions and to boards of directors,” Medvec said.

According to the Pew Research Center, the share of female CEOs of Fortune 500 companies was at an all-time high of 6.4 percent in 2017. Medvec said there are still problems that need to be solved, but Kellogg has been a part of starting the discussion.

First-year Kellogg student Jennifer Daily said Kellogg’s support of women is “well-represented” in the admissions process and continues to be noticeable in her experience as a student. She said it’s a good environment to be in overall.