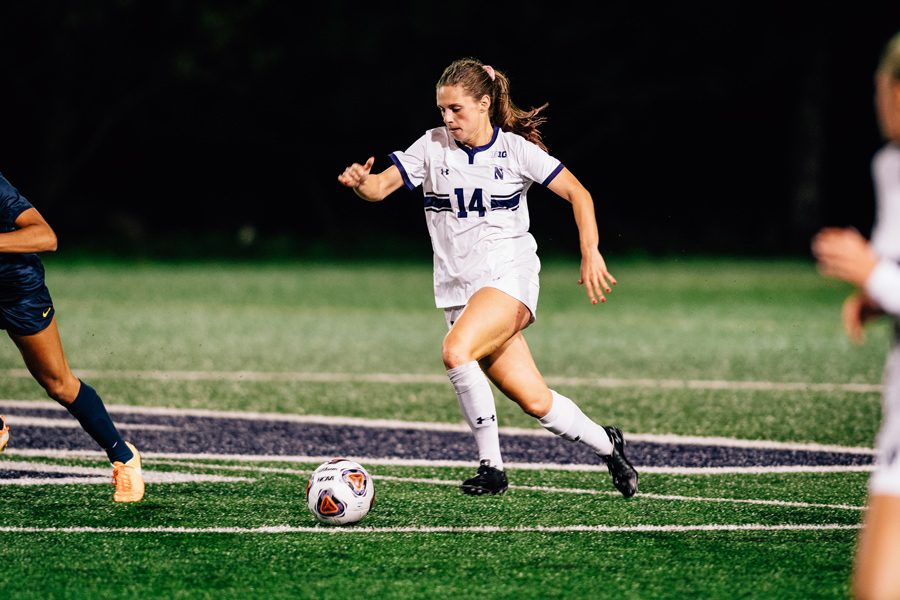 Marisa Viggiano dribbles the ball. The senior midfielder scored the equalizer in the 74th minute.

The painful reality for Northwestern is that if any of the six games it was projected to win went its way, the Wildcats would all be going to practice tomorrow.

Since he believes NU has a legitimate case for an at-large bid in the NCAA Tournament, coach Michael Moynihan is giving the Cats three days off to recover after a regular season where nearly everything that could go wrong down the stretch went wrong.

“We came into some games and teams had amazing shots that we thought would never happen again in their lives,” freshman goalkeeper Mackenzie Wood said. “That was hard for us, but I thought we’ve responded well, looking one game at a time and trying to respond.”

In addition to the games Moynihan said NU outplayed its opponent and did not win, the Cats had only 17 available players out of 29 against the Hawkeyes because of a series of injuries. Moynihan said he walked on the team bus expecting two starters, senior defender Nikia Smith and freshman defender Julietta Thron, to play Sunday, but by the time the game started they both felt they hadn’t recovered enough from recent injuries to play.

Starting a lineup that had barely played together all season, NU conceded a goal in the first 10 minutes, when forward Rose Ripslinger received a cross at the top of the goal box and without looking, turned and fired a shot that ricocheted off the upper and side posts and into the net.

Following a miscommunication on the back line that left Ripslinger open, the Cats were dispirited, knowing they now needed to score twice to directly qualify for the Big Ten Tournament.

Senior midfielder Marisa Viggiano converted a similar goal from the middle of the goal box in the 73rd minute to tie the game, but NU had a number of near misses in the last third of the game, including consecutive missed headers by senior defender Kayla Sharples off a set piece in overtime.

“Walking off the field they were extremely disappointed to not get the win,” Moynihan said. “I think the girls felt they played really well, generated some great chances, probably should have had some penalty kicks that were not granted… Other than that I think they did everything that they could.”

Following Sunday’s tie, Sharples is going to ask her teammates if they want to watch the Spartans-Cornhuskers game together and hope Michigan State executes the upset and puts the Cats in the Big Ten Tournament.

In 2016, Ohio State qualified for the NCAA Tournament even though they missed the Big Ten postseason, giving precedent to the Cats’ NCAA candidacy. NU is 1-0-2 against ranked teams, ranked 57th in RPI and have just one loss that hurts the team’s case, according to Moynihan, so he’s planning on training for the NCAA Tournament in Evanston even if Nebraska wins.

Even though they won’t practice until after the Michigan State-Nebraska game, the Cats are holding onto the belief that they will play another game this year.

“It was definitely in our control and we had the opportunity, and we’re all just pretty shocked,” Sharples said. “If we had the full strength of our team, who knows what would have been.”