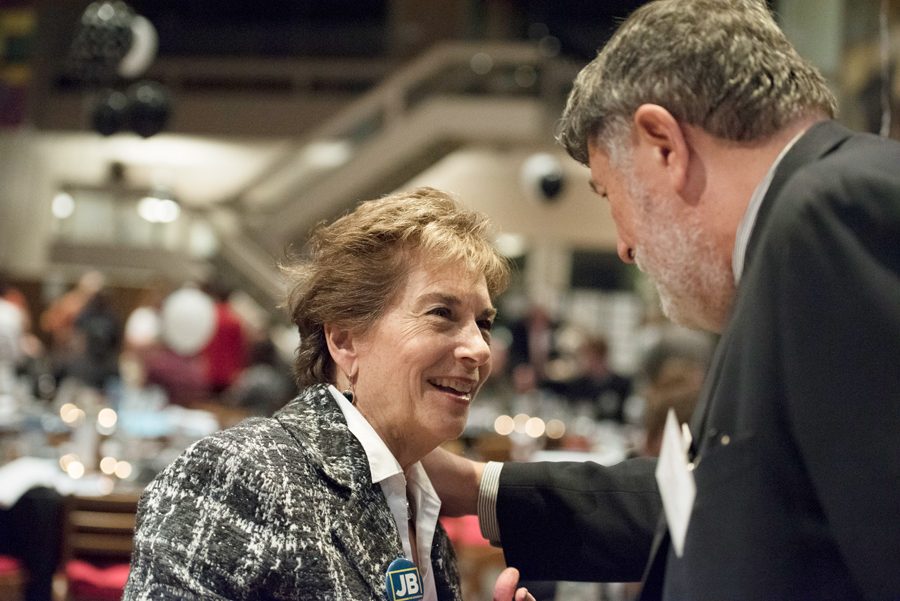 While honoring the work of prominent Cook County Democrats, the Democratic Party of Evanston on Sunday rallied its members for the midterm elections at its annual dinner.

Though many acknowledged losses Democrats have faced since 2016, attendees overall had a hopeful outlook for the midterms. Evanston Township Democratic Committeeman Eamon Kelly said that while the U.S. Senate is anyone’s game, he felt Democrats would likely take back the House and, with the party’s continued efforts, the governor’s seat as well.

Illinois State Treasurer Mike Frerichs is up for election this November. Frerichs, who won in 2014 by just 9,225 votes, emphasized the importance of being politically active.

“I won by less than one vote per precinct,” he said. “Every person in this room in the next two weeks can find one person who doesn’t vote and convince them to do the right thing. And if you do that, you can re-elect Jan Schakowsky, you’ll elect J.B. Pritzker, you’ll elect Kwame Raoul as Attorney General.”

State Sen. Daniel Biss (D-Evanston) — who lost the gubernatorial primary to Pritzker — said despite his disappointment in March, he still intends to fully endorse and campaign for Pritzker and all other Democrats up for election.

Biss shared his personal reaction to reading that the Trump administration was considering delegitimizing the civil rights of transgender individuals.

“I have a child who is gender non-conforming,” Biss said. “And I woke up this morning to a New York Times article about President Donald Trump flirting with the policy to erase my child and several million people like them from the very federal policies that affect civil rights, healthcare and education. We have to take even more action than we were going to take before.”

Fleming was the first to be recognized Sunday night, receiving the Tisdahl Award for exemplifying progressive values. An Evanston native and founder of the Organization for Positive Action and Leadership, Fleming said she “doesn’t think what (she does) is that extraordinary,” and that she simply wanted to take action to improve her hometown.

Garcia — Recipient of the Yellow Dog Award for his progressive leadership — was introduced by Schakowsky. She noted it was an important time to have someone like Garcia, a Mexican immigrant and longtime representative of minority communities, in Congress.

“This is a moment for Chuy Garcia, because we have never in our history seen such a tax on immigrants,” she said. “The fear in our communities is palpable. Children are afraid to go to school because they don’t know if their parents will be there when they come home.”

The award’s name, “Yellow Dog,” references “Yellow Dog Democrats:” individuals who will vote for the Democratic candidate no matter what.

“Yellow Dog,” Garcia said. “I was a little worried (to accept this award) because of the name. The truth is, I didn’t know what a Yellow Dog was, I’m still not sure what a Yellow Dog is, but if Jan Schakowsky presented the award it’s got to be a good award, so bow wow!”