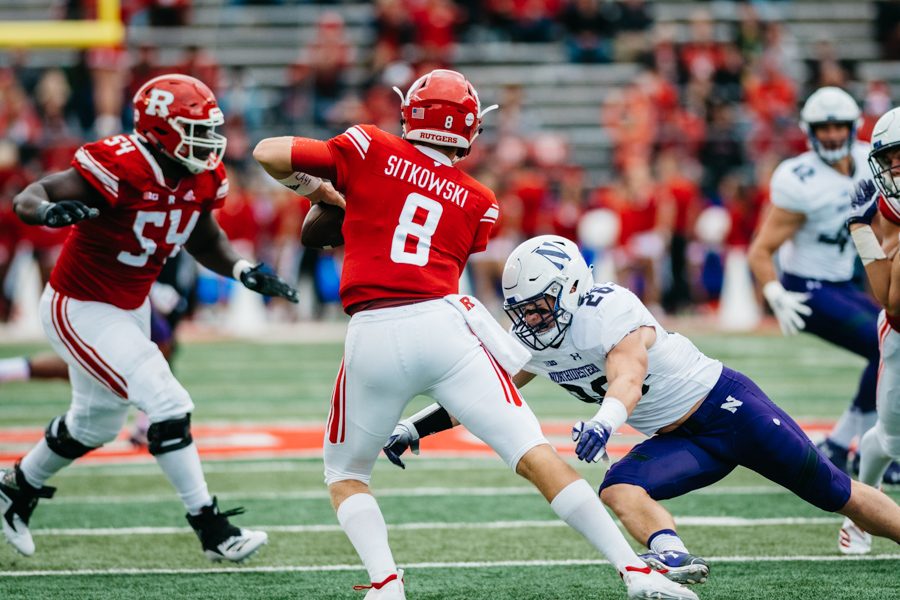 Chris Bergin closes in on a sack. The Wildcats struggled but managed to defeat Rutgers on Saturday.

PISCATAWAY, N.J. — Northwestern, by most measures, played very poorly. But it was still, barely, enough to win.

Despite trailing for long stretches of the second half and failing to score for multiple quarters in succession, the Wildcats (4-3, 4-1 Big Ten) managed to make enough plays to defeat lowly Rutgers (1-7, 0-5) 18-15 at HighPoint.com Stadium on Saturday.

The opening drives suggested NU would roll — as expected, given the Cats’ status as three-touchdown favorites. Rutgers started the game from the 1-yard line and NU eased down a short field on its first drive for a touchdown, but that would be the visitors’ most successful drive until late in the third quarter.

The Cats’ defense was expectedly resolute for most of the game, but the Scarlet Knights turned the game in their favor with a short touchdown drive and a safety late in the second quarter.

NU slowly reasserted itself in the third period, then went ahead for good with a 63-yard touchdown drive midway through the fourth quarter. Freshman running back Isaiah Bowser finished off the drive with his second touchdown run of the game — he also tallied a career-best 108 yards — making him one of the rare offensive standouts on the day.

1. The Wildcats played to the level of their competition. This is becoming a theme for NU, which rose against Michigan and Michigan State but needed last-minute heroics to beat winless Nebraska and lost to Akron. On Saturday, the Cats never separated from a Scarlet Knights team that hadn’t led a game since the season-opener and lost their last two games to middling teams by an average of 24 points.

2. Clayton Thorson’s play was way below his recent standard. The senior gunslinger looked like a different man than he did in NU’s last two games. The numbers on Saturday were ugly — 17-of-34 for 150 yards — but didn’t convey the full degree of the issues. Thorson routinely overthrew receivers downfield and struggled to evade pressure. Still, Thorson led the go-ahead fourth-quarter drive and played a big role in two crucial fourth-down conversions.

3. Northwestern’s defense did its job. The Scarlet Knights entered the day with the second-worst offense in the country, and the Cats made sure that didn’t change. Rutgers quarterback Art Sitkowski was a miserable 15-of-31 for 81 yards, and the hosts didn’t record 200 yards of total offense. Defensive end Joe Gaziano was especially effective pressuring Sitkowski and recorded a highlight-reel sack in the first half.