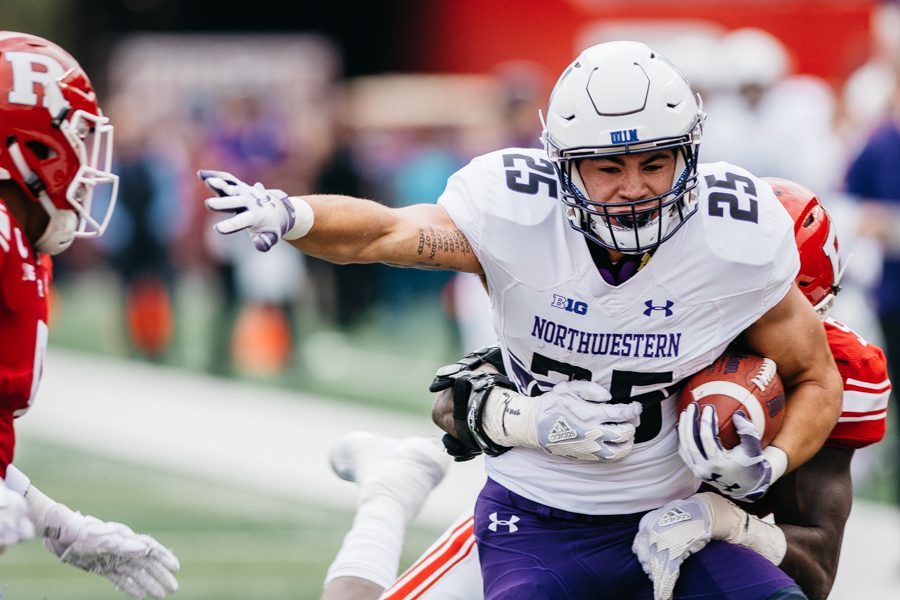 Isaiah Bowser fights to break through a Rutgers tackle. Entering the day with only two career carries, Bowser stepped up with over 100 yards and two touchdowns.

PISCATAWAY, N.J. — Northwestern needed something, anything, to work offensively.

So the Wildcats turned to a freshman running back with two career yards — and it worked. With Clayton Thorson off his game, the Wildcats’ top several veteran running backs out injured and receivers struggling to make impact plays, Isaiah Bowser shined. He rushed 24 times for a career-high 108 yards, scoring both of the Cats’ touchdowns in an ugly 18-15 win over Rutgers (1-7, 0-5) at HighPoint.com Stadium on Saturday.

“It feels great. All the guys in the locker room are supporting me and saying congratulations,” Bowser said. “This being the first game I got to play for more than a couple series, it’s a great feeling.

Bowser made his first impact on NU’s opening possession, finishing the short touchdown drive with a 3-yard score, the first of his nascent career. He then factored in even more significantly when the Cats faced adversity.

The freshman ran for 53 yards — nearly half his total tally — in the closing 15 minutes, when the visitors came back from a 5-point deficit. Bowser bookended NU’s go-ahead touchdown drive midway through the final quarter, opening the sequence with a modest gain but closing it with a seismic five-yard dart in which he was nearly untouched.

Bowser continued to make his mark as time ticked down. He carried the ball eight times on the visitors’ game-clinching, six-plus minute drive, toting the rock on six consecutive plays at one point.

“Isaiah Bowser stepped up there, especially at the end, really ran physical,” coach Pat Fitzgerald said. “We need him.”

The 6-foot-1, 216-pound Bowser gained 40 yards and a pair of first downs on the game-killing drive, and more importantly took almost four minutes off the clock nearly singlehandedly.

“Nerves weren’t really an issue. … I was already in the flow of the game,” Bowser said. “I knew I had to hold on to the ball, that was the main thing, then hopefully get a first down. Luckily I could do that.”

Bowser spent the first half of the season being brought along slowly. He had a measly two carries in the first three games he played, and Fitzgerald said last week that he was hoping to limit Bowser to four games, maintaining his eligibility to be redshirted.

But with both John Moten and Solomon Vault out injured on Saturday, Bowser, fellow freshman Drake Anderson and gritty veteran Chad Hanaoka were primed to assume the bulk of the Cats’ running game. They responded despite recent woes — NU rushed for 68 yards combined in its three prior games, then 128 here — and bailed out Thorson on a day when he threw for a season-low 150 yards.

The Cats’ 278 total yards were still measly. Nevertheless, on a day when NU desperately needed a victory, Bowser stepped up to help make that happen.

“He played great. He hit some holes … and broke some long runs too,” Thorson said. “I was really proud of him. He would’ve liked to play a little more at the beginning of the season, but he waited his chance and he’s playing great right now.”