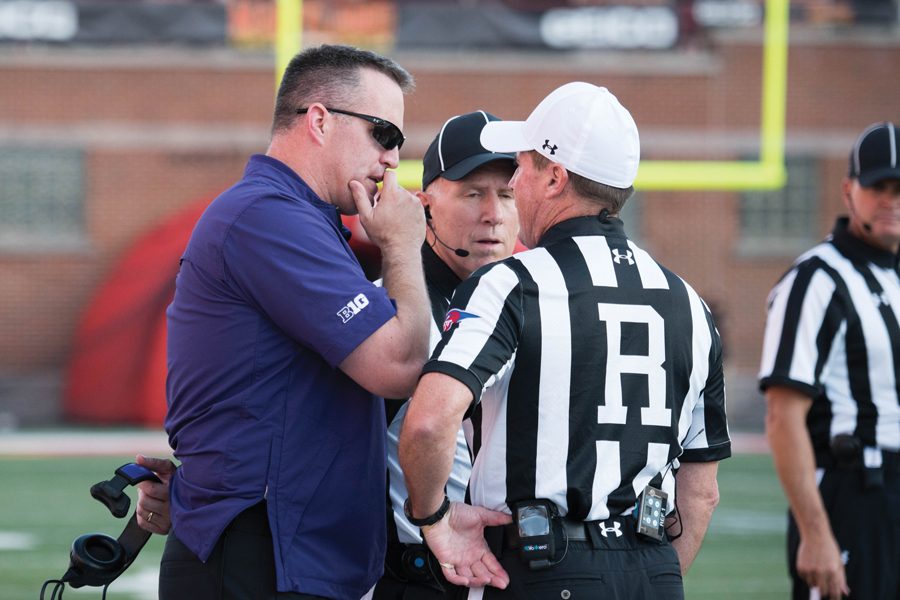 Northwestern led Purdue late in the fourth quarter of its season opener, but the Wildcats were about to face a fourth down and a likely punt. Then Lorenzo Neal threw sophomore running back Jeremy Larkin to the ground well after the whistle, and the ensuing unnecessary roughness penalty sealed the victory for the visitors.

After losing its next three games, NU — which had struggled mightily in the second half all season — blew a lead against Michigan State in the third quarter. After Naquan Jones lit up junior superback Cameron Green to force a third down in NU territory, he stepped over Green for no reason and drew an unsportsmanlike conduct penalty. The Cats scored seven plays later, and won the game.

After blowing yet another lead against Nebraska on Saturday, the Cats got the ball back inside their own 1-yard line, down 7 with just over two minutes left and no timeouts. And the Cornhuskers — the most penalized team in the country — proceeded to rough the passer to give the hosts some breathing room. NU drove down the field, scored and won the game in overtime.

All this isn’t to say that NU didn’t deserve to win these games. The Cats have played well at points of all their games, and their matchup with Duke was the only one where they trailed for much of the game. But all three of those penalties were ill-advised and completely unnecessary, and if they hadn’t happened, NU could be sitting at the season’s mid-point at 0-6.

By the way, the Cats are the second-least penalized team in the country, behind only Duke. And there’s something to be said for the fact that when NU does commit penalties, they’re almost never the ones — a roughing the passer in the end zone, an unsportsmanlike penalty or a late hit — that make you want to declare you aren’t a sports fan anymore.

Pat Fitzgerald’s ability to reign in this type of behavior is rarely talked about. NU’s impressively low penalty numbers are usually looked at as a footnote in a list of things the team does well. The Cats have been one of the top-15 least penalized teams for three of the last four years.

It’s more important than that, though. Winning these games — and not committing awful penalties — isn’t just a fluke. Can anyone remember the last time NU was flagged for a dumb penalty, especially one late in a game? I can’t.

Fitzgerald does a lot of things well as a coach, and that’s why he’s been at NU for 12 years and is under contract through 2026. He gets a lot out of the talent he has and he motivates his players at an elite level.