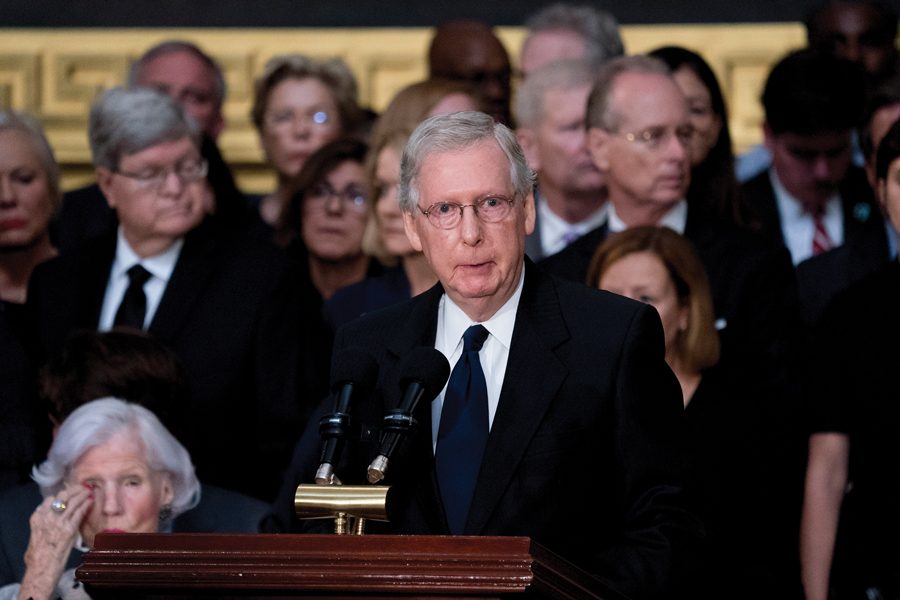 Senate Majority Leader Mitch McConnell (R-Ky.) speaks at the U.S. Capitol in Washington, D.C., on August 31, 2018. McConnell blamed the deficit on failure to contain spending on entitlements like Medicare, though he predicted a solution to reducing the gap wouldn’t come soon.

Ahead of the November midterm elections, Daily reporters are speaking to students about issues they’ll take to the polls. In this article, students and faculty take on the United States’ budget deficit.

The United States federal budget deficit was $779 billion for the 2018 fiscal year, a 17 percent increase from the previous year. This has prompted uncertainty among Americans over how much longer the deficit can continue to increase without devastating consequences.

The deficit fluctuated during the Obama presidency, but has increased significantly during the period in which President Donald Trump has been in office, despite numerous promises he made during his campaign to pare it down.

“I think Trump is finding it’s a lot harder to carry out what he intended to,” Weinberg freshman Hitesh Juneja said. “The deficit is so large and has been a problem for so long that it’s going to take a long time before it’s solved.”

One major factor in the significant increase in the deficit is due to GOP sponsored tax cuts, which will add an estimated $3.8 trillion to the deficit over the course of the next 10 years.

Economics Prof. Mark Witte said the economy is in “very good shape in most measures,” and that the tax plan wasn’t necessary to stimulate the economy.

With the economy at a peak, Witte believes it is a “pretty good time to push towards a more balanced fiscal position and try to contain and even reverse the growth of debt.”

“What the US is doing seems to go the opposite from textbook economics,” Witte added.

However, there are some who believe that the president is not necessarily to blame for the increasing deficit.

Weinberg freshman Sonia Bhattacharyya said she’s “not sure how much partisan politics” has to do with the issue. She thinks Social Security and the increase in the population of older Americans is a bigger problem.

As the Baby Boomer generation grows older, the number of people qualified for Social Security is steadily increasing. This puts considerable strain on the system. Bhattacharyya’s comments echoed those of Senate Majority Leader Mitch McConnell (R-Ky.), who earlier this week blamed the deficit on failure to contain spending on entitlements like Medicare, though he predicted a solution to reducing the gap wouldn’t come soon.

Regardless of the reason, the deficit continues to grow.

In terms of what this growing deficit means in the long run, Witte said what economists are concerned about is the debt to GDP ratio.

Because the ratio can help indicate whether a country has the means to pay back its debts, economists consider this figure more important than the dollar value of the debt itself.

“If the debt grows forever, but at a slower growth rate than the GDP, there’s no problem at all,” Witte said.