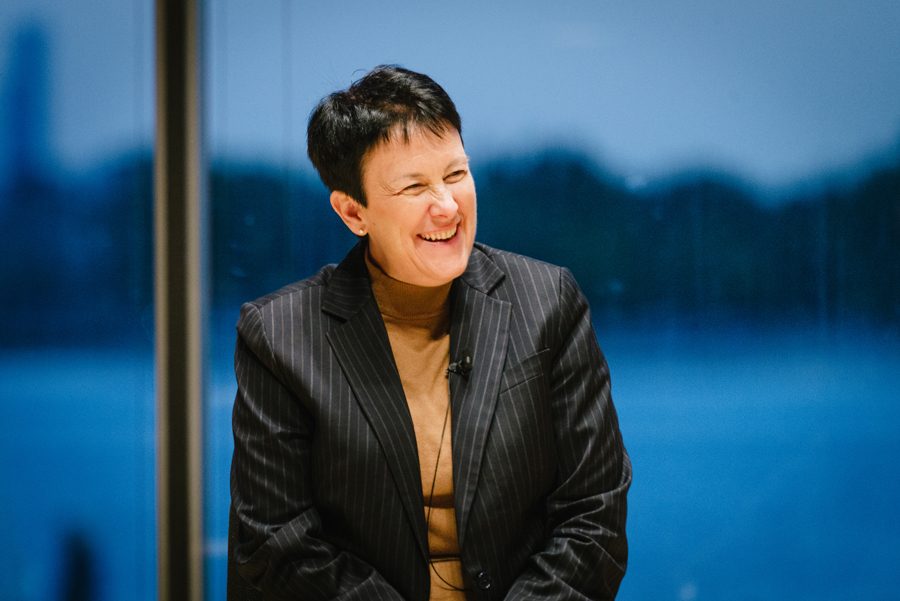 Two-time Grammy Award and Pulitzer Prize winner Jennifer Higdon at Tuesday’s panel on LGBTQ+ artists. Higdon is openly lesbian and has been with her wife for 37 years.

Two-time Grammy Award and Pulitzer Prize winner Jennifer Higdon has been playing music for 40 years — about the same amount of time as she’s been with her wife. She opened up about her art and sexuality at an interdisciplinary panel discussion on LGBTQ+ artists hosted by the Bienen School of Music on Tuesday.

As a winner of the 2018 Michael Ludwig Nemmers Prize, Higdon will take part in two week-long residencies where she will be on campus, interacting with Bienen students in master classes and performances. In addition to the programming this week, Higdon will return to campus in February 2020.

Higdon is a composer of contemporary classical music, as well as the writer of the 2015 opera “Cold Mountain,” a work based on its namesake novel about a confederate soldier who left the war in pursuit of love. She said she is looking forward to learning from and working with student musicians.

“(Bienen) is a fantastic school with a lot of talent and curiosity,” Higdon said. “That always makes a residency a rewarding experience for me, and hopefully I can give something back to the community.”

Tuesday’s panel was a way for students to hear from Higdon not only about her musical career, but also her personal life. Higdon is openly lesbian and has been with her wife for 37 years.

Higdon added that she does not step back to analyze how this identity affects her music, instead saying that having loving support from someone allows her to express her emotions in music.

“I always hope that folks will feel free to be themselves — to feel empowered and accepted in their lives and in their communities,” Higdon said.

Director of Concert Management at Bienen Jerry Tietz organized the panel along with the music school’s dean, Toni-Marie Montgomery. Tietz said he hoped the event would cover a wide variety of artistic mediums to make it accessible to students outside of the music program.

“Once the recipient of the (Michael Ludwig Nemmers) Prize has accepted it and once we sort of check that box, then the conversation turns to what sort of activities do we think would be impactful and compelling and enriching for our students,” Jerry Tietz said.

In the conversation, Johnson said he wanted to focus the conversation on how artists navigated the stereotypes associated between LGBTQ+ and art communities, adding that LGBTQ+ people and art are often thought of as related entities.

In addition to this, Johnson said he wanted to highlight LGBTQ+ influence in modern activism, citing its role in many large social issues such as the #MeToo movement and Black Lives Matter.

“One of the things that I don’t think a lot of students know is that a number of the big social movements that happen currently were started by artists,” Johnson said. “Understanding how art and activism is intertwined is important for students.”