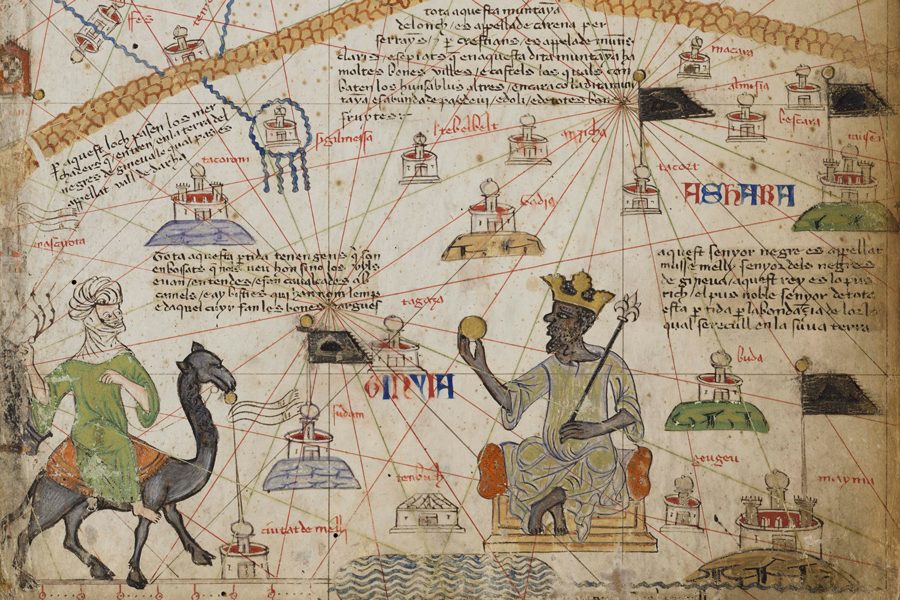 An atlas of maritime charts on display at the Block Museum of Art’s “Caravans of Gold,” an exhibit that features small fragments from Medieval Saharan trade routes alongside intact artworks from Africa, Europe and the Middle East. The exhibition recently received a $350,000 grant from the National Endowment for the Humanities.

“Caravans of Gold,” a Block Museum exhibition that will debut this January, has received a $350,000 grant from National Endowment for the Humanities — the largest the museum has ever acquired.

Cooperating with partner museums and institutions in Mali, Morocco and Nigeria, the exhibition — “Caravans of Gold, Fragments in Time: Art, Culture, and Exchange across Medieval Saharan Africa” — will present more than 250 pieces, many of which are rare loans that have never been transported to the U.S. before. After its showing at the Block Museum, the exhibition will be displayed at the Aga Khan Museum in Toronto in the fall of 2019, followed by the Smithsonian’s National Museum of African Art in the spring of 2020.

The exhibition features small fragments from Medieval Saharan trade routes alongside intact artworks from Africa, Europe and the Middle East that reveal the previously unknown reach of Saharan networks, said Alexandria Kotoch, the curatorial research associate at the Block Museum.

“The material remains from Sahara Africa are quite few,” she said. “It’s not robust like elsewhere. But these fragments can be turned into a powerful tool to tell an untold story.”

Kathleen Bickford Berzock, the exhibition’s curator, planned the exhibition for eight years, carefully contrasting various fragments with pieces of art to help the audience imagine the original state of the fragments. This juxtaposition promotes an understanding of the exchanges of ideas, people and commerce across West Africa and beyond, said Kate Hadley Toftness,the grants manager at the Block Museum.

The goal of this comparison, Toftness said, is to help the audience place Africa into the context of the rest of the world.

“This is an absolutely groundbreaking scholarship,” Toftness said. “It has the potential to change the way that we think about the medieval period.”

Toftness said she is pleased to see that this art is still given the respect and funding it deserves, given the recent Trump administration proposal to slash the NEH’s budget by about 30 percent that was ultimately rejected.

In addition to the grant from the NEH, the Buffett Institute for Global Studies provided additional funding.

“We are extremely grateful that the funding still exists at a national level,” Toftness said. “The show would be essentially impossible without this level of support.”

Walton said the exhibition highlights the “compelling traces” of economic activity in Sahara Africa, which he said is necessary for reinterpreting a biased history.

“I hope the audience will come away with recognizing the primary place in technology and trade that Sahara Africa played within the larger context of European world history,” said Walton.