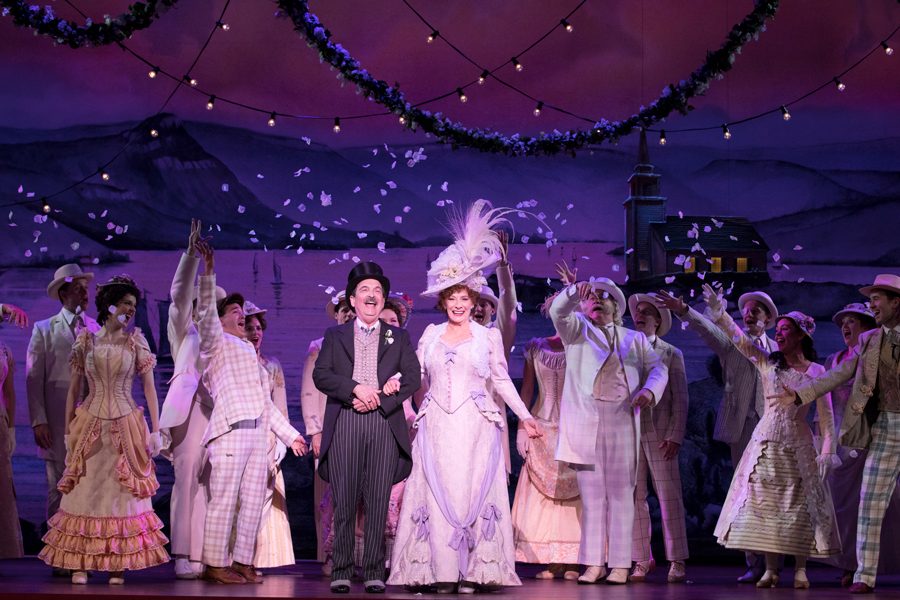 Betty Buckley and company take their bows in the national tour of “Hello, Dolly!” Beth Kirkpatrick (Bienen ’03) plays the role of Mrs. Rose and other ensemble members, as well as performing as an understudy for the iconic role of Dolly Levi.

Beth Kirkpatrick (Bienen ’03) missed her 15-year reunion this past Homecoming weekend. Instead, she graced the stage alongside theatrical icon Betty Buckley in the national tour of “Hello, Dolly!”

Kirkpatrick will take the stage at Chicago’s Oriental Theatre from Oct. 23 to Nov. 17. Kirkpatrick plays Mrs. Rose and other miscellaneous ensemble members during the show’s national tour.

In addition to her ensemble roles, Kirkpatrick will fill the shoes of Buckley as Dolly Levi, the show’s protagonist, when the opportunity calls. Kirkpatrick will join the likes of Barbara Streisand and Bette Midler, who both have played the iconic role.

“The opportunity to understudy the role of Dolly is huge,” Kirkpatrick said. “It’s one of those epic music theatre roles. What a great way to get to know this incredible material.”

Kirkpatrick said her time at Northwestern has prepared her for the challenge.

As both a voice major and a member of the musical theater program, Kirkpatrick said she received a well-rounded education through the interdisciplinary programming. She praised Northwestern’s ability to not only build strong actors, but support its artists’ individual abilities.

“At the time, a lot of the top music theater schools were working to make cookie-cutter people, whereas Northwestern was proving they were a school where individuals could shine — what you brought to the table was really unique,” Kirkpatrick said. “That’s the trend of theater now.”

Kirkpatrick said she has embraced her own uniqueness as a character actor, joking that she has looked like a 30-year-old since she was a teenager. Never the ingénue, Kirkpatrick said in middle school she played the moms, and in high school, the grandmothers.

Karen Brunssen, Kirkpatrick’s voice teacher at NU and an associate professor at the Bienen School of Music, echoed this sentiment, but said her big personality fits the roles she plays. In addition to Kirkpatrick’s match for this niche, Brunssen said Kirkpatrick is a polished performer, noting she’s an alto who can also hit a high C.

Even with talent in tow, Brunssen said Kirkpatrick’s success has stemmed from her hirable attitude.

“She stood out because of the way she went about her career,” she said. “She didn’t have to be the star, she was just as willing to be part of the ensemble.”

Whether Kirkpatrick is taking the stage as Dolly or performing in the ensemble, the show’s timeless story will touch the hearts of Chicago audiences, actor Nic Rouleau said. Rouleau plays Cornelius in the national tour production, a dream role for him. As a self-proclaimed “superfan,” Rouleau saw the production six times during its most recent Broadway run.

Rouleau said the national tour is a “quintessential production of “Hello, Dolly!’” complete with extravagant costumes, sets, lights and orchestration. And although the show is beautiful, he noted it is also relevant. In the musical, Dolly always enters the scene at the right time, and Rouleau said the show is now here during a period when Americans need it the most.

“The story and the characters are nothing new, yet it hits in today’s political climate,” Rouleau said. “The message is all about love — it’s a message I think a lot of America wants to hear right now.”