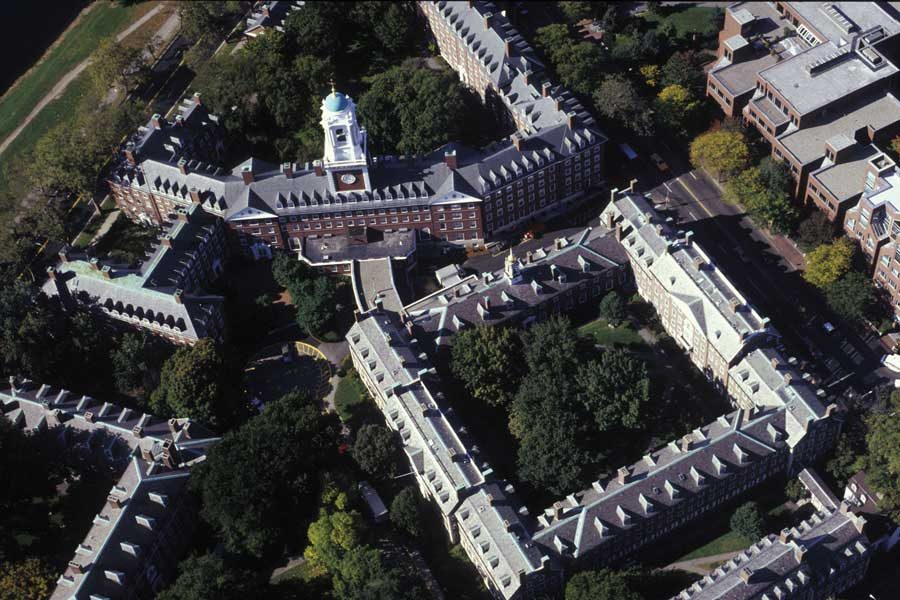 An aerial view of the Harvard University campus in 2013. Harvard is facing a lawsuit charging the university with discriminating against Asian-Americans that could have wide-ranging impacts on the use of race in college admissions.

As the Harvard admissions lawsuit placing a microscope on the practice of affirmative action in higher education goes to trial, Northwestern officials say the outcome shouldn’t affect University admissions.

“Northwestern prefers not to speculate on the case, as it involves another university. It will be decided on the basis of the facts involving that university,” Northwestern spokesman Bob Rowley said in an email to The Daily.

University President Morton Schapiro said in an interview with The Daily earlier this month that while Northwestern is following the case, he doesn’t believe the courts will do anything that will “change the way we operate.” The University, Schapiro said, has various admission goals for underrepresented groups — like aiming to admit a class of 20 percent Pell Grant-eligible students — but doesn’t set quotas, as it is prohibited by the Supreme Court.

Ultimately though, Schapiro added that what happens “really depends on how broad on the ruling is.”

“We’ve been very careful to make sure that any legal scrutiny brought against us will be something that we can hold our heads up and say we’re entirely consistent with the law, so am I worried about the resolution of those cases? A little bit, but I don’t think any surprise…is going to affect the way we do business,” he said.

The ruling has the potential to trigger a reevaluation among schools that consider race to make admission decisions, especially at elite universities like Northwestern. Whether the outcome creates new standards or narrowly affects only Harvard will depend on the breadth of the ruling.

Christopher Watson, dean of Undergraduate Admissions, deferred comment to Rowley. Information regarding the specific use of race and ethnicity in Northwestern’s admission decisions is not publicly available.

The case against Harvard is a renewed effort by conservatives to eliminate the use of race-conscious admissions in the nation’s colleges. In 2016, the Supreme Court upheld the University of Texas at Austin’s consideration of the racial and ethnic backgrounds of applicants as a factor in its holistic review process. But with the confirmation of Brett Kavanaugh to the Supreme Court earlier this month, proponents of affirmative action have expressed unease that the appointment of the judge — and the resulting 5-4 conservative majority — will push the court to roll back previously established safeguards on the practice.

All justices, however, should initially be given the “benefit of the doubt” — especially given Kavanaugh’s lack of prior rulings on affirmative action cases in college admissions, former Pritzker School of Law dean Daniel Rodriguez said. Still, the former federal judge’s addition to the court could prove critical, he added.

“There is a real risk, no two ways about it, that the replacement of Anthony Kennedy with Brett Kavanaugh will make a difference — as it will in so many other areas of law — on the law of affirmative action,” Rodriguez said.

After the Trump administration revoked Obama-era guidelines encouraging the use of race in college admissions in July, Northwestern announced it would not change its admissions practices.

Later that month, 16 highly selective universities including Columbia, Duke, Johns Hopkins and Stanford jointly filed an amicus brief with the federal district court in Boston in the Harvard lawsuit. Considering race as a factor in the holistic review of applicants, the brief said, is “necessary to achieve the benefits of diversity” in its backing of Harvard’s practices.

Other than the University of Chicago, Northwestern was the only top-10 university in U.S. News’ 2018 rankings to not sign onto the brief.

Rowley did not immediately return request for comment on NU’s decision not attach its name to the brief.

Earlier this year, the Justice and Education Departments launched a separate civil rights investigation into whether Yale discriminates against Asian-American applicants, amid a similar probe into Harvard. Regardless of the ruling in the Harvard lawsuit, Rodriguez called additional federal inquiry into college admissions “probable.”

“The important question is in light of these interrogations — ongoing in the case of Yale, or more threatened in the case of others — whether universities and colleges will feel obliged to not only look anew at their policies,” he said, “but whether they’ll change them to try to avoid the scrutiny that comes from a skeptical administration.”