The Great Recession was 10 years ago. Some suffered scars, others escaped injury 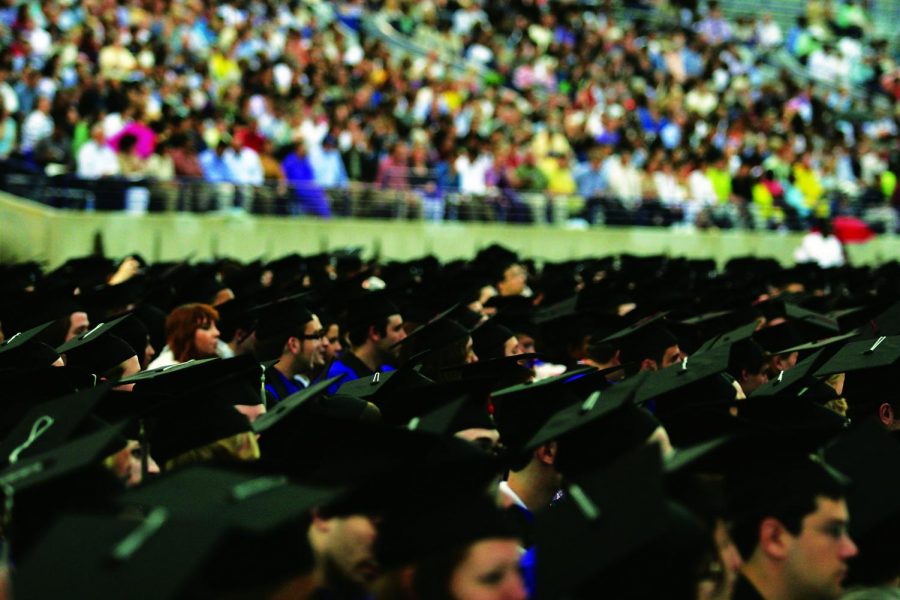 Graduating students look forward to the future during the University’s 2009 Commencement. Ten years later, some are still scarred by the Great Recession.

One of the most important weeks of Evan Gray’s life was about to get hit with some bad news.

It was spring 2009. Gray (Weinberg ’09) had secured his dream job at United Airlines, a company he had been eyeing since he switched his studies to transportation during his freshman year. The offer didn’t come without some hard work — the career hunt was feeling a little more complicated than it had before.

Rumors were circulating among students that firms were cutting back on hiring, even after all the customary interviews and dinner meet-and-greets. Friends who had lined up posts in the financial industry had their offers rescinded, or at least delayed for an uncertain time.

Speculators feared that United would soon file for bankruptcy approaching the summer of 2009. As Gray was preparing to walk the stage after four years of countless late-night hours in the library, United said it was pushing back his expected summer start date.

“I didn’t really contextualize it at the time,” he said. “The career search was a dose of reality.”

Gray wasn’t alone in not understanding what was going on. Months earlier, financial woes on Wall Street wreaked havoc. To the surprise of everyday Americans, the mistakes by troublesome financial companies crushed their economic security.

The mass layoffs were unprecedented: by the end of the first quarter of 2010, almost 9 million people in the U.S. lost their jobs. The unemployment rate would peak at about 10 percent, and thousands of workers left the labor force altogether. In the time since, recovery has been dreadfully slow: only the most recent jobs reports shows signs of wage growth.

For some, the Great Recession is a distant memory — a catastrophe that brought fears of Great Depression 2.0, and a near miss that only exposed the misdealings of Wall Street. But for students just starting their careers, the sharp tumble of the economy complicated a job search already fuming with anxiety.

In the fall of 2008, back when Gray was just beginning his senior year, job recruiters had come to campus hoping to meet the bright and talented students Northwestern had to offer.

Sitting them down for interviews, employers might have asked students where they expected to be in 10 years. Many of them, not anticipating what was to come, would’ve answered incorrectly.

Gray clung to a hopeful career at United. His parents, however, suggested he try to secure a backup job, so he worked a retail job to save up some money. Gray would end up beginning his position in November, but to him the initial uncertainty and confusion signalled something bigger was going on.

Jacob Convicer (Weinberg ’09) didn’t completely understand what was happening that fall. Ready to enter the professional world, he planned to follow his father’s footsteps in investment, which he’d been fascinated with since childhood. In fact, he was ready back in 2005, entering Northwestern already certain he would walk away with an economics degree.

By the time he met with recruiters, Convicer’s resume proudly boasted three internships in Boston and Chicago. He was eyeing major investment research firms like Morningstar, Thomson Reuters and McKinsey.

Thomson Reuters sent him an offer he was planning to use as a negotiation tool with other firms. Convicer asked for a couple weeks to hear back from companies and make his final decision. He was set for a comfortable salary as a financial analyst for a top research firm.

For Convicer, the Sept. 15 collapse of Lehman Brothers 10 years ago came and went, without much of a reaction. But the next day, he received an apologetic phone call from someone at Thomson Reuters. She rescinded his offer, citing the massive economic event.

The sudden change of heart from the firm didn’t seem unusual for an inexperienced worker looking for an entry-level position. Maybe this was just part of the normal process, he thought.

“Looking back, I don’t think I was made as nervous by it as I probably should have been,” he said. “I had no real understanding of what the norm or status quo was.”

Convicer’s reaction was not unlike those of many in America. The failure of an investment giant seemed so distant to teachers and firefighters and nurses. Even Convicer, who was entering the finance industry, did not fully grasp how damaging it was. After all, how was Lehman’s bankruptcy supposed to tank the whole economy?

But as many soon realized, the economy was deeply dependent on a financial system that kept the blood flowing through cash for loan — the failure of Lehman sent shockwaves through the world. Businesses relied heavily on credit to grow, and households had bought homes using mortgages readily offered by the banks. So when the housing bubble burst — and the bond bubble followed — years of risky and highly-leveraged investments backed by shady subprime mortgages had finally caught up to Wall Street. What happened next was mayhem.

Stocks tumbled, investors pulled their money and the rest of America watched in wonder as Wall Street broke out in chaos. Gross domestic product, a measure of the country’s economic output, fell a startling 8.4 percent in the months after the Lehman bankruptcy. The economy lost about an average of 170,000 jobs a month in the beginning of the year. In the last two, it lost more than 700,000. By 2010, the nation had lost 8.7 million jobs.

Convicer remembers seeing less and less employers at job fairs and less position advertisements from Northwestern’s career office. He didn’t know it at the time, but the big financial crisis was hurling his way. 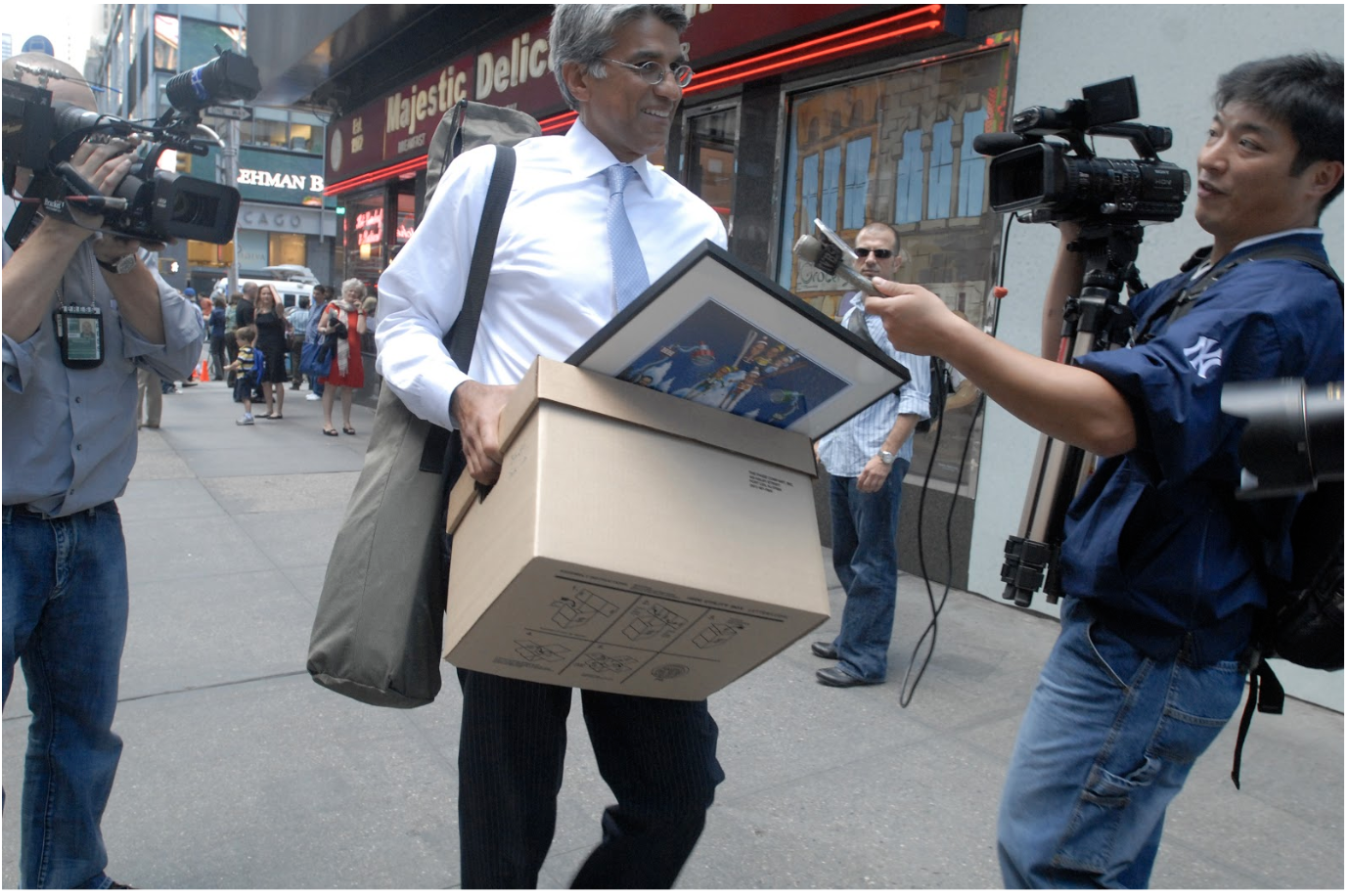 (Richard B. Levine/Sipa USA/TNS) An employee of Lehman Brothers Holdings Inc. carries a box out of the Lehman Brothers Global headquarters in New York on Monday, Sept. 15, 2008.

Students with a college degree faced better economic conditions than those without. But as businesses cut back on hiring, students began to fear the job market might be tougher than they realized.

“Coming into winter quarter of my senior year, I started to get very nervous about employment and what the future was going to look like,” said Sharon Friedenbach Morris (SESP ’10). “I’m sure part of that was knowing that the economy was really rough and that, in general, young people were having difficulties finding appropriate entry level work.”

As options became sparse, students expanded their searches — giving second thought to positions they hadn’t considered before or sometimes, entirely new industries. During the recession, for example, applications to law and graduate schools soared as students sought to shield themselves from a tumultuous job market.

After having a difficult time finding a job, Sean Ages (Weinberg ’09) traveled to Hong Kong to teach English. He had applied for jobs as a paralegal and in technical support; the only other offer he received was at a company in Ann Arbor, Michigan.

“I was just not really feeling that,” Ages said. “It was helped by the fact that there were no jobs in the U.S.”

“It didn’t really dawn on me that the reason I was having so much job search trouble was due to this massive recession,” he added. “That didn’t come until years later.”

It can often take longer for students graduating during a recession to find a job they’re happy with, said Mark Presnell, the executive director of Northwestern Career Advancement and a decades-long year veteran of student career services. While he was at Johns Hopkins in 2008, Presnell said he depended more on alumni networks and additional partnerships with employers who were hiring less.

Presnell recalls several students approaching him with rescinded offers from Lehman. They were ultimately able to find jobs in the industry, he said, but with added difficulty.

Still, students who were able to enter their primary industry may still have suffered. Research suggests those who graduate during a recession earn far less than their those who don’t — a setback that can follow them for life.

“Everybody started lower, they had to wait for a job, and then subsequent wage raises build on that,” economics Prof. Mark Witte said “There was some catch-up, but there’s evidence that it lasts forever.”

Convicer took a job at State Street, an investment management firm, with a salary just over $30,000 — more than $40,000 less than what he was supposed to make with Thomson Reuters. He was able to recover from the wage setback later after his next employer didn’t ask for his previous salary, but he never became the financial analyst he wanted to be, even after years of trying to while working for State Street and JP Morgan Chase. Firms were looking for recent graduates, and he was unwilling to take a pay cut.

But Convicer’s current position as a management consultant at an investment services company doesn’t upset him.

“In fairness, I’m probably happy that I ended up where I am,” he said.

If the American economy took a fastball to the head, then the average Wildcat took more of a slow curveball to the arm.

But recent NU graduates entered the same cataclysmic economy as everyone else. Students going into the finance industry were likely hit the hardest, Berger said, and firms across the board hired less — or stopped altogether.

“It was a moment of anxiety not knowing if the jobs, that I and other interns I worked with that summer, had been offered were going to stay,” said Maxwell Hayman (Weinberg ’09), who hopped from the Boston Consulting Group to Facebook to an enterprise software company he founded.

Presnell, the career services director, said he saw plenty of students looking for jobs in the spring of their senior year, when most financial firms finish hiring in the fall.

Of course, many students were not impacted at all by the economic disaster.

“One of the fortunate pieces of computer engineering is that the recession hit, but it didn’t hit that hard,” said Harrison Gordon, (McCormick ’10) who began at Microsoft and now works at a healthcare technology startup. “There were still a lot of demand for engineering jobs. While I knew there was a recession, I felt fairly insulated from it while at Northwestern.”

Though while well-paying jobs for NU alumni may not have been as hard to track down, career paths still took unexpected turns.

“Is it what I would be doing now if the economy hadn’t crashed?” Convicer asked. “Probably not.”

Fiddling while the economy downturns

For the rest of the nation, the recovery has been long, unequal and slow. Many fear the next economic downturn gets only more likely as the days go by.

And even with preparation, the legacy of the Great Recession will likely haunt students for decades.

“People talk about there being new and large housing bubbles again, or other similar bubbles in the auto industry,” said SESP junior Jack Benjamin. “I’m not an expert by any means, but those are the types of things that make you a little nervous.”

Presnell said his job will be the same as before during the next downturn: counseling students on education and career paths, connecting students with employers and preparing students for their job hunts.

“As somebody who coordinates career services at Northwestern, you always have to be prepared for the next recession,” he said. “You always have to be thinking about building as broad a base of employers as you can, building as broad a base of connections with alums as you can. So that when something does happen, you’re there to support your students and you’re there to know support the entire Northwestern community.”