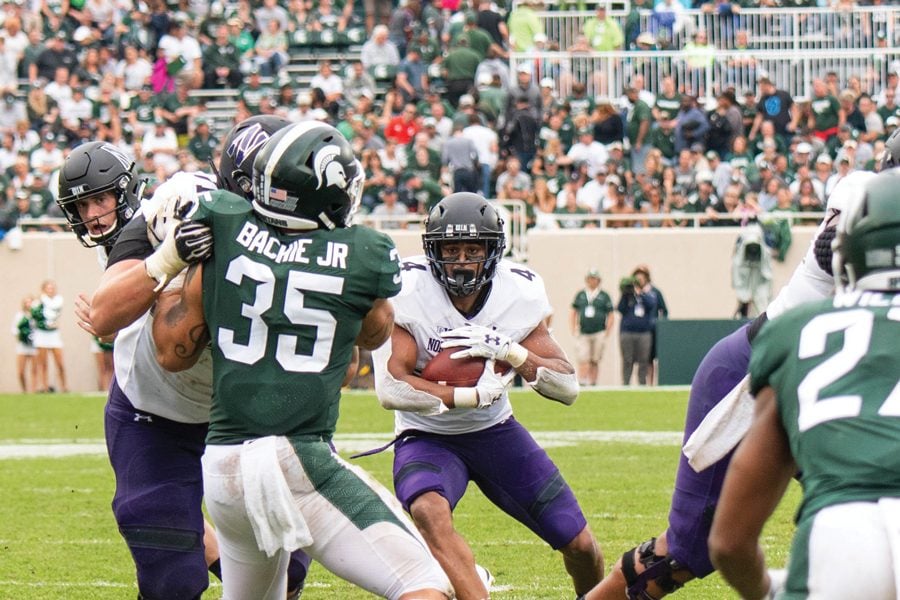 Solomon Vault looks for a hole in the Michigan State defense. Vault has overcome multiple injuries to become the Cats’ lead running back.

After an impressive start to the season, Jeremy Larkin had to retire because of cervical stenosis. So coach Pat Fitzgerald turned to a familiar face — Solomon Vault, who was originally recruited as a running back but was then converted to a receiver.

“They just said we need some more players in that room, need some more depth,” Vault said. “And they were giving me an opportunity to compete for the starting spot. So I took it, knowing that’s what the team needed in the moment, and here we are.”

After playing his first three seasons in Evanston as a receiver and kick returner, Vault was forced to miss the entire 2017 season. After sustaining another injury in training camp, Vault missed the first three games of the 2018 season. Then, out of nowhere, he saw a significant role against Michigan, tallying seven carries for 18 yards.

NU’s running game has struggled since Larkin — who amassed 346 yards and five touchdowns in three games — was forced to retire. Against the Wolverines, the Cats rushed for just 28 yards. Then a week later at Michigan State, NU finished with a measly eight yards on the ground, albeit against the No. 1 rush defense in the country.

Running backs coach Lou Ayeni said he feels the Cats are very close to getting their running game going.

“I just think we’re really close to kind of getting this thing on track, and we’re finding the right mixes, the right personnel groupings, so we’re there,” he said. “We’ve just got to keep working hard in practice, we’ve got to keep fine-tuning the little things in the game plan and we’ll be fine.”

Fitzgerald said NU would go with a running back by committee until someone breaks out. But it’s not clear exactly who the committee will consist of.

Junior John Moten sat atop the depth chart immediately after Larkin’s retirement, but he soon lost the top spot to Vault and didn’t get a carry on Saturday. Freshman Isaiah Bowser saw some time against Michigan, and freshman Drake Anderson — the son of legendary NU running back Damien Anderson — made his debut on Saturday, tallying 12 yards on five carries. Ayeni said both Moten and Vault will play “a lot” in the coming weeks.

As NU heads into a matchup with winless Nebraska, Fitzgerald was candid about the state of the Cats’ running attack.

“We’ve got some young backs that didn’t tempo their run well enough, they didn’t use their blocks well enough, so we’re a little bit station to station right now running the football,” he said. “It’s painfully obvious. I’m not giving away any trade secrets, we kind of suck at it.”

It’s a problem NU isn’t used to. For the first time in years, the Cats lack a permanent solution at running back. NU’s all-time leading rusher, Justin Jackson, rushed for at least 1,000 yards from 2014 to 2017. Larkin was tabbed as his long-term successor and looked the part to start the 2018 season.

But Vault knows he just has to focus on what he can bring to the table.

“The only thing I can do is be the best me I can be. Obviously those are some big shoes to fill,” he said. “I’m just trying to come out every day, work hard, try to get better, keep on learning and try to put on the best display I can on Saturday.”