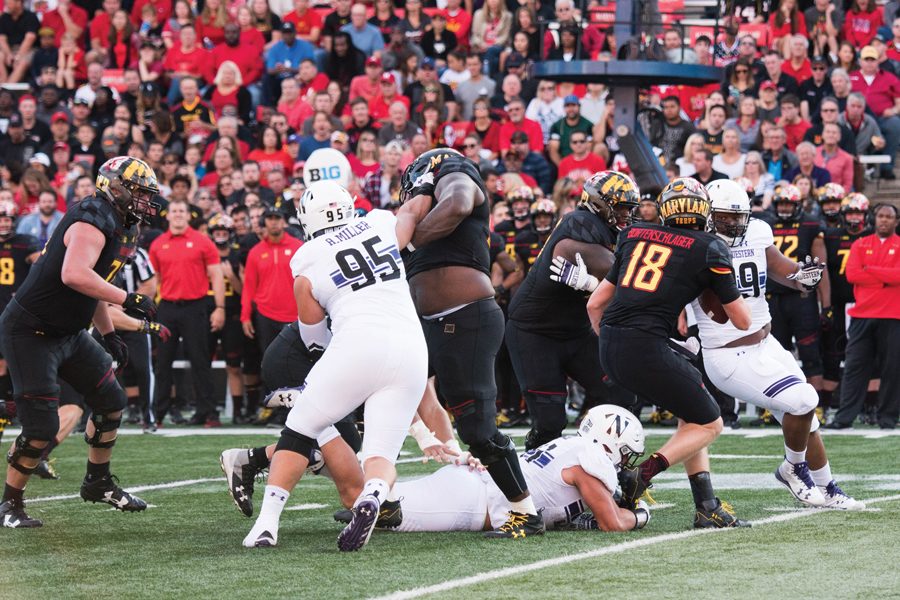 Alex Miller (No. 95) takes on a lineman while Sam Miller (on the ground) reaches for the feet of Maryland quarterback Max Bortenschlager during a game last October. The Miller brothers are both key members of Northwestern’s current defensive line.

Alex Hornibrook lay stomach-down on the field, Joe Gaziano emphatically fist-punched toward the bench and yet Samdup Miller, mere seconds after his first career sack, only discreetly pointed toward the sky.

For a while, the then-true freshman wasn’t sure if he’d have the mental fortitude to play at all that afternoon. At that moment a week prior, on Sept. 23, 2017, Sam and Alex Miller — both linemen on Northwestern’s stalwart defensive front — had been rushing not toward an opposing quarterback but rather to a hospital in Houston, unsure if their younger brother, Ben, would live another day.

But Sam ultimately did play that Saturday in Madison, and did earn his first sack out of 5.5 on the season (en route to earning national Freshman All-American honors), and he and Alex have since rode on an uplifting journey of remarkable family triumph.

The two brothers — Sam, now a sophomore end, and Alex, a junior tackle — say they aren’t telepathic, but they do have an uncanny habit of finishing each other’s sentences. It’s through that back-and-forth that they tell any story.

“That was the bye week right before Wisconsin,” Sam says.

“It happened Friday night, and we were texting our parents throughout (Ben’s high school) game wondering, ‘Oh, how’d they do?’ and we’re not getting any response,” Alex fills in. “We get the call the next morning, probably around 8 or 9, and our dad tells us, ‘There was an accident and Ben got hurt really bad.’”

“They flew us down there like immediately,” Sam adds.

Their youngest brother had torn his carotid artery, filling his brain with blood clots, and had a 50-50 chance of survival throughout the night. He was safe by the time Sam and Alex arrived, but unable to walk and without feeling on his right side. The recovery would be long, slow and painful, and the cause of the injury made Sam and Alex question their own collegiate paths.

“I didn’t practice that Tuesday,” Sam says. “I needed some time to get ready to play, because he got hurt playing football, so it was a mental hurdle to get over for a second to be able to play again. … I just wasn’t in the right frame of mind, and then all of a sudden it was…”

“…Wisconsin, and we had to get it together,” Alex finishes.

And get it together they did.

Sam brought down Hornibrook for his first career sack early in the second quarter, beginning of a streak of three straight games with a sack. He finished the season with 32 tackles and ranked fifth on the Wildcats with 8.5 for loss as well as second with four quarterback hurries.

Alex recorded two tackles that day in his own right and finished the season with 22 tackles (including 4.5 for loss and two sacks), helping cement his status as one of then-senior Tyler Lancaster’s primary successors.

In the 2018 season opener at Purdue, the two Millers started right next to each other for the first time since coming to NU. Though Alex then missed the next two games with an ankle injury that continues to hinder him, and Sam said he’s disappointed that he has yet to record a sack, they have both contributed significantly to a defensive line that ranks 14th against the run and 24th in havoc rate this fall, per S&P+.

“We say it’s a bunch of brothers, and those guys being actual brothers helps the chemistry start to light,” said defensive line coach Marty Long, who called Sam the more athletic and Alex the more physical of the two. “They’re on the field side-by-side, communicating different stunts and everything like that together. They can basically look at each other and know.”

There is a happy ending to the Miller family story, not only in Evanston but in Houston, too. One month after the accident, Ben Miller was at Ryan Field to watch his older brothers help the Cats upset Michigan State in triple overtime. Today, he has improved so much that it’s barely noticeable that anything was ever wrong, Alex said.

And as a result of it all, Sam and Alex have developed a new perspective on the sport they play and on life in general.

“Through our younger brother’s maturity, we really learned a lot, because he’s been super mature about it,” Sam says. “It’s amazing to see his attitude. Because I think I would be lost.”

“Growing up in Texas, football is number one. I’ve learned that there’s more, I feel like, to life than football,” Alex chimes in. “And there’s bigger things, like family.”