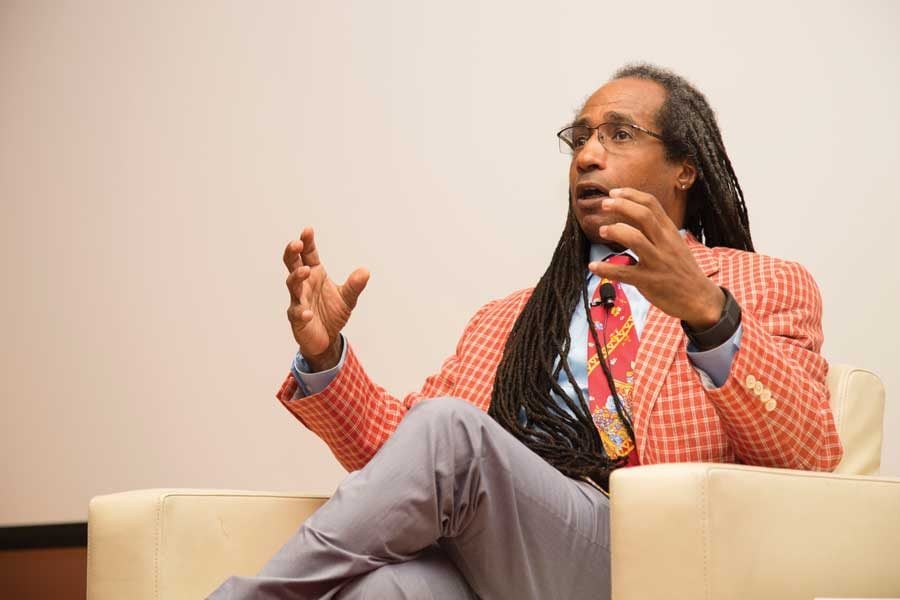 Northwestern University in Qatar professor Marco Williams. Williams was recently elected to the Academy of Motion Picture Arts and Sciences, the governing body that selects the winners of the Oscars.

Marco Williams expected to open a rejection email from the Academy of Motion Picture Arts and Sciences. Instead, he saw a still of Barbara Streisand and a caption reading “Hello, darling!” Further down, the email featured a decorative, interactive envelope resembling those read that at the Oscars. After clicking the invitation, it opened to a letter that read, “Welcome, you’re invited to the Academy.”

“They use films to welcome you into the film club,” he said. “It was a nice affirmation of being a member of this club which I’ve been a member of for 30 years, even if the Academy hasn’t recognized it.”

Williams, a NU-Q prof., was recently been elected to the Academy of Motion Picture Arts and Sciences, the governing body that awards the Academy Awards, more commonly known as the Oscars. As a member of the documentary branch of the Academy, Williams resides among the judges who watch and whittle down eligible documentaries into a list of nominated shorts and features. Williams also votes for the winners of the categories of documentary (feature), documentary (short subject), animated feature film, foreign language film and best picture.

Williams earned the position after he was nominated by two current members of the documentary branch of the Academy.

A highly-decorated documentary filmmaker, Williams has 30 years of experience in the industry. His films have been shown at numerous festivals including the Sundance Film Festival, the Miami International Film Festival and the Pan African Film Festival, among others. Most recently, Williams’ film on PBS’ “Tell Them We Are Rising: The Story of Historically Black Colleges and Universities” (2017) was screened nationally as part of Black History Month.

Dohrn said Williams was far overdue for a nomination considering his lifetime body of work.
Williams, whose documentaries largely center on themes of injustice, said his experience in America informs his worldview—and in turn, his work at the Academy.

“If I were on committees that involved conversations about the construct of America, or who’s in the Academy or what kinds of films were being considered, I would bring my perspective as an African-American man in America,” he said. “My work is an extension of who I am and how I will communicate is based on my experience. That’s why I’ve made the types of films that I’ve made.”

However, Williams said first and foremost, he is a moviegoer who appreciates the art of filmmaking.

Kyle Henry, the interim director of the MFA in documentary media program, said he first became aware of Williams and his work from the film “Two Towns of Jasper” (2002), in which two film crews traveled to the town of Jasper, Texas, where a black man was subjected to a horrifying modern-day lynching. One crew was white, and the other black.

Henry praised the way in which the two directors came up with this strategy to examine the story from all angles.

“The kind of strategy that they came up with to quickly build chemistry and get to the truth of what had occurred was incredibly innovative,” he said. “I’ve always been fascinated by his willingness to find new ways to build empathy and to get to the truth through documentary media.”

Most importantly, Williams is an invaluable perspective to have on the Academy because of his influential work, Henry said. The documentaries he makes, Henry said, tell stories that wouldn’t otherwise be told, but need to be heard.

“He’s an important figure because he unearths these underrepresented communities,” he said. “The kinds of stories he tells are the kinds that need to be brought to light.”