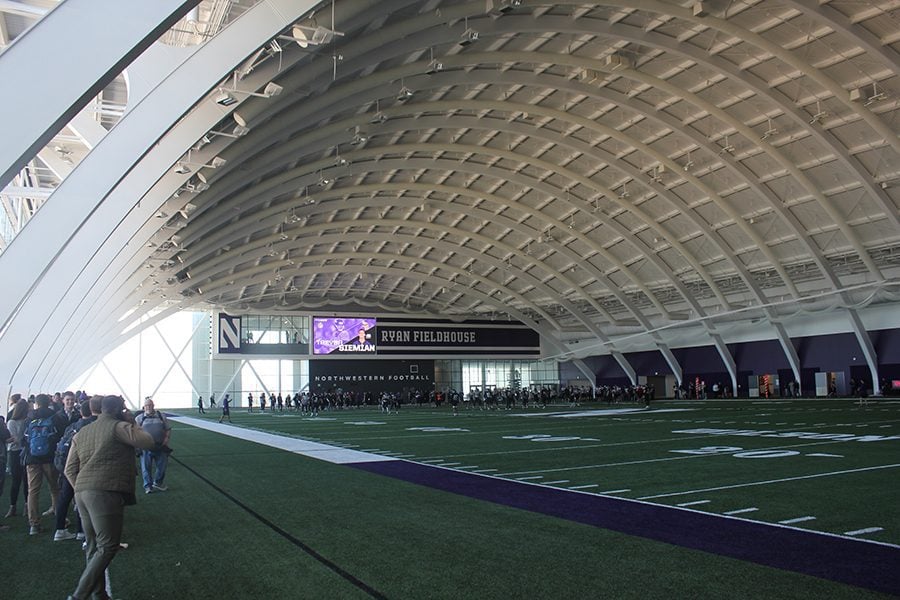 The Northwestern football team practices in the new Ryan Fieldhouse this past April. The Wildcats have started the season with a 2-3 record.

If you believe Northwestern was inherently and automatically misguided when deciding to spent $380 million on new athletic facilities — $270 million to build the Ryan Fieldhouse and Walter Athletics Center, and $110 million to renovate Welsh-Ryan Arena — then this column isn’t for you.

No matter the fact that the reality of private donorship dictates that the donors, not exactly the University and most certainly not the student body, decide what projects they will contribute money toward. If you are opposed to all substantial investment in athletic facilities — and there is a definite argument to be made for that case — then feel free to pass judgement at this very minute on the worthiness of the Fieldhouse and the Welsh-Ryan renovations.

But if you fall in the range of “I support” to “I’m uncertain about” the usage of that $380 million, but feel that the Wildcats’ rough start to the 2018 football season — 2-3 overall and 0-3 at home — proves building the Fieldhouse was a mistake, I urge you to wait a few years before making up your mind.

Regardless of all the talk about the advantages that a massive indoor practice field, a newfangled weightlifting gym and closer connectivity to the rest of campus will provide the football team, the truth is that the Fieldhouse is almost entirely about recruiting.

A few hours spent in this brand-new, high-tech Lake Michigan pantheon will not magically elevate the talent, fitness and work ethic of the players on this current NU team. It won’t magically improve future players either — but it will attract more talented, athletic players.

The Cats have historically ranked closer to the bottom than the top of the Big Ten in average recruiting ranking, despite producing on-field results of a significantly higher caliber. That’s partially because of high academic eligibility restrictions, but not entirely — Stanford’s annual recruiting class, for example, ranked in 247Sports’ top 25 every year between 2014 and 2017, while NU never ranked higher than 47th.

However, that’s starting to change. Hunter Johnson, a former five-star quarterback commit to Clemson, transferred to Evanston in June, which happened to be right as the Fieldhouse was being completed. And NU’s 2019 football recruiting class, while incomplete, currently ranks 48th in the country — on track to be its best class since 2014.

The effect of a new-and-improved facility is already having even more of an impact on men’s basketball recruiting.

The team just landed the highest-rated recruit in program history last week in four-star forward Robbie Beran (who, in turn, committed just one day after another sought-after recruit, center Jared Jones). I don’t know how much of an impact getting to play in a sparkling new Welsh-Ryan had on their respective decisions, but I’d guess it was a significant one.

This coming winter is likely to be another down season for men’s basketball, which must rebuild after graduating both starting guards from a year ago. If things go poorly, student interest will wane and the investment in the renovated arena will surely be ridiculed, just as the Fieldhouse has been due to the football team’s rough start to the fall.

Yet the two new facilities were never going to have an immediate impact on the Cats’ perennially unpredictable and often mediocre teams, and any expectation that such short-term failures portend their pointlessness is simply incorrect. Even if football goes 4-8 and men’s basketball goes 12-19 or the like, there’s no reason to consider that $380 million wasted.

It may also be that it was well worth it.

Just please wait until recruits have had time to take in the architectural splendor, chosen NU as a result, worked their way up into starting roles and taken over the reins on the Cats’ athletic fate before coming to a conclusion one way or another.