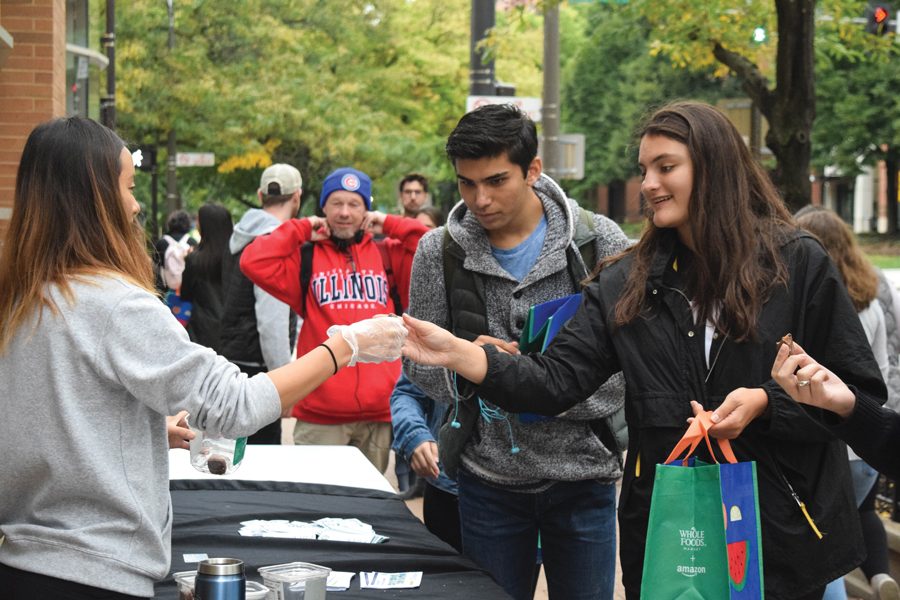 Although it may have gone unnoticed by some, Sunday was the best day of the year.

A day when Northwestern came together to celebrate something so wholesome that cars didn’t even seem to mind the hordes of college students blindly jaywalking all around Evanston.

I’m not talking about Dillo Day — you could describe that day in a lot of words, but wholesome probably wouldn’t be one of them.

I’m talking about Big Bite Night, the most “neutral good” day of the year. If you missed it, Big Bite Night really occurs in the afternoon, for two glorious hours one Sunday a year. Dozens of local businesses — 33 this year — set up tables and … give away free food. That’s it. No strings attached. And restaurants don’t just give out their leftovers or worst-selling items, either.

I was pumped as ever for Big Bite Night this year, and even started to get a “BIG BITE NIGHT” chant going while waiting in the check-in line outside Whole Foods. No one else joined in — I guess I wasn’t saying it loud enough?

While my fellow transplant Evanstonians may not have matched my enthusiasm for the event, I still had a good time. At Todoroki, I indulged on fried rice, a dumpling, a spring roll and two different pieces of sushi. I followed that up with a sampling of a pretzel with beer cheese from World of Beer, a cookie from Potbelly and fries from Edzo’s. I may have also snagged a Banh Mi sandwich from Viet Nom Nom and I recall a certain chicken rice bowl from Naf Naf Grill making its way into my hand. My memories are hazy because I spent most of my hour at Big Bite Night talking — and sometimes shouting — about how much I loved it.

I’ve been four years in a row, although I am fully aware the point of Big Bite Night is for new students to try out different Evanston restaurants. I just love it so much.

Big Bite Night is great — possibly the best — but don’t let one day of the year be the end of your exploration of Evanston. The city is filled with businesses who want to serve their community, Northwestern students included. Also on Sunday afternoon, D&D Finer Food’s, the anchor of Noyes Street, celebrated 45 years in business with an Oktober Feast, featuring an ambiguously large pumpkin, food and t-shirt giveaways and alcohol tasting. The store’s owners even donated $500 to the YWCA to mark the occasion.

So, especially if you’re a first-year student, don’t hesitate to bike, walk or even take the El (the Purple Line doesn’t exist solely to transport you to Howard!) to other places in Evanston. Norbucks is great, but another coffee shop in a different part of town may give you the space and distance from other NU students (we’re a lot) to really get some studying done.

There are WildCard deals all over, so seek some out and savor all Evanston has to offer — there are many more bites to be had.

Nora Shelly is a Medill senior. She can be contacted at [email protected] If you would like to respond publicly to this op-ed, send a Letter to the Editor to [email protected] The views expressed in this piece do not necessarily reflect the views of all staff members of The Daily Northwestern.