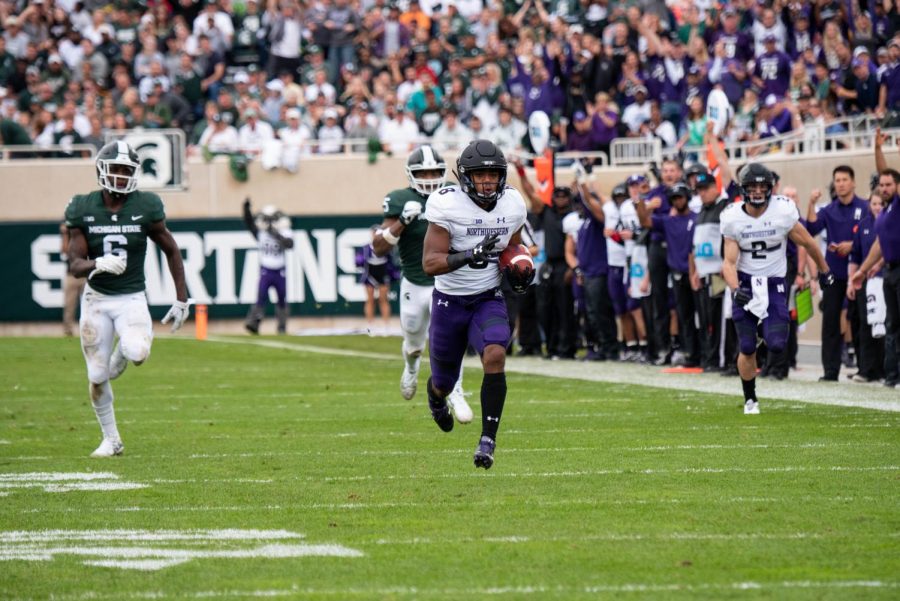 Kyric McGowan sprints toward the end zone. McGowan and the Wildcats snapped their losing streak with a win at Michigan State on Saturday.

EAST LANSING, Mich. — Northwestern put together its most complete performance of the season Saturday at Spartan Stadium, downing No. 20 Michigan State 29-19 as double-digit underdogs.

Senior quarterback Clayton Thorson was the star of the day, completing 66 percent of his passes for 373 yards and three touchdowns, and running for another on a quarterback sneak. With an offense that struggled to run the ball all day, the Wildcats (2-3, 2-1 Big Ten) took to the air 47 times and Thorson made the crucial throws to pull out the win.

Starting with a 77-yard touchdown pass to wide-open sophomore receiver Kyric McGowan and continuing with perfect touchdown throws to JJ Jefferson and Cameron Green, while peppering the Spartans (3-2, 1-1) with a series of impressively accurate mid-distance throws, Thorson picked apart the Michigan State secondary.

The NU defense stood strong throughout the game as well, only allowing touchdowns on a jet sweep to star receiver Felton Davis and on two short-field opportunities after Thorson interceptions.

Sophomore linebacker Blake Gallagher led the way with nine tackles, senior safety Jared McGee intercepted a questionable pass from Michigan State quarterback Brian Lewerke and the Spartans tallied only 96 rushing yards on the day, 48 of them coming on Davis’s touchdown.

1. Clayton Thorson played his best game of the year. Thorson hasn’t been the most consistent quarterback in the NFL Draft class of 2019, but the senior signal-caller showed off his ability to make all the throws against the Spartans. Without a viable running game, Thorson threw darts all over the field. With perfectly placed touchdown passes to Jefferson and Green, the deep ball to McGowan and a variety of pinpoint out routes, Thorson showed plenty of the tools that have some projecting him as a high draft pick.

2. You don’t need to run to win. It was not the best matchup for an NU run game still clearly missing Jeremy Larkin. Michigan State had allowed the fewest rushing yards per game in the country entering Saturday, and that likely won’t change after Cats’ nine-yard total. Junior running back John Moten was rarely seen, senior Solomon Vault averaged less than one yard per carry and Anderson’s 11-yard gain at the beginning of the third quarter was the NU’s longest gain of the day.

3. Northwestern is better than you think. Yes, the Wildcats sit at 2-3 on the year, but all three losses have come by very close margins that turned on three or four plays. NU was thoroughly outplayed by Michigan, but otherwise has been competitive in every game and just took down at top-20 team on the road. If the Cats executed better on just a couple plays against Duke and hadn’t allowed three defensive touchdowns to Akron, they could easily be 4-1.