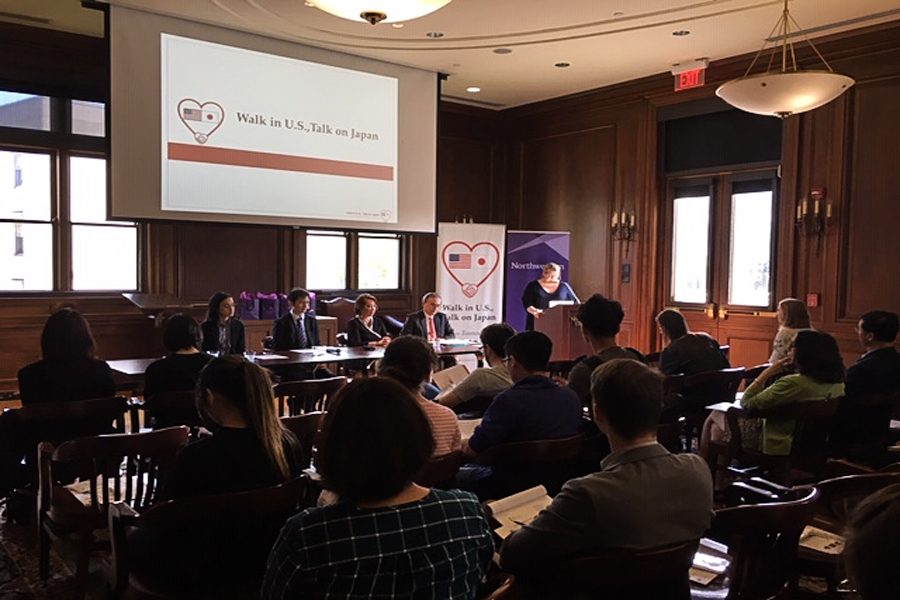 Shotaro Oshima during the ‘Walk in US, Talk on Japan’ event in Harris Hall. He was the former Economic Minister of the Japanese Embassy in the U.S.

Ambassador Shotaro Oshima of Japan spoke about the importance of his country’s alliance with the United States at a Wednesday event.

The event comes at a time of a critical global trade situation. Over the seven-decade partnership, Japan and the U.S. have come to account for nearly 30 percent of global GDP, Oshima said. U.S. exports have relied heavily on Japanese investment in recent years.

The two countries’ relationship is also relevant in the context of the ongoing U.S.-China trade war. Yet Oshima pushed back on even calling it a trade war.

“That would imply that there are two sides and global trade is far more complicated than that,” Oshima told The Daily.

Oshima said he hopes the countries follow through with the World Trade Organization’s conventions and rules as that would be the only way to ensure fair and free trade practices.

“The issue is not just men — many women serve tea ceremoniously, take instructions from men and don’t speak up for themselves,” she said. “Women are an underutilized resource.”

However, under Japanese Prime Minister Shinzo Abe’s policies, this trend is seeing a shift. With an aging population and low fertility rates, the Japanese economy has faced a severe decline on account of an inadequate workforce. Abe’s women-centered policies and support structures have been aimed at increasing the participation of women in the economy.

Takahashi said Japanese women can help counter the economic shrink the country currently faces. Along with that, Oshima said Japan is welcoming foreign workers and making urban cities more friendly toward them.

The event also covered other cultural topics such as the significance of the kimono and the supportive citizens and society of Japan.

Weinberg junior Max Sigal said he didn’t have any expectations going into the talk, but learned from Oshima.

“A lot of the things that I have heard about Japan… are definitely changing for the better especially from hearing about them from the first person point of view,” he said. “The women in industry, how they treat them, was something I had already known but it’s definitely getting better.”