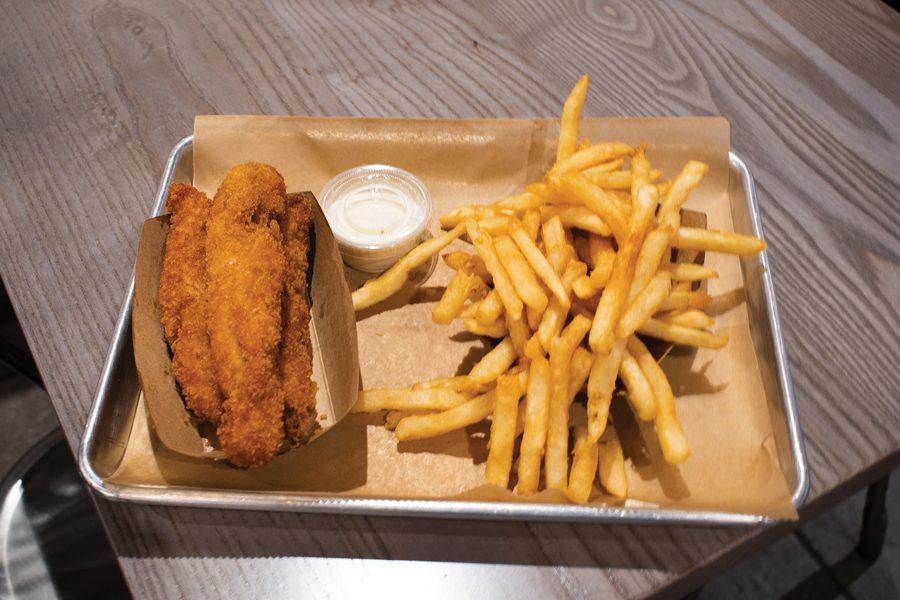 Panko tenders and fries with a side of ranch dressing. 10Q Chicken opened at 816 Church St. in late August.

Beware all Chicken Shack lovers: there might be a new king of chicken in town.

Together, the pair developed the 10Q menu over the past year.

“We really wanted to do something different and better than your typical fast, casual restaurant,” Yoo said.

Nestled between a bank and an investment firm, 10Q is located at 816 Church St., just a few blocks from campus. Yoo said he and Song also looked at potential locations in Hyde Park and Rogers Park for their restaurant, but they ultimately settled on the Evanston spot. Since Northwestern’s academic year began last week, Yoo said he’s noticed a lot of students coming in.

“They’re very busy. They’re doing great in the new market,” said Laura Brown, Downtown Evanston’s business development and marketing manager. “The times that I’ve passed by, they’ve had lines and people passing by in the cafe.”

The Church Street location formerly housed Five Guys, which closed in December 2016. The site had been vacant for nearly two years before it was filled by 10Q.

Almost everything the restaurant serves, including the homemade Garlic Parmesan Aioli, is made in-house with unique recipes, Yoo said. He added that 10Q’s staff puts a lot of effort into hand-crafting the sauces and seasonings since everything is “chef-driven.”

Yoo said the 10Q sandwich and the Kangnam Style wings are his two favorite dishes, noting that they are also the two most popular menu items.

The restaurant is a sleek, modern space, mostly black and white except for a big neon sign reading “10Q Chicken” that hangs on the main wall.

McCormick freshman Kavi O’Connor said he enjoyed the layout. He said 10Q is a great addition to downtown Evanston because it gives students a “high class” option for fast food, and added that the fries were “amazing.”

According to its website, the name 10Q plays on “thank you,” a simple phrase reflective of the restaurant’s ultimate goal: to serve and please its customers.

“Customer service and hospitality; giving customers what they want has always been central,” Yoo said.