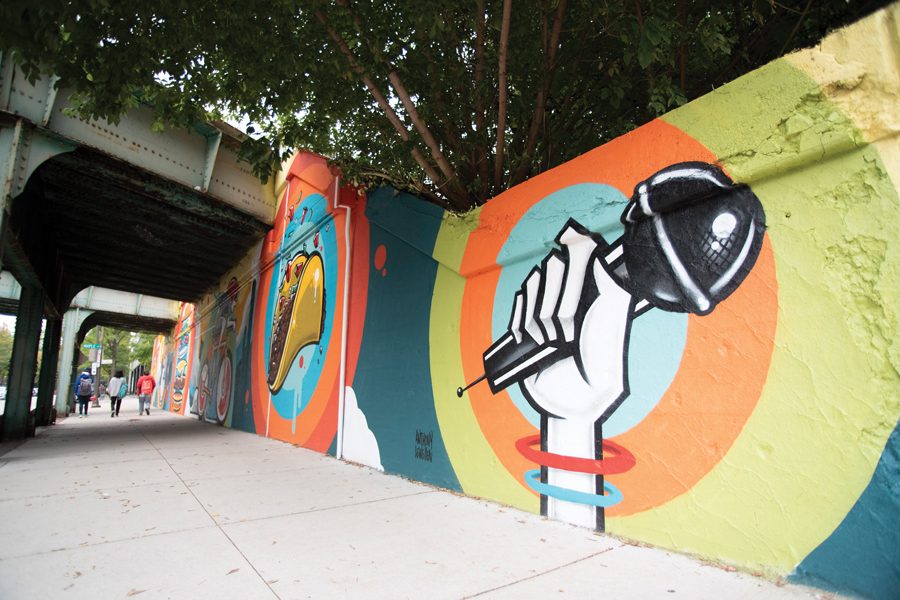 Residents passing through Evanston will be greeted with bright splashes of color to brighten their commutes, thanks to the addition of two new murals to a downtown underpass.

The murals, located on Church Street and Maple Street, were inspired and funded largely by surrounding local businesses.

One side of the mural — painted by Chicago-based artist Jeff Zimmerman — features several realistic-looking faces on a largely white abstract background. The other side — created by Anthony Lewellen — is a colorful mix of illustrations of a burger, a taco, a dumbbell and a microphone.

Lea Pinsky, the director of outreach and community programs at Art Encounter, a non-profit art education organization, said her group facilitated the painting of the mural.

Pinsky said the artists were given the theme “food and fitness,” a subject chosen by Downtown Evanston and some of the mural’s other local sponsors — which includes Evanston Rocks, Church Street Plaza and real estate company FD Stonewater.

“They wanted it to represent the fun business district of Evanston,” Pinsky said. “They didn’t want something abstract. They wanted characters and things that represented dining downtown.”

Lewellen, who painted one side of the mural, said he “playfully” interpreted the theme in his own aesthetic, drawing on bold colors and imagery. His end goal was to make something visually engaging and dynamic, he said.

Lewellen said working on his mural took about a month — two weeks of planning and design followed by two weeks painting onsite. As he worked on the mural, Lewellen said he noticed people’s expressions light up as they walked by.

“It was really positive feedback and people just telling me how much brighter and more pleasant it was walking through the space,” Lewellen said. “Those things are really nice and sort of the unexpected and unplanned benefit of being able to work in the public like that.”

Jennifer Lasik, Evanston’s cultural arts coordinator, said there’s been an “explosion” of public art in Evanston over the last two years, with more than a dozen new murals and half dozen sculptures springing up across town.

Lasik said there are many ways to propose a mural in Evanston. Sometimes community groups or aldermen suggest one, while other times an artist may have an idea for a certain area, she said. Typically, the group or individual would approach the Public Art Committee, which would then recommend the proposal to the larger Arts Council.

Lasik called Evanston a “great arts community” and said the murals are not only appreciated by residents, they also make an area safer and more cheerful.

“It’s not a secret that Evanston’s underpasses tend to look blighted,” she said. “Any time we can take artwork and we can brighten up an area (or) connect people emotionally to their community through art, all that is very positive.”

Pinsky said she loved the final result and thinks the murals are fun and dynamic. The artwork, she said, really captures the energy of downtown.

“I just think it gives people a pep in their step when they’re walking through their daily life,” she said. “To have a chance to see this huge scale art… It takes you out of your phone or out of your head and makes you think of aesthetics and color and shape — all the good things art can do in a community.”