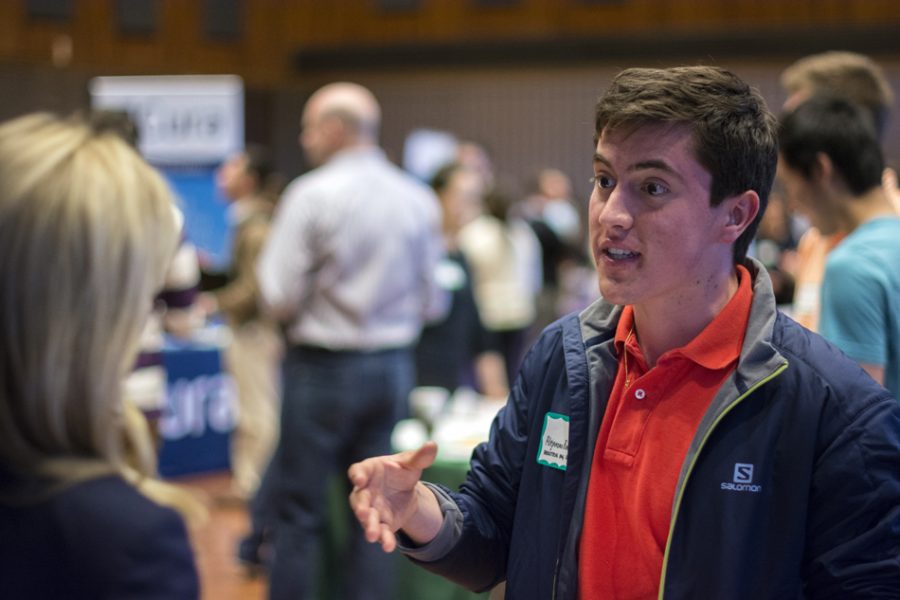 A recruiter talks at a 2014 career fair. Geni Harclerode, director of employer recruitment and engagement at NCA, said the career fair gives students the opportunity to meet with over 170 different employers over two days.

The career fair is set take place Tuesday and Wednesday in Norris University Center. According to NCA’s website, the event will give students the opportunity to find internships, network with potential employers and apply for jobs.

The Daily spoke to NCA staff, who offered tips to students hoping to make an impression with potential employers.

Geni Harclerode, director of employer recruitment and engagement at NCA, called networking “an opportunity for you to be able to connect with someone that you have shared interests with.”

“A big sort of outcome of the career fair is that it gives students the opportunity in a limited amount of time to be able to explore a lot of different avenues,” Harclerode said. “There are only very few other times in (students’) professional life where they will be able to walk into a room and for four hours meet 80-90 organizations in one day.”

Throughout two days of the career fair, students will have the opportunity to meet with over 170 different employers, Harclerode said. She advised students to prepare beforehand by viewing the potential employers on Handshake or downloading “The Fairs” app, which will give students’ information like an employer list and real-time updates.

Harclerode added, it’s important to not be overwhelmed by the sheer number of employers available to students.

“People want you to approach their tables,” she said. “The worst thing in the world for an employer is being at the career fair and not having someone to talk to. That’s why they came.”

Mark Presnell, the executive director of the NCA, said students can prepare a few key points of their resume to discuss with employers and research more on those they want to speak with.

Presnell said students should “attend, relax and articulate their goals and not to get too caught up in perfection and speeches.” He added that the fair can also be beneficial for employers through allowing them to meet with students and educate them on about their company and potential careers.

“The biggest mistake students make is thinking the career fair is only for certain types of employers. We continue to see many different employers from different industries participate in the event,” Presnell said. “I think that students are often attracted to the biggest consumer brands. There are many wonderful organizations that students may have never heard of, yet they provide excellent internships or entry-level opportunities.”

Harclerode said designing the fair to help students feel comfortable speaking with potential employers is a priority. Students can dress in business casual attire, she said, a change from the professional attire required years ago. Opportunities for students to take a picture for social media sites, LinkedIn or their resume will also be available, she added.

However, Harclerode said despite efforts to make networking less uncomfortable, many see networking as “schmoozy or artificial.” In reality, that’s a “myth,” she said — students network every day.

“If you have (students) thinking about, for example, joining a student organization or getting together with other students in their peer advising group, there’s lots of ways they have already accomplished the skills that are inherent in networking,” Harclerode said.