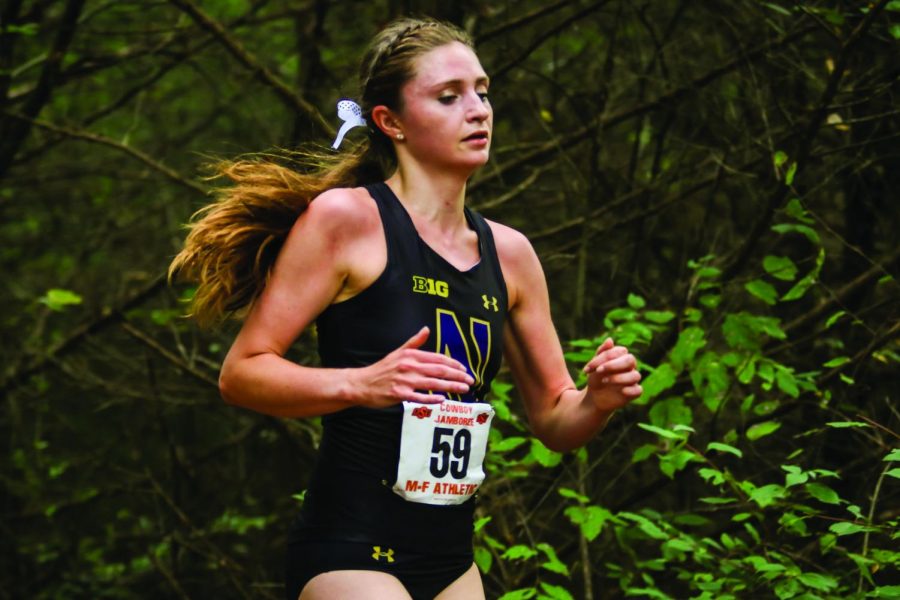 Sarah Nicholson runs. The junior finished in fifth at the Badger Classic.

Coming off a second-place finish at the Badger Classic in Madison, Wisconsin, on Sept. 14, Northwestern will be back in action Friday at the Notre Dame Invitational in South Bend, Indiana.

Thirty-seven schools will participate in the event, split into two divisions. The Wildcats, along with host Notre Dame and fellow Big Ten foe Iowa, will be in the Blue Division, the stronger of the two.

A pair of juniors has been carrying NU in the early going. Aubrey Roberts finished second at the Badger Classic, while Sarah Nicholson placed fifth. Junior Kelly O’Brien, freshman Sielle Kearney and senior Isabel Seidel also cracked the top 10 for the Cats, who second to host Wisconsin.

O’Brien and Kearney also finished first and second, respectively, at NU’s first meet of the year on August 31, as the Cats won a five-team race hosted by Eastern Illinois. Freshman Rachel McCardell took third as NU swept the medals.

The Cats traveled to Notre Dame during the fall season every year from 2011-2015, but this is their first trip to South Bend since then. NU will be competing alongside four ranked teams in South Bend in No. 11 BYU, No. 12 Furman, No. 21 California and No. 22 Notre Dame.

The top competition should help prepare the Cats for the Big Ten Championships in Lincoln, Nebraska, on Oct. 28. The Big Ten is home to six ranked teams, including two in the top 10.