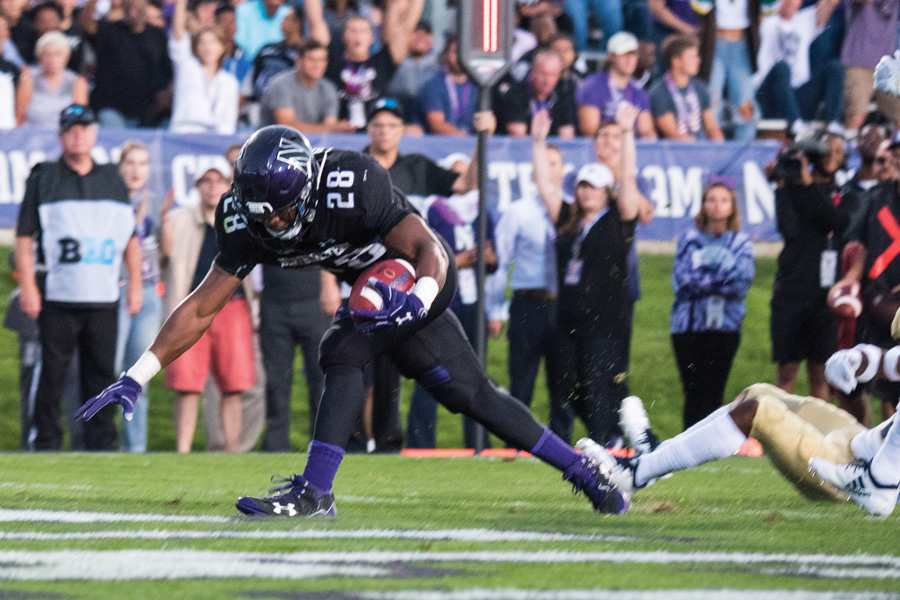 Jeremy Larkin seeks to evade a tackler in one of his final career games. (Daily file photo by David Lee)

Jeremy Larkin seeks to evade a tackler in one of his final career games.

Were Jeremy Larkin more soft with his speech, more reticent to chat, more close to the vest about how he was feeling, he might still be the forerunner of Northwestern’s ground game, a powerful offensive weapon as the Wildcats face a daunting home test against No. 14 Michigan.

More significantly, he might continue to subject himself to serious harm that could lead to a catastrophic spinal injury.

Instead, Larkin admitted to an athletic trainer that he didn’t feel the pain from a minor injury because of numbness, leading to a stunning two-week sequence that concluded with Larkin ending his career a week ago, after being diagnosed with cervical stenosis.

All of a sudden, Larkin learned that the numb sensations he often felt on the field were symptoms of a condition that could have intractably affected his everyday life. He went from an early-season standout on a struggling offense to an enthusiastic, most unusual student assistant coach. And NU’s rushing attack suddenly lost its clear-cut leader, its lone every-down back, its next superstar, leaving only a small cadre of rarely utilized wild cards.

“It’s just a shock — a shock to all of us, a shock to him, a shock to the program,” running backs coach Lou Ayeni said. “He has handled it as best as you could handle it. He’s out here helping us out, he’s a part of this program just as much as when he was on the field. Now he’s making his impact off the field.”

‘There’s no way this is possible’

Larkin never lost consciousness. He never felt nauseous. As a running back, he took hundreds of hits. The numbness must have stemmed from soreness, he figured.

He had dealt with the issue since high school, he said. It became routine for Larkin to check his hands for feeling after a play, then rely on muscle memory if he couldn’t. Plus, the numbness only affected him on the field, never during daily life.

“I thought we have to get it checked out, but you can’t medically (disqualify) me,” Larkin said. “There’s no way this is possible.”

As the days last week went by and Larkin saw more and more specialists, the gravity of the situation began to sink in. One specialist, who treated former Georgia linebacker Jarvis Jones, put Larkin’s case in stark terms, according to the running back: Jones had one symptom of cervical stenosis. Larkin had a dozen of them.

‘I get to have a normal life’

Larkin needs no surgeries, no treatment, no medications for his cervical stenosis. Only one thing must change in his life: no more football.

That’s a jarring change for a high-level player who has dedicated thousands of hours to the sport. But true to Larkin’s effervescent personality, according to teammates and coaches, he spun the devastating diagnosis into a positive — even more quickly than some peers.

“Hearing that he has to stop playing his lifelong favorite sport, his love, it was obviously devastating, but he has taken it great,” freshman running back Isaiah Bowser said. “I was sad. He seemed a lot happier than I did.”

Junior running back John Moten said the news was “hard to hear,” especially because Moten called his teammate the program’s hardest-working player. Ayeni, who was able to coach Larkin for just three games, not the three seasons he expected to when he came to Evanston this offseason, was “heartbroken.”

For Larkin, though, the situation was a matter of perspective. He can no longer play, but he could tell friends of his diagnosis from the couch or the edge of a football field, not from a hospital bed. He can get a head-start on a possible coaching career, even if it begins years sooner than he planned. He remains on pace to earn his degree in March 2020.

“It was definitely tough the first time hearing the news,” Larkin said. “At the end of the day, I got this news … (and) as I processed it, (I realized) how grateful I am for our medical staff and the people and family I have to support me, and the great walks of life I have.”

Those walks still involve football. Coach Pat Fitzgerald gave Larkin a whistle on Monday, a first step to Larkin making an impact off the field. He showed up at practice on Tuesday acting as if little had changed. And he carried a big smile, Ayeni said.

‘We have to keep pushing’

But the on-field dynamics have changed significantly for the Cats. No currently active running back has ever been NU’s leading rusher in a game. Moten, the most obvious starting replacement, ran for 55 yards a season ago. The 473 total yards Larkin accumulated in the Cats’ first three games isn’t far from the 573 that every other NU back has accumulated in their careers combined.

Now, it’s unclear who the best back on the team even is.

“We’re going to find out. … We’re going to play a bunch of guys and see who emerges,” Ayeni said. “The best thing we can do is find what skill sets these guys excel at and accentuate that and give them the best opportunity to be successful.”

That begins with Moten, who tallied a respectable 340 rushing yards and two touchdowns as Jackson’s primary backup in 2016. Two offseason injuries relegated him far down the depth chart, and he appeared to lose even third-string reps to Jesse Brown. (Brown, now a sophomore, has not yet played this season.)

The 6-foot, 209-pound Moten did assume backup duties to Larkin early this season and rushed for a touchdown against Purdue. Still, it remains to be seen if he can be effective as the lead back.

Moten, for his part, said he wants to prove that he has “some fight in me.” He earned scores of accolades in high school and rushed for 100-plus yards twice in 2016. The Cats will almost certainly need that kind of production to remain competitive.

Both Bowser — a well-rounded, power back — and Drake Anderson — a speedster best known as the son of NU great Damien Anderson — will likely see extensive action, and Ayeni expressed optimism at their ability to make impacts as the season progresses.

But carrying a 1-2 record into the bulk of a daunting Big Ten schedule, with an up-and-down offensive line and a quarterback whose three turnovers all ended in touchdowns in a stunning loss to Akron, the Cats need more than occasional flashes from their new backfield principals. They must find a way to replace the potent production of Larkin, who now observes from a much healthier, safer place: the sideline.

“His situation could be a lot worse than it is now,” Moten said. “As he walked us through it, he also explained to us that it’s an opportunity we can take advantage of, that we have nine more games left and we can’t let this be detrimental to this team. We have to keep pushing and keep rolling.”