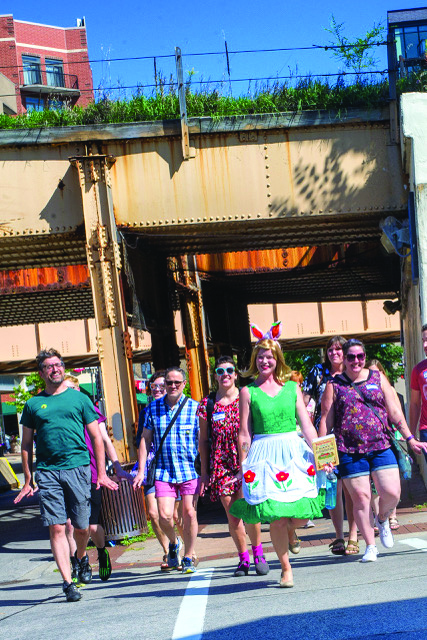 In Upended Production’s “Alice,” audience members go down the rabbit hole and experience Evanston’s Main-Dempster Mile as it transforms into Wonderland.

The show, which opened Sept. 22, lets audience members take on the role of Alice and follow a white rabbit who escorts them into stores and restaurants scattered along the Main-Dempster Mile. At each stop, they watch a performance — ranging from drag to spoken word to ballet — inspired by a chapter of Lewis Carroll’s “Alice’s Adventures in Wonderland.”

Noelle Krimm, who serves as the Chicago-based theater company’s artistic director, originally created and performed the show in 2004, when it was brought to life in Andersonville as a Neo-Futurists production. Ten years later, she is performing the show again after launching Upended Productions.

After speaking with Katherine Gotsick, the executive director of the Main-Dempster Mile, Krimm said the two realized Evanston could be the perfect fit for a reprisal. Gotsick said the show seemed like a “no-brainer” because it would bring people into stores and it aligned with Evanston’s interests.

“So many of our residents here are art lovers or artists themselves,” Gotsick said. “We want (Evanston) to be some place that is edgy and nimble and outside of the normal idea of economic development activity.”

Gotsick worked with local Evanston businesses — like Sketchbook Brewing Company, La Principal, Chicago-Main Newsstand and others — to provide venues for the production, while Krimm rounded up roughly 60 performers from Evanston and Chicagoland to be featured in the show.

Bilal Dardai, a contributing artist who has been involved in all three productions of “Alice,” leads chapter five in some of the shows, when Alice encounters a caterpillar. For his part of the show, Dardai delivers a live literature piece inspired by Carroll and the writings of journalist Hunter S. Thompson.

Dardai, who was formerly an ensemble member for the Neo-Futurists, a Chicago-based collective of writers, directors and performers, said much of his work is focused on audience interaction and perception. A show like “Alice,” he said, is exciting because the audiences are always different, which influences each performance.

“Something that absolutely delights one person is going to just be kind of boring to another,” Dardai said. “It allows you as a performer to change that around… and allows the artwork to feel interesting both to someone who’s experiencing it for the first time and somebody who’s been doing it for like 12 performances in a row.”

While Krimm originally created the show to address how theater is evolving into a more interactive medium, she also sees the production as a way to support local communities. In past performances of “Alice,” she watched new relationships form between businesses and artists and noticed how show attendees would often come back to the stores and restaurants.

Although “Alice” is based on a children’s tale, Krimm said her target audience is adults “who have forgotten that the world can be magical.”

“We’re in a time that feels oppressive and certainly if you’re keeping up with the news cycle, there’s a lot to be sad about,” Krimm said. “So there are little moments that reflect what’s happening now but then there’s also a hopeful message that there’s still magic and there’s still good and the world can still surprise you in a really good way.”