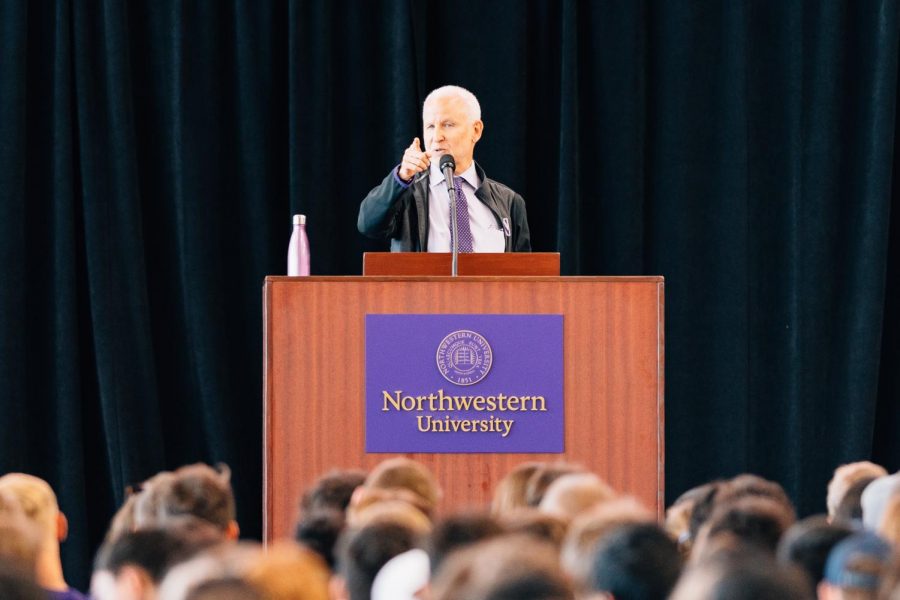 Top administrators welcomed new students to the Northwestern academic community Sunday at its annual president’s convocation, just one of a series of orientation events organized for Wildcat Welcome.

“You have a place to go where you know you can be comfortable and supported, and you don’t have to watch what you say or watch your back because you know people are going to love you,” he said. “That gives you the strength and that gives you the confidence to go out to the rest of the community and really stretch yourself outside the classroom.”

The speech comes two years after Schapiro entered the center of the national debate about safe spaces and free speech on college campuses. During the 2016 convocation, he said people who do not believe in trigger warnings are “lunatics,” and those who deny the existence of microaggressions are “idiots.”

He later walked back some of his comments, but stood behind his basic argument in various op-eds and interviews with several media outlets, including with The Daily Northwestern and the Wall Street Journal.

Last year, Schapiro delivered another heated speech in which he blasted Fox News and conservative commentators for what he called a misunderstanding of younger generations. This year’s speech was notably quieter, but he did briefly mention the conservative-leaning news network.

Schapiro also defended the University’s “AND is in our DNA” marketing campaign, which highlights students’ varied involvement but has come under criticism for what some say is an endorsement of overextension.

“Some people don’t really understand it. They think that what we’re trying to tell you as educators is that you should double major or triple major, you should do every certificate in mind,” he said. “That’s not what I had in mind when I was in the room when we came up with that tagline four years ago. What I had in mind was, if you’re in McCormick School of Engineering and Applied Science, and you’re doing engineering, you have the flexibility to take some courses in art history.”

Schapiro, a labor economist, said some of his favorite courses were ones outside his academic discipline, adding that a diverse coursework could make students more attractive to employers.

While speakers offered advice to new students and encouraged them to support one another, Provost Jonathan Holloway stayed true to his academic background when he discussed Thomas Jefferson’s controversial yet mixed legacy as a president, egalitarian and slaveholder.

Holloway went on for over seven minutes before revealing his true purpose for retelling the unveiling of Jefferson’s ancestry and history, which required the work of academics from various backgrounds.

“You will, in short, find yourself on a path where you will stumble upon messy intersections where fields like history, science and literature have met,” he said. “When you find yourself at a crossroads, take the time to inspect the seemingly empty spaces between fields, look for what is only revealed when a new perspective is introduced, dare to listen to beliefs that are not your own.”

Advice to students wavered from academic to more social: don’t only make friends with people like you, listen to yourself and each other, and challenge yourself to understand beliefs that may be in conflict with your own. At one point, after proudly noting the development of new buildings during his tenure as president, Schapiro encouraged students to participate in intramurals, adding that the new Ryan Fieldhouse would not be limited to just varsity and club athletes.

Patricia Telles-Irvin, the vice president for student affairs, asked students to seek out support systems and to offer that support for others. The statements come just over a week after Telles-Irvin highlighted mental health and wellness resources in an email sent to families of students.

That email came as current students have increasingly expressed concerns about the availability of mental health resources on campus.

During Sunday’s convocation, Schapiro announced an unspecified amount of additional funds to Counseling and Psychological Services, and Telles-Irvin encouraged students to listen for students who may be struggling.

“We’re here trying to create a community of care,” she said.