Football: Jeremy Larkin retires from football due to cervical stenosis 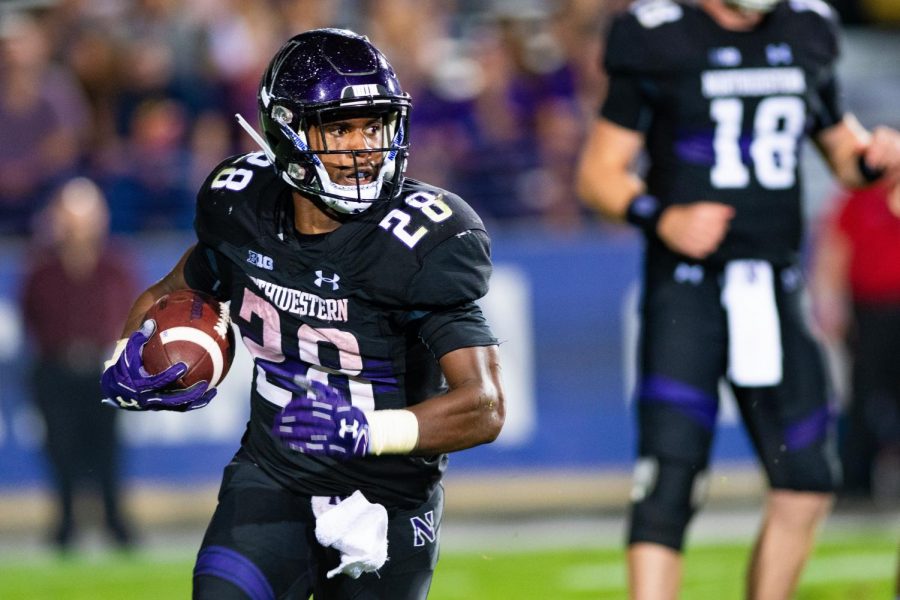 Jeremy Larkin carries the ball against Akron in what became his final career game. Larkin retired due to cervical stenosis.

Sophomore running back Jeremy Larkin, Northwestern’s leading rusher and a bright spot in this season’s sluggish start, was forced to retire Friday after being diagnosed with cervical stenosis.

The decision was announced Monday, roughly two weeks after Larkin first went to trainers to discuss occasional numbness. After being diagnosed with the neck condition, which affects the spinal canal, doctors “exhausted all options,” coach Pat Fitzgerald said at a news conference, but ultimately determined that Larkin could not continue playing.

“(It’s) a challenging day for Jeremy Larkin the football player, but a blessing for Jeremy Larkin the young man,” Fitzgerald added. “The most important thing is that our medical team, along with Jeremy, worked hand-in-hand. (They) did a terrific job in identifying an issue that hopefully avoided anything for down the road that could’ve been, quite frankly, catastrophic from an injury standpoint.”

Larkin first brought his concerns to the medical staff prior to the Sept. 15 game against Akron, but doctors did not complete their investigation before that contest, a team official said. After reaching the cervical stenosis diagnosis, they consulted several outside specialists before concluding that “the risks clearly outweighed the benefits,” the official said.

The condition, which can be hereditary and/or caused by repeated neck trauma, is uncommon and few football players are diagnosed with it, according to the official. Cervical stenosis is not life-threatening but could lead to severe spinal cord injuries with further impact.

“He told me today, ‘He’s really blessed that the doctors caught this,’” senior quarterback Clayton Thorson said Monday. “He was really thankful that they found it. He’s in a much better spot now for himself.”

Larkin led Northwestern’s rushing attack with aplomb through the first three games of the season, tallying 346 rushing yards and five touchdowns. He had comfortably stepped into the shoes of Justin Jackson, the program’s all-time leading rusher, after serving as the primary backup in his first season of play.

In 16 career games, Larkin tallied 1,091 yards from scrimmage and 10 touchdowns. He carried the ball 22 times for 82 yards and two touchdowns in his career finale against Akron.

Larkin will nevertheless remain involved with the program as a student assistant, a decision he and Fitzgerald reached after talking extensively since Friday, when Fitzgerald learned of the news.

“I’m ecstatic that he’s going to join the staff,” the coach said. “He was adamant with the team today that this was not the end, it’s just a new chapter. His attitude was awesome.”

Fitzgerald and Larkin’s teammates raved about the sophomore’s speech to the team early Monday, in which he formally announced his retirement. He received a standing ovation for his address, what Fitzgerald called “one of the most inspirational football speeches” he has heard from a player.

Some players, like sophomore linebacker Paddy Fisher — who said he was aware of the occasional numbness Larkin suffered —— knew the news ahead of Larkin’s remarks, while others did not. Still, all stressed that the ground game’s anchor wanted to look forward to his stint as a coach, not to feel pity for what he had to give up.

“It was a testament to his character the way he stood up and addressed us, and was able to give us a synopsis of what he’s going through but also his outlook on his life going forward,” junior defensive end Joe Gaziano said. “It’s not going to end, it’s just opening up a new chapter.”

This story was updated at 3:44 p.m. with additional information.