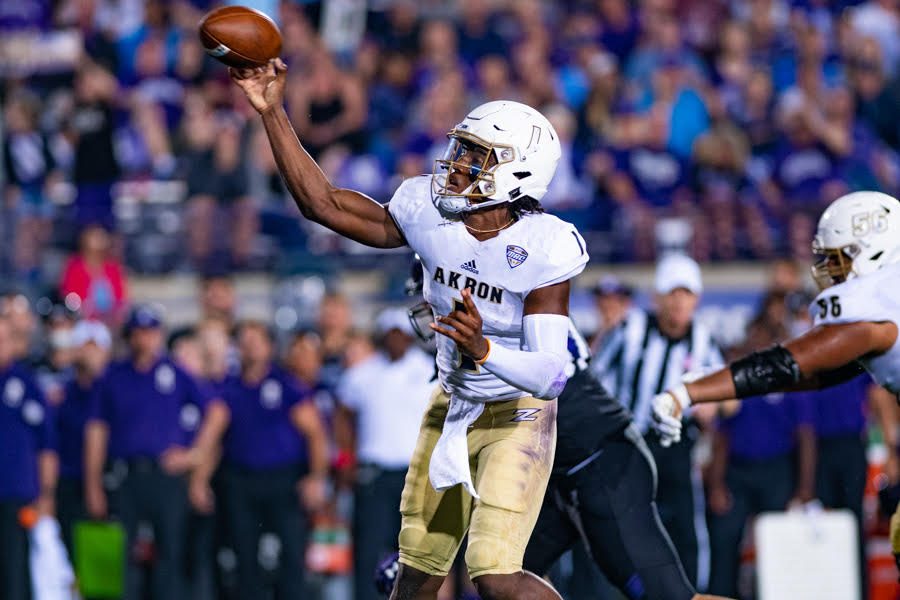 Kato Nelson fires a ball downfield. The Akron quarterback led the Zips to a stunning upset of Northwestern on Saturday.

What looked like an easy victory for Northwestern quickly became the Wildcats’ worst nightmare as NU (1-2, 1-0 Big Ten) lost 39-34 to middling MAC opponent Akron, blowing a 21-3 lead in the process.

After a dominant first half that essentially went according to plan for the Cats and saw them holding a three-score lead, the hosts allowed 16 consecutive points to open the second half, punctuated by a pick-six thrown by senior quarterback Clayton Thorson that cut the NU lead to 21-19 after Akron’s (2-0) failed two-point conversion.

The collapse continued apace in the fourth quarter, as Thorson fumbled deep in his own territory, leading to a Zips fumble recovery in the end zone that gave the visitors their first lead of the night, 32-28. On the next NU possession, the senior quarterback tossed his second pick-six of the game, and Akron went up 39-28 with 7:24 left.

Not to be denied, the Cats recorded their third straight turnover, this one on downs, on the next possession. Despite a touchdown catch from junior wide receiver Bennett Skowronek with 2:21 remaining, NU failed to recover the ensuing onside kick, then couldn’t come up with a prayer pass to the end zone as time expired.

The secondary was repeatedly burned with deep balls from dual-threat Zips quarterback Kato Nelson, who beat NU for more than 30 yards through the air on three different plays and drew a pass interference penalty on a fourth, setting up all three Zips touchdowns on deep pass attempts.

1. Re-write expectations for the season. The Cats have two losses, and four games remaining against teams currently ranked in the top 25. NU also faces tough road tests at Iowa and Minnesota. If Saturday night’s performance becomes the team standard, the Cats could very quickly be looking at a three- or four-win season. Obviously, it’s unlikely every opponent will score three defensive touchdowns, but the problems in the secondary are not new.

2. Capitalist offense works, too. Earlier this week, coach Pat Fitzgerald famously compared the run-pass options featured prominently in Duke’s offense to communism. Nelson piloted a much less-Trotskyist attack Saturday night, but NU had problems nonetheless. After getting torched by Purdue’s Rondale Moore in the season opener and giving up a long touchdown pass against Duke as well, the secondary showed approximately zero signs of being able to control explosive plays, allowing four completions of over 30 yards in the air and committing pass interference on another.

3. Something is wrong with Charlie Kuhbander. Last week, NU had five fourth down conversion attempts and converted only one, with three of the attempts coming in borderline field goal range. Facing 4th and 3 from the 16-yard line in the second half against Akron, the Cats could have kicked a 33-yard field goal. Instead, they went for it and Thorson threw his first fateful interception. Despite cleanly striking extra points throughout the night, Kuhbander missed two field goals, one from 35 yards in the first half and another from 43 in the second when the Cats still held the lead.