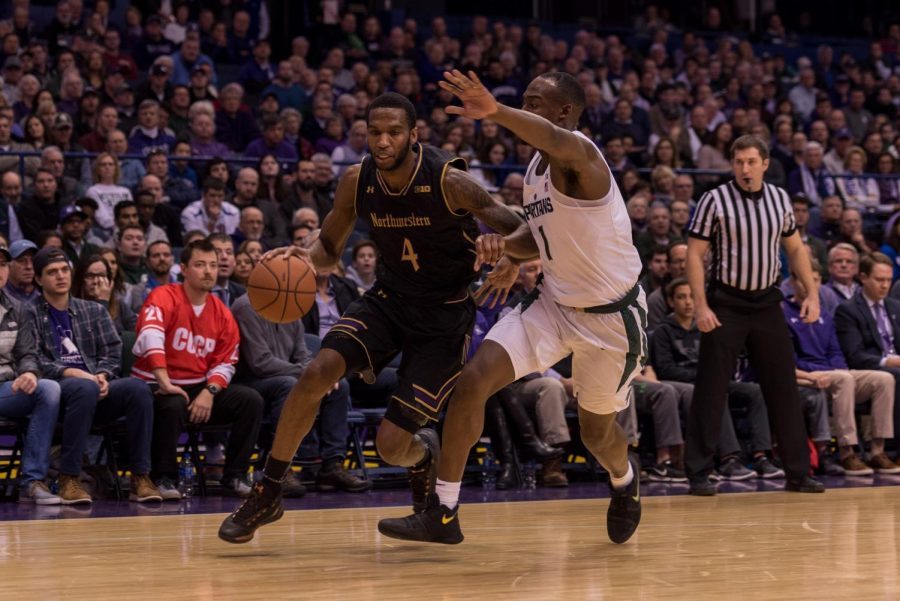 Vic Law drives on a defender.

1999. That was the last time a Northwestern basketball player was drafted. I wasn’t born yet, and you probably weren’t either.

Evan Eschmeyer was taken in the 2nd round of the NBA draft by the New Jersey Nets and, since then, the Wildcats have endured a 19-year drought of drafts without one of their names being called. I think that will change in 2019.

Vic Law, a redshirt senior, is the highest-rated recruit in the Chris Collins era. Although he hasn’t put up monster numbers so far in his career, he has been a solid role player for NU.

Over the last two seasons, Law has averaged 12.2 points and 5.8 rebounds. While these are good stats, he has the potential to blossom into one of the best players in the Big Ten and turn himself into a legitimate draft prospect.

Last year, Bryant McIntosh and Scottie Lindsey were considered the main scoring options for the Cats. The two guards combined to average 27 of NU’s 68.8 points. With both of them graduating, Law will become the primary option offensively.

Law was second on the team in scoring last year, despite missing five games due to injury. When healthy, he showed that he could be an offensive threat, scoring 30 points against Creighton, 21 points against Michigan State and 18 against Penn State and Minnesota.

Although Law’s stats last year were very similar to his sophomore year, his free throw percentage increase from 74 percent to 82 percent, an indicator that he will be a more consistent shooter.

If Law could increase his two-point field goal percentage to 48 percent or higher, he would be more intriguing to NBA teams.

Another aspect to Law’s game is that he fits the NBA’s, “3-and-D,” prototype. Many NBA players have thrived in their roles as a player who shoots three pointers well and plays physical defense. Players like Trevor Ariza, Avery Bradley, Danny Green and even Klay Thompson have made a niche in the NBA as, “3-and-D,” players. For his career, Law has shot 38.4 percent from the three-point line and, with another year in college, that number could get even higher.

Defensively, Law has the size of a small forward who can defend at the next level. At 6’7” with a longer wingspan, he can matchup against small forwards and power forwards in smaller lineups. Law might need to put on some weight to keep up with the wear and tear of the NBA, but he will have this summer to lift and get stronger before next season.

Vic Law will have to prove next season that he can be the go-to scorer when the Cats need a bucket. If he become a better scorer and continue to be a solid perimeter defender, NU’s NBA Draft drought will end in 2019.