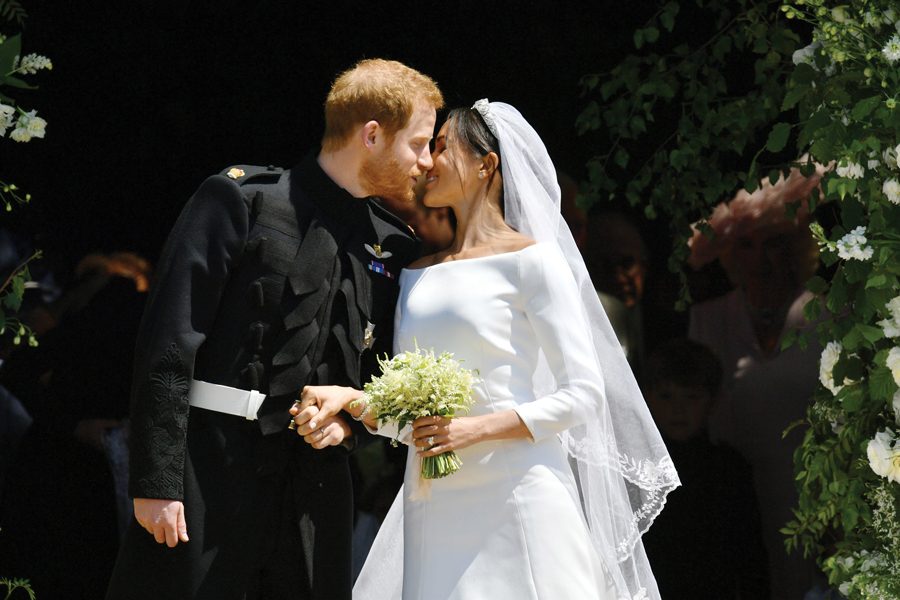 Prince Harry and Meghan Markle kiss on the steps of St George's Chapel in Windsor Castle after their wedding Saturday, May 19, 2018 in Windsor, England.

While Evanston has its own host of news to keep us busy, so too does Northwestern! From NU alumna Meghan Markle marrying some British guy to Medill’s #MeToo moment, here’s everything you need to stay up to date about what went down last year.

Meghan Markle (Communication ’03) wed Prince Harry in May at Windsor Castle, becoming the first American to marry into the royal family since 1937.

The former “Suits” actress was a theater and international studies double major at NU, as well as a member of Kappa Kappa Gamma sorority. Markle, now officially dubbed Her Royal Highness the Duchess of Sussex, met Prince Harry on a blind date in July two years ago.

The lavish ceremony, in which Markle came dressed in a Givenchy wedding gown and tiara, was followed by a carriage ride through town. More than 100,000 people waited along the procession route as millions others tuned in worldwide. Not bad for a Wildcat, eh?

Students in May released a list of 47 demands on the 50th anniversary of the Bursar’s Office Takeover — a 38-hour-sit-in to protest institutional racism — urging the University to better accommodate its students of color.

The list called for the University to improve campus culture for black students, departmentalize the Asian American Studies and Latina and Latino studies programs, and provide a smooth transition for food service workers.

Amidst the food service transition, one of students’ demands was that NU stop using the service E-Verify, which checks if employees are eligible to work in the U.S. Later that month, the University’s new provider announced it will not use the service.

When people think of STEM — the fields of science, technology, engineering and math — they usually think of calculus or biology.

In May, however, the Department of Homeland Security approved NU’s economic department’s earlier decision to reclassify economics as a STEM major.

The policy change, said Aashrey Tiku (Weinberg ’17), makes it easier for international students to secure a visa after graduation.

“Currently, a lot of employers don’t even accept applications from international students because they know that very likely, they might have to leave the country in a year,” Tiku said. “But if a student has a STEM visa, the employer can know that the student can stay in the country for three years, at least, guaranteed.”

In February, a group of former Medill School of Journalism students and employees wrote an open letter accusing Medill Prof. Alec Klein of “harassing” and “predatory” behavior. The group of women declared it Medill’s #MeToo moment, referencing the worldwide campaign.

Alison Flowers (Medill ’09), a former MJP research associate who helped coordinate and distribute the open letter, said her time working for him was “one of the most painful experiences” of her life.

In July, University spokesman Al Cubbage said the University “cannot confirm the details that have been made public,” regarding Klein and the investigation into his behavior.

After students, faculty and staff hid following reports of a man with a gun on the Evanston campus, Evanston police Cmdr. Ryan Glew said the reports were the result of a hoax.

Glew dubbed the event a “swatting incident” and said police think the call came from somewhere southeast of Rockford, Illinois. The person who was thought to be the girlfriend who was reportedly shot was located and is safe, he said, and officers don’t believe she was involved in the swatting incident.

Several undergraduate and graduate students said professors were inflexible with deadlines or made students take exams the night of the incident, shedding light on what they said is a broader toxic productive culture.