Go Cats! Show your purple pride with these traditions 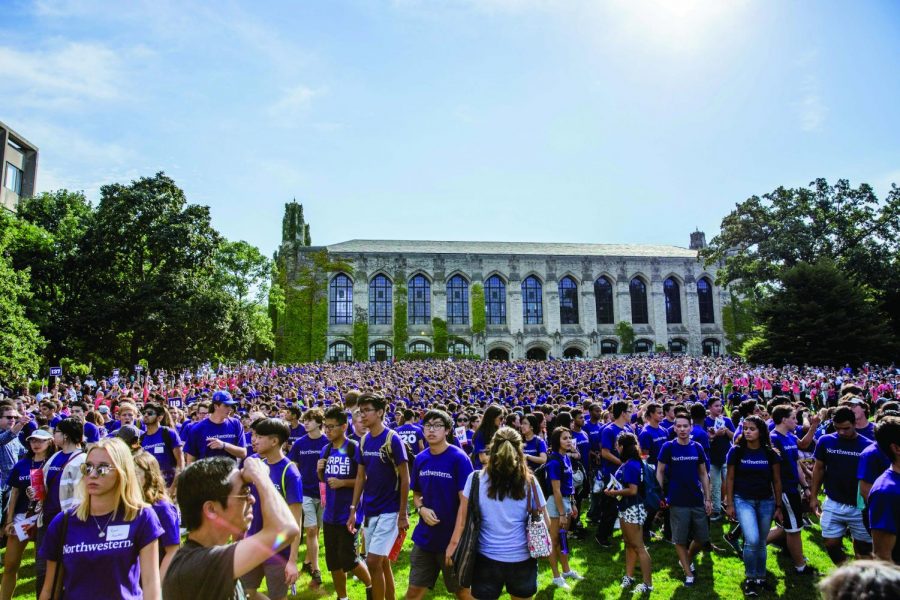 Like any university with a 150+ year history, Northwestern has many traditions that are taken seriously by students and alumni alike. Learn these before you come to campus and feel like a true Wildcat before you even step onto campus. These are just a few ways that NU students try to show off their Purple Pride.

March Through the Arch
March Through the Arch is a relatively recent NU tradition, only starting in 2009. Nonetheless, it’s one a favorite tradition among students at Northwestern, as it represents the bookends to a students’ time at school. During Wildcat Welcome, incoming students as part of the freshman class march through Weber Arch on the southeast corner of campus to kickoff their careers as Wildcats. The sidewalks along Weber Arch are always lined with family members, NU faculty and other students cheering on and welcoming the new students to Northwestern. The tradition comes back during a student’s senior year, when soon-to-be graduates march through Weber Arch the opposite way, providing a bittersweet moment signifying the end of their time at Northwestern.

Painting The Rock
Originally a water fountain, The Rock is a large rock located on South Campus right in the middle of University Hall, Kresge Hall and Harris Hall. The Rock, while stationary, is like a large billboard for student organizations around campus. Any student or group can sign up to guard The Rock for 24 hours, usually camping out in a tent stationed next to it. Once the 24 hours is over, it’s tradition to paint the entire rock, usually in the middle of the night. It’s commonly used by student organizations to tell students about upcoming events or shows or make a statement about current events. This is one of Northwestern’s oldest traditions, dating back to the 1940s, and something most students try to do before they leave campus.

Primal Scream
At the end of the quarter, Northwestern can get to be a stressful environment, Reading Period and Finals Week are especially hard times for many students. Primal Scream allows students to release some of that stress with a collective scream around campus at 9 p.m. the Sunday before Finals Week. While done mostly outside of the residence halls and libraries, some students have been known to scream in the middle of Periodicals, the silent part of Main Library. NU students do what they have to release a little stress and get ready to ace their 9 a.m. final the next morning.

The Fight Song
Northwestern’s fight song, “Go! U Northwestern,” was written during the 1912 football season by alumnus Theodore Van Etten, a NU Marching Band member. The song was first performed during the final game of season and has found a place in almost every NU sports game since. At football games, the fight song is sung by the crowd after every touchdown by Northwestern. New students will learn it during Wildcat Welcome to prepare for their first football game. Learn it by heart and be prepared to sing it loud when the Wildcats (hopefully) score a touchdown at the home games this season.

Wildcat Dash
Another tradition that occurs during Wildcat Welcome, the Wildcat Dash kicks off Northwestern’s first home football game with the new freshmen class. After a tailgate outside Ryan Field, new students run across the field before the football team comes out to play. It’s similar to running the bases at a baseball game before it starts. After, students head to the student section to watch their first game at NU students and show off some of those traditions, like true Wildcats.