Feeling Lost? Use this guide to Evanston and NU transit 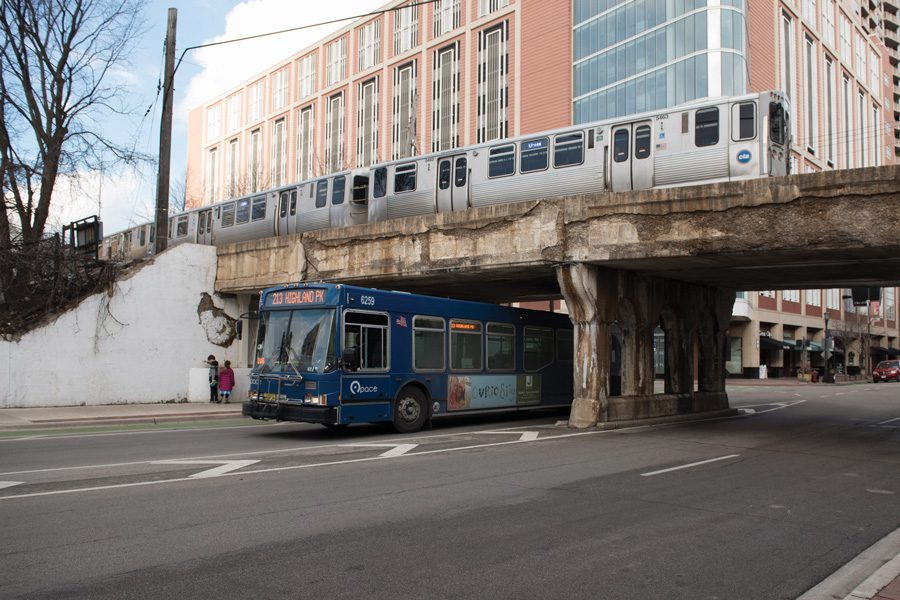 A Pace bus passes under the CTA Purple Line.

Though it can seem overwhelming, navigating the transit around Evanston and Chicago is fairly simple with a Wildcard and a Ventra card. The options range from the the free Northwestern-run shuttle buses to the L and the Metra, Chicago trains with stops right by campus.

Northwestern has a variety of shuttle buses to get you where you need to go quickly, and the best part: they’re free as long as you show your Wildcard. Download the app TransLoc so you can track the buses and plan ahead.

Evanston Loop: The Evanston Loop shuttle bus typically begins running at 6 p.m. and services many areas throughout campus and the more residential areas of the city. When there is extreme weather, such as single-digit temperatures, the Evanston Loop will run all day.

Campus Loop: Similar to the Evanston Loop, the Campus Loop bus runs every night, beginning at 9 p.m. in the fall and spring and 6 p.m. in the winter. The Campus Loop stops running at 3 a.m. and goes from the north side of campus all the way south in both directions, perfect for taking after a long night in the library.

Intercampus: The Intercampus Shuttle connects Northwestern’s Evanston and Chicago campuses. It runs regularly throughout the day and provides students with a free and easy way of getting into the city. The Intercampus stops in Chicago just north of the Loop, and has various stops throughout Evanston.

CTA 201 Bus: The CTA 201 bus is a free and easy way to get around Evanston during the day. It runs regularly and has stops wherever you need to go on campus or in the city — whether you live on South Campus and are running late for your lab in Tech, or need to make a quick trip to Old Orchard Mall in Skokie.

Pace 250 Bus: This bus is the best option for getting to O’Hare International Airport if you’re not quite ready to dish out upwards of $40 for an Uber or spend over an hour on the train. It’s only $2 a ride, and runs out of the Davis CTA stop just south of campus.

The L — a shortened form of “the elevated” — is Chicago’s subway system. With eight train lines, it can get you pretty much anywhere in Chicago and is an effective (if slow) way to explore the city. One way trips cost $2.50, and make sure to get a Ventra cCard early on. Download the app and instantly add value to the card to make traveling much easier.

Purple Line: The Purple Line train services Evanston and has various stops close to campus. The Davis stop is just south of campus, Foster is right about in the middle near a lot of off campus housing, and Noyes is on the north end, a short walk from the Technological Institute. On weekdays, the Purple Line express runs, skipping many of the smaller stops in Chicago and taking commuters straight into the Chicago Loop.

Red Line: The Red Line connects with the Purple Line at the Howard Street stop, and is typically the best way to get into downtown Chicago. It has various notable stops, from Addison (the closest to Wrigley Field) to Chicago (right by Navy Pier). The Red Line runs all the way through the city to 95th Street.

The Metra is a slightly more expensive and faster train that will take you into downtown Chicago. The Union Pacific North line has a station at Davis Street in Evanston and runs to the Ogilvie Transportation Center, with stops in the northern neighborhoods of Chicago. Students can also take the line to the northern suburbs of Chicago and even as far as Kenosha, Wisconsin. Tickets to the city cost around $5 and can be bought on the Ventra app or at the Davis Street station.

Safe Ride is a free ride sharing service available to students from 7 p.m. to 3 a.m., seven days a week during the academic year. Though often unpredictable and slow, Safe Ride’s are a good alternative to walking home alone at night, especially in the winter. Download the app to call a ride, and the drivers will pick you up anywhere in Evanston and drop you off anywhere on campus.