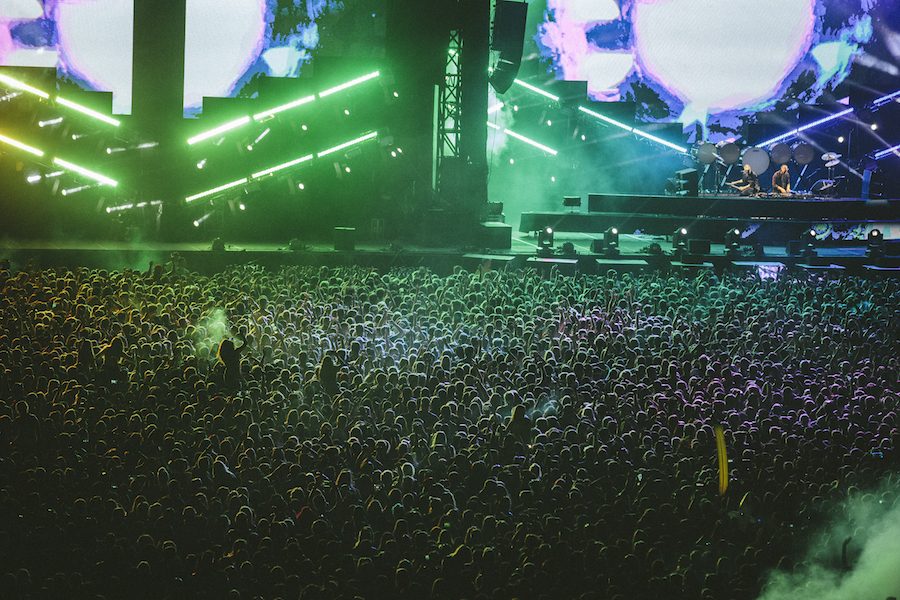 A crowd gathers around Perry’s Stage for Galantis on Thursday night. NU students were among the over 400,000 people who attended Lollapalooza last weekend.

As many Chicago locals and visitors outfitted themselves in their finest basketball jerseys and covered themselves in glitter for Lollapalooza, spotted among the festival crowd were a few Northwestern students.

The four-day festival in Grant Park attracted an estimated 430,000 festival attendees according to Chicago’s Office of Emergency Management and Communications. Headliners during the four days included Arctic Monkeys, The Weeknd, ODESZA and Bruno Mars.

McCormick sophomore Shana Capur said this is her second year attending the festival. Capur said she knew she had to go all four days this year after seeing the lineup — she couldn’t decide on “just one or two days.”

“I just loved the vibe of Lolla too,” Capur said. “I had all my friends there, (we) were just there to have fun and just enjoy music.”

Capur added that she tried to see artists she had never seen live at the festival. Some of her favorite acts included Galantis and ODESZA, electronic groups she wanted to see live for the first time. She said pop artist Dua Lipa also put on a good show on Saturday, something she didn’t expect from a “super pop singer.”

Weinberg junior Bobbi Throckmorton said she wasn’t able to go all four days of the festival because of work, but she attended both Friday and Saturday. She said one of her favorite performances was rapper Post Malone. She said he was great at getting the crowd excited for his next song.

“‘Everyone was so into it,” Throckmorton said. “Everyone was screaming out the lyrics. It was just such a huge performance, especially not to be a nighttime headliner, which was really fun.”

Throckmorton added that Bruno Mars, who headlined Friday night, also had a great performance. She called Mars a “fun little ball of energy dancing around the stage.”

For his first year at Lollapalooza, Weinberg junior Josh Pelberg said he bought the four-day ticket, but only went to the festival Thursday through Saturday. He said he enjoyed many of the live performances, but Bruno Mars and Post Malone also stood out for him because they were “great performers.”

“A lot of artists are not able to perform their songs at the same level as they are when they record,” Pelberg said.

Pelberg said he also saw Taylor Bennett, Chance the Rapper’s brother, at Lollapalooza and was impressed by his performance, despite not being as popular as other artists.

After threats of rain cleared up Thursday evening, festival goers were hit with an intense heat wave of over 90-degree weather Saturday and Sunday. Capur said the heat didn’t affect her festival experience too badly, as she and her friends tried to stay hydrated and stand in the shade if possible.

Pelberg said he was overall impressed by many of the performances and the large scope of the festival.

“I didn’t really know what to expect going in, but showing up and seeing how massive the event was was really cool.” Pelberg said. “I’ve never been to a music festival of that caliber before and it was just enjoyable.”