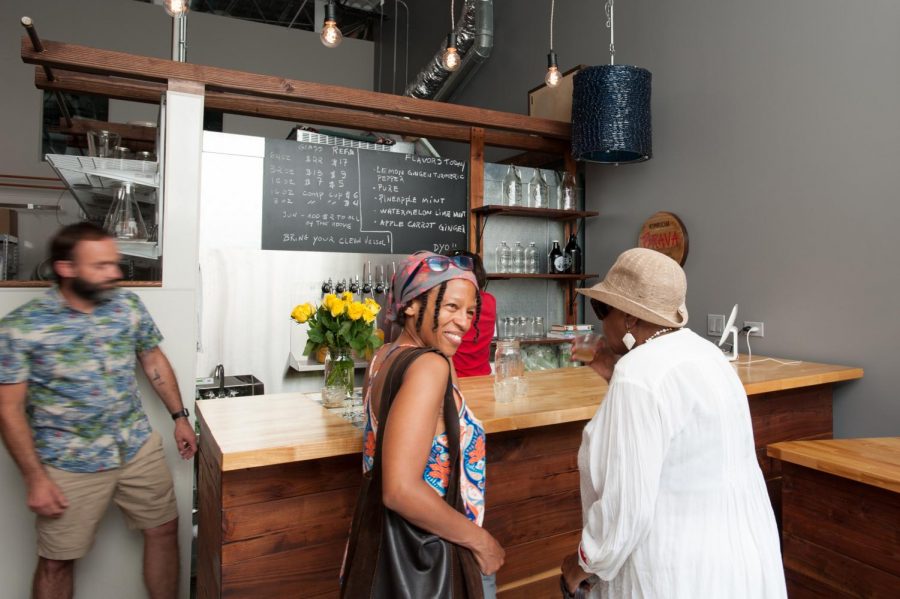 Customers sample kombucha at the Kombucha Brava taproom. The taproom is open on Tuesday and Thursdays from 2 to 6 p.m.

Regina Sant’Anna self-identifies as a “farmers market chaser.” She seeks out farmers markets in every city she visits, and has shopped at the local market in Evanston for years. This summer, she is experiencing the Downtown Evanston farmers market from the other side of the table selling home-brewed kombucha.

After gaining traction at the farmers market, Sant’Anna said she and her husband, Douglas Skites, decided to open a taproom in their production space on Custer Avenue. The taproom opened in mid-July.

Sant’Anna said Kombucha Brava began as a shared hobby between her and Skites. After pursuing separate careers and raising two children, they came to the realization that they were “not young chicks anymore,” she said.

“We decided that instead of not wanting to do anything in the next stage of our lives, it would be fun to do something that we both loved,” Sant’Anna said. “We started drinking kombucha, and we started liking the feel of kombucha in our bodies, and then we thought, ‘Hey, maybe we can do this together.’”

Sant’Anna said she and Skites experimented with several kombucha recipes at the beginning of their operation. Kombucha is a fermented tea beverage made with SCOBY, or a symbiotic colony of bacteria and yeast. As they worked to grow their SCOBY and perfect the fermentation process, they initially donated batches of kombucha to friends and local events, she said.

Eventually, Sant’Anna and Skites realized their kombucha might appeal to customers outside of their social circle, Sant’Anna said. They moved production from their home to a building on Custer Avenue, and began selling kombucha at the Evanston farmers market this May.

“Last week I think they sold out!” Gorman told The Daily in an email. “(The market) is a great way to get their product out to the public. It really is delicious as well as good for you.”

The Kombucha Brava taproom is open Tuesdays and Thursdays from 2-6 p.m., Sant’Anna said, and functions as more of a “fill-up station” than a sit-down place.

Sant’Anna said customers can bring their own “growlers and howlers” to fill with kombucha, or purchase kombucha in a glass jar. Though she offers compostable cups and straws for those who ask for them, Sant’Anna said she tries to reduce waste as much as possible. The eco-friendly mentality is central to Kombucha Brava’s mission, she added.

“We are making something healthy, and we want to stay healthy in the process,” Sant’Anna said. “And (we want to) put that healthiness inside the product that we make.”

Kombucha Brava is also served at Evanston restaurant Found Kitchen and Social House. Andrea Slivka, the sous chef at Found, said the restaurant started offering kombucha on tap after their reopening in June.

Slivka said diners have enjoyed the oak-barrel-aged flavor of the kombucha as well as the local connection.

“One of the great things is that they’re hyper-local, which is something we’re really into here,” Slivka said. “We have a lot of people come in who recognize (Kombucha Brava) as being sold at the Evanston farmers market and as being an Evanston business.”

Even outside of their production network, she and her husband have felt welcomed and supported by the wider Evanston business community, Sant’Anna said.

“I feel like we entered this sisterhood of businesses,” Sant’Anna said. “There’s this underlying understanding between all the businesses here of how hard it is to open a business … It’s quite lovely.”