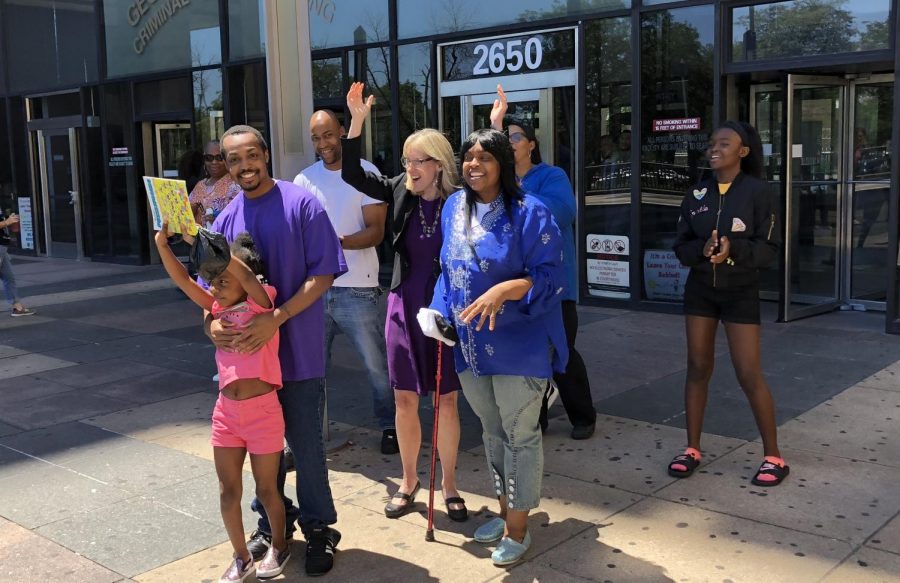 Marcel Brown (far left) reunites with his family after 10 years in jail. The state overturned Brown’s previous murder charges on July 18 with help from the Center on Wrongful Convictions.

After spending 10 years in prison, Chicago-native Marcel Brown walked out of prison on July 18 after the state of Illinois dropped his murder charges due to help from the Pritzker School of Law Center on Wrongful Convictions.

Brown was officially released after the state dismissed his previous murder charges, said Karen Daniel, director of the Center on Wrongful Convictions. Brown was arrested in 2008 in connection with the murder of Paris Jackson, after witnesses identified his car at the incident. Brown was 18 years old at the time and was charged with the murder, even though it was later determined that Brown did not fire the gun that killed Jackson.

Brown, now 28, said Daniel’s calls, visits and dedication to his case confirmed her faith in him.She listened to him and updated him on the process throughout his case, he said.

“It’s a good feeling because most people don’t help you out,” Brown said. “They just take your money and don’t really want to hear what you’ve got to say or when you ask them to fight a certain way, they go another way. With Karen it was like that but I was informed…. I trust her with my life.”

Daniel said Brown’s appellate attorney referred the case to the Center after he was unsuccessful in appeals court. She said the attorney reached out to the Center to see if they could file a post-conviction petition and grant his case another trial, which occurs when new evidence is introduced into a case.

The Center decided to take on the case in late 2014 after reviewing Brown’s lengthy interrogation tape, where he was in a room for 34 hours and interrogated by four different people, Daniel said. None of the videotaped interrogation was introduced in Brown’s original murder trial.

“It was coercive and Marcel was pressured,” Daniel said. “It was just awful. At the end of it, he made some statements that weren’t true. But at his trial, none of it was even put into evidence.”

Daniel said the only piece of evidence entered at the original trial was a short statement written up by one of the detectives, summarizing Brown’s statements at the end of the interrogation.

Pritzker Prof. Greg Swygert worked with Daniel and other law students on Brown’s case. He said at Brown’s original sentencing, the judge said he should receive the minimum sentence of 20 years for murder and 15 additional years because it involved a gun.

Daniel said in the Center’s process of further investigating, they also found witnesses that “told a very different story” than what was revealed in the trial. After speaking to Brown’s mother about his arrest, Daniel said the Center discovered Brown’s interrogators denied him his right to counsel, violating the Sixth Amendment of the U.S. Constitution.

Brown’s mother mother hired an attorney to represent him after he was arrested, Daniel said. When the attorney and Brown’s mother arrived at the police station and asked to see Brown, they were denied access. Daniel said that Brown was “never advised” that his attorney wanted to speak to him.

Daniel added that if this denied access had come out during Brown’s original trial, the “basis of his conviction” would not have been admissible at trial.

“He was never in trouble with the law,” Daniel said. “To this day, I can’t figure out why the police and prosecutor who interrogated him were so intent on getting him to incriminate himself when he was clearly not guilty.”

After presenting the new information about Brown’s case to a judge, Brown was granted a new trial. Swygert said he was “thrilled” when the state dropped his charges because it was “the just decision to make based on the case.”

He added that the state worked to have Brown walk out of the courthouse after the judge read the decision to drop Brown’s previous charges.

“(The judge) read his opinion from the bench and Marcel sat there between myself and Karen and sat up and listened and quietly cried tears of joy,” Swygert said. “It was a really touching moment.”

Brown said now that he’s been released, he’s looking forward to putting this behind him and getting the charges off his record.

“I’m going to get a job, try to enjoy life and go see the world,” Brown said. “From being in there, you see things on TV and learn about a lot of things that you didn’t know exist. I want to go check things out.”