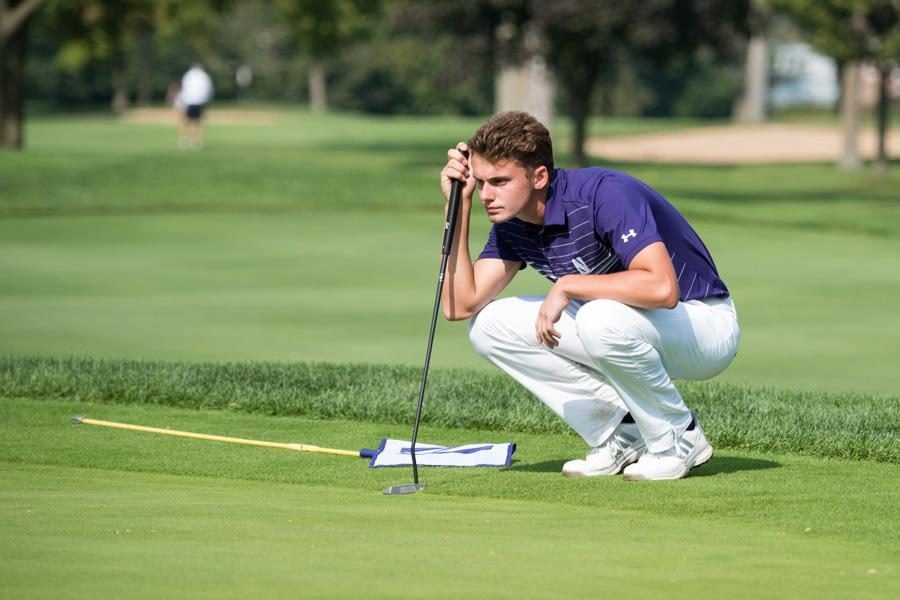 Ryan Lumsden lines up a putt. The senior men’s golf player represented his home country of Scotland at the 2018 U.S. Open in Shinnecock Hills.

On June 14, the top golfers in the world teed off at Shinnecock Hills Golf Club in Southampton, New York for the 2018 U.S. Open. Among the exclusive group: Northwestern senior Ryan Lumsden.

“It was an incredible experience, really, really interesting to see how my game stacks up against some of the best,” Lumsden said. “But on top of that, just a really fun week, and something I’ve dreamed about my whole life, so to be able to do it was really fun.”

Lumsden achieved that dream after performing well enough at a sectional qualifier in Columbus, Ohio to secure a spot. He represented his home country of Scotland in the tournament.

On a course that baffled Tiger Woods, Phil Mickelson, Jordan Spieth and other former major winners, Lumsden had plenty of company as he missed the cut. He shot 18 over par through two rounds, 10 strokes back of the cut line to play the weekend.

“Obviously I would have liked to have played better, but that’s the way it goes, and golf’s like that sometimes,” Lumsden said. “It was, more than anything, a great learning experience. It’s made me more motivated, made me want to practice even harder, and I can’t wait to get back out there again.”

The U.S. Open is traditionally the hardest of golf’s four major tournaments, with the “perceived goal” of the United States Golf Association to be having the winner finish at even par. The eventual champion, Brooks Koepka, finished at 1-over to claim his second straight U.S. Open Championship.

Like every golfer on the course, Lumsden struggled with the blistering fast greens and high winds at Shinnecock Hills.

“The biggest challenge was the unbelievable precision that was required going into the greens,” Lumsden said. “It’s the big thing I noticed that the pros did better than me. It was one of those situations where you thought that you hit a really good shot… but because I was out by maybe two yards in one place and three yards in another place, I’d really get punished for hitting shots that were just a tiny bit off.”

Lumsden actually jumped out to a rather strong start to the tournament, and through a combination of timing and struggles around him, was sitting in the top-20, ahead of players like Woods, Mickelson and Spieth, before shooting over par on five consecutive holes on the back nine.

However, Lumsden said he knew how the course was playing and that the scores would change further into his round. In the end, however, he tied with two-time major champion Martin Kaymer and finished one stroke behind four-time major champion Ernie Els.

With the U.S. Open behind him, Lumsden has entered the qualifying process for the next major tournament, the Open Championship, which will start July 19 at Carnoustie Championship Course in Scotland.

“I’m eager to go out and see if I can into a couple more majors,” Lumsden said. “Two rounds in one day, and I’ll see if I can give myself a go at another one.”