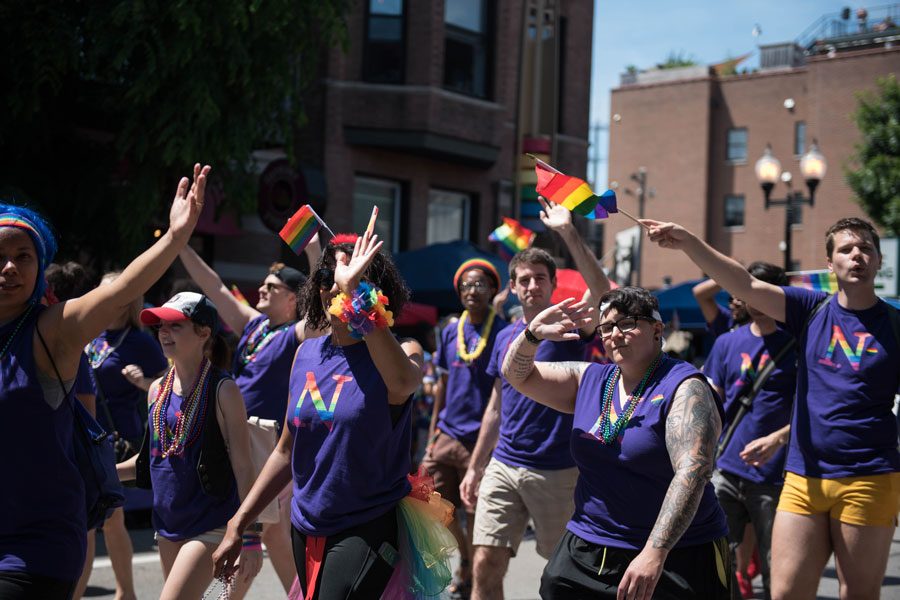 A Northwestern group marches in the 2018 Chicago Pride Parade. This was the first year NU was part of the annual parade, which runs through the Boystown neighborhood in Chicago.

About 100 members of the Northwestern community joined marchers at the 49th annual Chicago Pride Parade Sunday for the first year, one of the organizers, Eric Boberg, said.

The NU group — a flurry of purple and rainbow in matching T-shirts — marched the parade route through Boystown, a Chicago neighborhood with a historically large LGBTQ community.

Boberg, the executive director for research at the Feinberg School of Medicine, said he and Teresa Mastin, the former director of diversity and inclusion for Feinberg, submitted an entry for NU to be part of the parade and reached out to different groups throughout the University to participate and contribute to the cost of the parade.

Ten different NU offices and organizations, including Campus Inclusion and Community and the Women’s Center, contributed to and had representatives at the parade.

Boberg said the parade went “flawlessly,” noting the sunny weather and the enthusiasm of both the marchers and the crowds lining the sidewalk.

“We were surprised and thrilled at the number of people along the route who reacted with great enthusiasm to seeing Northwestern,” Boberg said. “We got a lot of positive feedback along the whole route and that was really great.”

Mastin, who has left her position at Feinberg and now works in a faculty position at Michigan State University, said she was surprised that NU did not march in the parade earlier.

She said the LGBTQ community is a huge part of the greater NU community, and it is important to acknowledge that through involvement in the parade. She added that for Feinberg specifically, being represented in the parade sends a message to crowds that the hospital is a safe and inclusive space to get medical care.

Adam Pluchinsky, a second year graduate student, marched with the NU group and said it was “fantastic.”

Pluchinsky, who serves as one of the social chairs of the Queer Pride Graduate Student Association, said it is important for universities in the Chicago area to be represented at the parade. The University of Chicago, University of Illinois at Chicago and DePaul University all marched in succession with the NU group, Pluchinsky said.

“We have a large presence in the area and a lot of people know about the universities, so it’s nice that we were able to attend,” he said.

Boberg echoed this sentiment, noting that it was important for NU to join the other major universities in participating in the parade.

He added that NU has done important work in LGBTQ research, which he said is even more of a reason for the school be involved with the parade. The University’s Institute for Sexual and Gender Minority Health and Wellbeing is the first of its kind in the country, he said.

“Northwestern is probably one of the — if the not the — most active local university in LGBT research,” Boberg said. “We have so many different organizations that support our faculty, staff and students on both campuses and I think it’s important that the wider community know how inclusive and welcoming Northwestern is.”