Renée Fleming urges graduates to use their voices at 2018 commencement 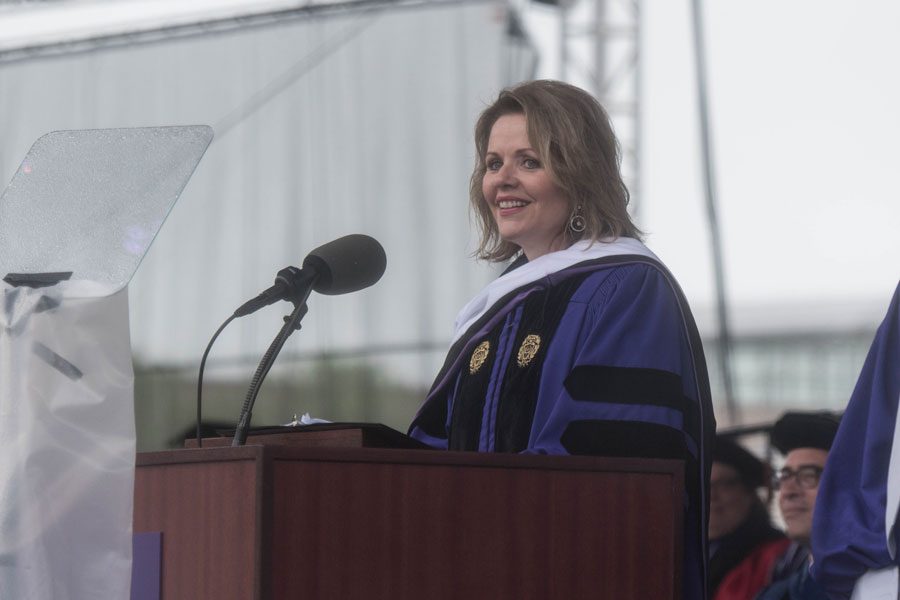 Opera singer Renée Fleming addresses graduates and their families at the 2018 commencement ceremony. Fleming urged students to develop and use their voices.

“I’m not just talking about singing and it doesn’t have to be loud,” Fleming said. “I’m talking about finding your voice, developing and caring for it and making it heard for years to come.”

Fleming, who also received an honorary degree at the ceremony, has won four Grammys and is currently performing on Broadway in the musical “Carousel.” Fleming has also taught at Northwestern, once leading a master class in 2014 for vocal performance students in the Bienen School of Music.

“Renèe recognizes how music positively impacts society and she does not let up on giving her support to the ground level, no matter how far she soars in her career,” Franklin said. “I find this deeply inspiring, and I thank her tremendously for bringing the arts into everyone’s hands.”

During her speech, Fleming brought students from Northwestern’s gospel choir to accompany her onstage. As she began her “voice lesson,” the students sang out, “Use your voice.”

Fleming said the graduates each have a waiting audience and a new voice to use after their time at Northwestern.

“Your time at Northwestern has already helped you begin to find your distinctive sound,” Fleming said. “You’ve spoken up in class, performed at Waa-Mu and Dance Marathon. You’ve chanted for the freedom to protest on campus and spoken your minds on politics, #MeToo and a lot more.”

She added that having a voice is a privilege, and that the graduates have a responsibility to amplify the voices of those who do not have that privilege.

But, Fleming also said the students have a long way to go in developing their voices, noting that their commencement symbolizes a new beginning.

“Years of dedication and hard work got you here but you’re still developing your voice,” Fleming said. “You’ll need skill and stamina to maximize your talent and when you finally have a stage — and you’re going to — people will listen.”

At the close of her speech, Fleming introduced three members of the graduating class onstage, asking each of them, “How will you use your voice?”

Finally, Fleming addressed all the graduates — “Do you have a voice?” — to which a resounding chorus of “Yes” responded.