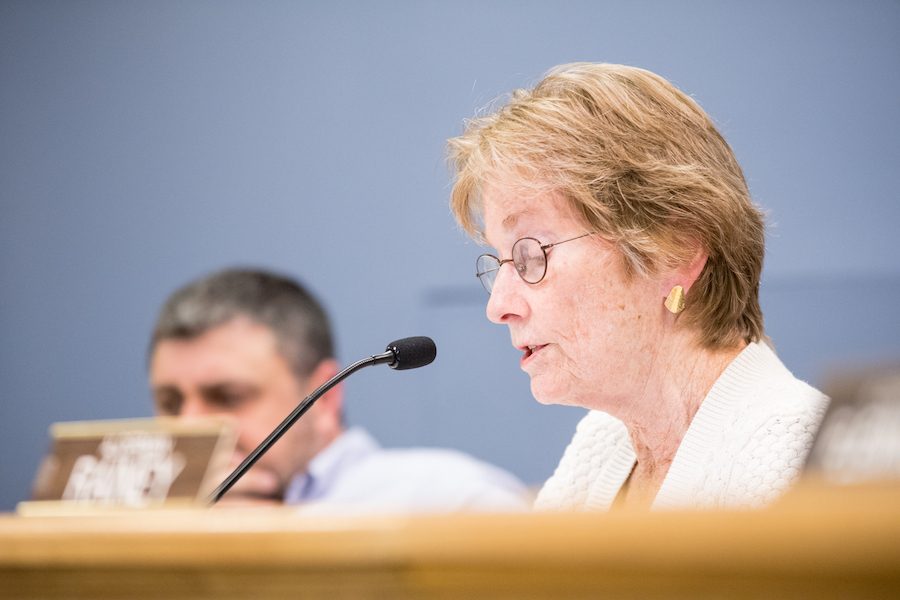 Ald. Eleanor Revelle (7th) speaks during a City Council meeting. Revelle voted against a resolution to begin negotiations with the Evanston Lighthouse Dunes group for the demolition of Harley Clarke Mansion.

Aldermen voted 6-3 to begin negotiations with the Evanston Lighthouse Dunes group regarding the demolition of the Harley Clarke Mansion at Monday’s City Council meeting.

The city received three estimates from local contractors for the proposed demolition, ranging from over $345,000 to almost $600,000. Evanston Lighthouse Dunes will begin talks with City Manager Wally Bobkiewicz about future plans for Harley Clarke.

Evanston Lakehouse and Gardens, a local nonprofit, previously discussed plans to repurpose the mansion into a space for environmental education and recreation. City Council denied a proposed 40-year lease in April after almost three years of communication between the city and the nonprofit.

“I want it to be a place that continues,” Niffenegger said. “It’s an inspiring place. I want it to inspire more people. … You can always destroy something later, but right now you can save it.”

Before the City Council meeting, supporters and members of Evanston Lakehouse and Gardens gathered behind the Lorraine H. Morton Civic Center to voice their concerns about the possible demolition. About 40 people attended the rally, carrying homemade signs and wearing matching blue shirts to show support for the restoration of the Harley Clarke Mansion.

Kustok, a member of the Evanston Lighthouse Dunes group, told The Daily she’s unsure of what the exact timeline will be moving forward, but that she’s ready to start working on the project.

“We’re happy to have a seat at the table and pursue this,” Kustok said. “Walking away from tonight, I do also realize that there are a lot of people in the community that fondly remember the house.”

Kustok added that if the mansion is demolished, it won’t feel like a “victory,” but it seems to be the only “fiscally responsible” way forward.

Ald. Judy Fiske (1st) voted in favor of the resolution. However, she said that the council will need more information regarding the plans for demolition from the city manager and the Evanston Lighthouse Dunes group. She said the debate over the future of the Harley Clarke Mansion is dividing Evanston residents.

“In the end, we’re not all that far apart,” Fiske said. “The thing that separates us is not a love of natural environment and not a love for Evanston, but we have an issue with the house. I don’t see us overcoming it.”

Fiske added that lakefront protection has been her top priority in her three terms as alderman and the renovation of the Harley Clarke Mansion as planned by Evanston Lakehouse and Gardens would not aid preservation efforts. She said the damaged relationship between the city and the nonprofit has also affected this discussion and the group is “not a positive partner for the city.”

Ald. Eleanor Revelle (7th) voted against the resolution and said she thinks the Harley Clarke Mansion is a way to show Evanston’s commitment to the past for future generations of residents to enjoy.

“This old home is the only one that belongs to all of us in the community,” Revelle said. “It’s the only lakefront property in Evanston that regular citizens can enjoy and experience first hand. Historic buildings are important to the fabric of a community, especially in a community like Evanston, where historic preservation is part of our identity these days.”

Following the vote, Revelle told The Daily that she hopes to get more information from the Evanston Lighthouse Dunes group as they move forward with the city.

“There’s so many details about their proposal that we still don’t know,” Revelle said. “We need to know exactly what the plan and what their steps will be. They mentioned a community involvement piece, so how does that fit in?”

Revelled added that while she’s interested to see more details, she will still vote against the demolition or deconstruction of the mansion.

Kustok said that whether the Harley Clarke Mansion is demolished or deconstructed will depend on fiscal responsibility.

“You have to look at what makes financial sense,” Kustok said. “We’re anxious to have a discussion with the city and really flush out those bids and understand what’s involved in each one and which one makes the most sense.”