Football: Wildcats to play Wisconsin in 2020 at Wrigley Field 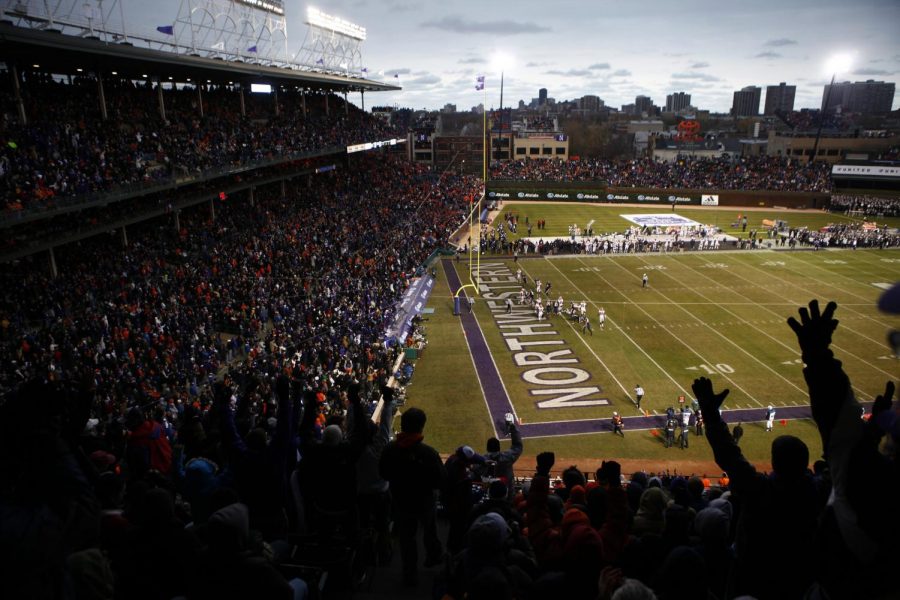 Northwestern fans celebrate a touchdown against Illinois in a 2010 game at Wrigley Field. Wildcats football will return to the baseball park a decade later to face Wisconsin.

CHICAGO — After a 10-year hiatus, Northwestern football will return to the north side of Chicago in 2020.

In a news conference held Tuesday morning at Wrigley Field, Northwestern Athletics and the Chicago Cubs announced that the Wildcats will play Wisconsin at the Cubs’ home park on Nov. 7, 2020.

“We are not going to play here in September and October — baseball has a home here, so that cuts out all the October dates — so it really came down to November,” athletic director Jim Phillips said. “It made sense from a date standpoint. It makes sense from a timing standpoint. (Wisconsin) is going to be a great opponent for us.”

A previously announced agreement between NU and the Cubs in 2013 promised five future football games at Wrigley Field. Then in January 2017, it was announced that the Cats would return to Wrigley Field for a game in 2020.

During that time frame, NU has also held a 2013 baseball game and a 2014 lacrosse game at the park.

The last time head coach Pat Fitzgerald and the football team played at Wrigley Field was on Nov. 20, 2010, against rival Illinois. ESPN’s College Gameday broadcasted from outside the stadium that morning, choosing the game as the site for its show over four top-25 games held that weekend. Played in front of a crowd of 41,058 fans, NU lost the game to the Fighting Illini, 48-27.

Fitzgerald said the atmosphere at that game was unlike any other regular season game and that it was “inspiring” for his team to be a part of it.

“We got off the bus and it was like a bowl game,” Fitzgerald said. “That would be the best way for me to describe it. We’ve had the privilege to play in bowl environments and it was almost identical to that for our fans.”

Since the 2010 game, Wrigley Field has undergone extensive renovations to upgrade the stadium. One of these upgrades was to put the third-base dugout and first four rows behind it on a temporary platform.

At the 2010 game, all offensive plays were run in the direction of the third-base dugout end zone because the configurations of the field resulted in little room at the back of the right field end zone.

With the renovation along the third-base side allowing for an expansion of field space, the game will be played normally, with the teams going both ways.

In addition, Crane Kenney, president of business operations for the Cubs, said the organization is in discussions with multiple conferences in hopes of bringing a bowl game to Wrigley Field and Chicago.

Both Fitzgerald and Phillips said they think a bowl game can work, citing the 2016 Pinstripe Bowl as an example of a successful cold-weather, baseball-stadium-hosted bowl game. Kenney also discussed the Pinstripe Bowl and Yankee Stadium as a comparison for Wrigley Field and their quest to have a bowl game in the near future.

“If New York is a good place for a bowl game, why isn’t Chicago a great place?” Kenney said.