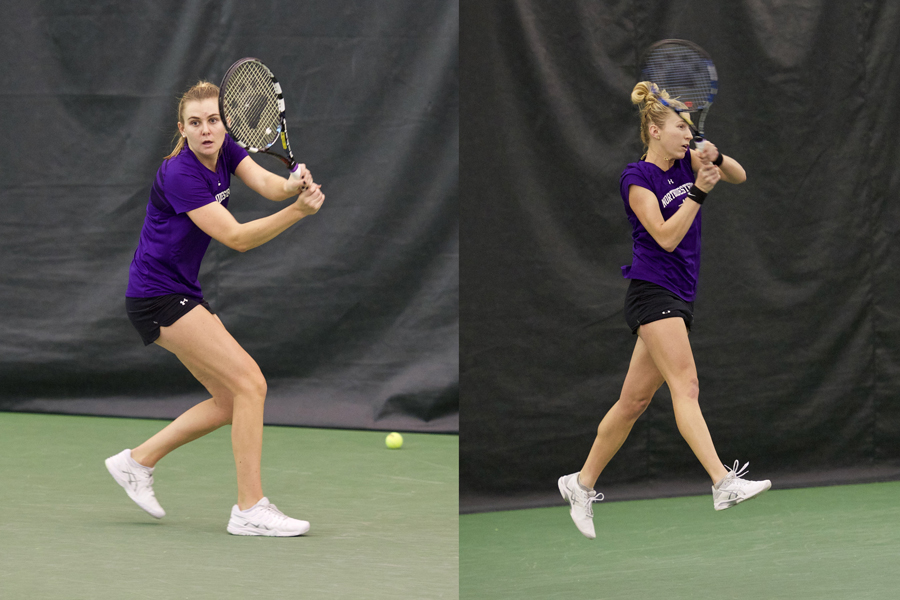 The dominant doubles duo of Erin Larner and Maddie Lipp that entered the NCAA Doubles Championships as the fourth-best pair in the country almost never existed.

Coming into being after coach Claire Pollard paired the two together during their senior years, Lipp and Larner’s partnership was possible only because of a shoulder injury that forced Lipp to redshirt her sophomore year.

But a decision that came four years earlier had much greater implications for the future of Northwestern women’s tennis.

“My sophomore year (of high school), I remember packing my soccer bag to take to National Clay Courts just in case, because my soccer team made nationals at the same time,” Lipp said. “When my tennis coach figured out that I packed my bag, he basically gave me an ultimatum. He told me I needed to choose. … So I made my decision and quit soccer two weeks after.”

Lipp, of course, wasn’t the first talented athlete to have to choose between multiple sports in high school, but her commitment to tennis and later to the Wildcats would impact the program for years to come.

A five-star, blue-chip recruit coming out of Lake Forest High School, Lipp said she was courted by and had to choose between Duke and Michigan — traditionally, two women’s tennis powerhouses — as well as NU, which had dominated the Big Ten over the past decade.

“I was having a hard time making a decision,” Lipp said. “Ultimately, Claire had been going to my matches since I was 12, so I think her commitment and interest level is really something that drew me.”

When Lipp arrived on campus as a freshman in 2013, the Cats had won a Big Ten title in some capacity (either as regular season champions or by winning the conference tournament) for 15 consecutive years.

After bringing in the third-best recruiting class that year, according to the Tennis Recruiting Network, NU added yet another title to its streak.

“I always had the expectation that I was going to one of the big tennis schools, like Duke or Michigan,” Lipp said. “Then, freshman year we really slid by that final against Michigan, and it was the most amazing feeling.”

But if Lipp expected three more years of similar success, she was sorely mistaken.

Even after adding yet another five-star recruit to the team in Larner, the Cats struggled to overcome the loss of key players due to graduation and injury. Lipp and former NU star Manon Peri each fell victim to injury early in the 2014-15 season, forcing Larner to step up at No. 2 singles in her first year.

“(Peri) got injured, Maddie was already out and they had graduated three seniors that were really solid the year before,” Larner said. “All three freshmen knew that we had to make as much of an impact in the lineup as we could.”

Larner was no stranger to contributing in a team setting. She went undefeated in her four years on the Jesuit High School team in Portland, Oregon. Meanwhile, she also made a name for herself on the USTA and ITF junior circuits en route to becoming the No. 1 recruit in Oregon and top 30 in the nation.

Despite her achievements, Larner said she felt overlooked because Oregon was not known for cultivating top talent.

In fact, she believed Pollard had lost interest in her at one point during the recruiting process. However, the relationship persevered, and when it came time, Larner made her decision very clear.

“Northwestern was the best opportunity to play (at a) high level and have great academics,” Larner said. “I also really liked Claire as a coach; I knew she that she would push me to get better.”

While Larner and Lipp weren’t immediately able to recreate the success that had largely preceded their arrival — the 16-year title streak turned into a three-year one with no hardware — their faith in Pollard’s abilities as a coach and their own unrelenting work ethic ultimately paid off.

Coming off her shoulder injury, Lipp said she worked daily to improve her game in a way that is atypical for a Division I tennis player: by altering her forehand stroke.

Lipp explained that coming off her surgery, she became increasingly bothered by what she called a “hitch” in her forehand. To try to solve the problem, she made a bold transition to a rather unorthodox two-handed forehand.

“It felt more natural, which is so weird,” Lipp said. “I knew I had to work extremely hard, because I had three years left of tennis, and I had to make up for (the) many balls I hadn’t hit on a two-handed forehand.”

That stroke change proved indicative of the work ethic that made Lipp and Larner such a successful senior duo and allowed them to restore the Cats’ program to the dominant state that had once enticed their commitments.

The two posted a 19-4 record at No. 1 doubles together, becoming the top-ranked doubles team in the nation at one point during the season. Their efforts led NU to an undefeated Big Ten regular season as well as some success on the national stage.

Pollard repeatedly referred to Lipp this season as one of the hardest-working players she’s ever coached. And Lipp, in turn, used many of the same words to describe her partner.

“Watching someone work for something so hard is inspirational,” Lipp said about Larner’s work ethic. “Say, on a day where I don’t want to work, or I don’t want to go to practice — which is not often, but it does happen — it’s inspirational to see a teammate always wanting to work. It keeps you going, and I think that’s what Erin’s done for me.”