For nearly 137 years, The Daily Northwestern has been the newspaper of record for Northwestern and Evanston. And for the vast majority of that time, we have not been representative of either of those communities.

It’s no secret that our newsroom’s lack of diversity has led — and continues to lead — to mistakes and poor reporting decisions. Just a few weeks ago, we mistook one woman of color in our coverage of an inequality panel for another woman completely uninvolved with the event. Last quarter, we misquoted a black man and, as a result, perpetuated harmful stereotypes about the black community. And there have been several instances in which we have incorrectly identified sources’ pronouns.

While historically, journalism has not accurately or fairly covered or represented people of marginalized identities, we can — and must — take concrete steps to better serve them.

Our job as a publication is to deliver information to the communities we cover. This means not only being aware of what is happening around us, but being representative of those communities ourselves.

We are ending our year of publication by releasing this report to acknowledge that this newsroom is, in fact, not representative of the area it covers. This is a way to reflect on a year — and a broader history — of inadequate coverage of marginalized communities and to commit to making this publication a more inclusive space as we head into the next academic year and beyond.

Moving forward, we intend to regularly produce a comprehensive report of this kind to hold ourselves accountable as a newsroom — a practice we acknowledge should have been put in place a long time ago. While we cannot change The Daily’s mistakes, we view this report as a first step in acknowledging our shortcomings and improving our practices.

Several weeks ago, we circulated a diversity survey among our staff. For publication purposes, individual responses remain anonymous. 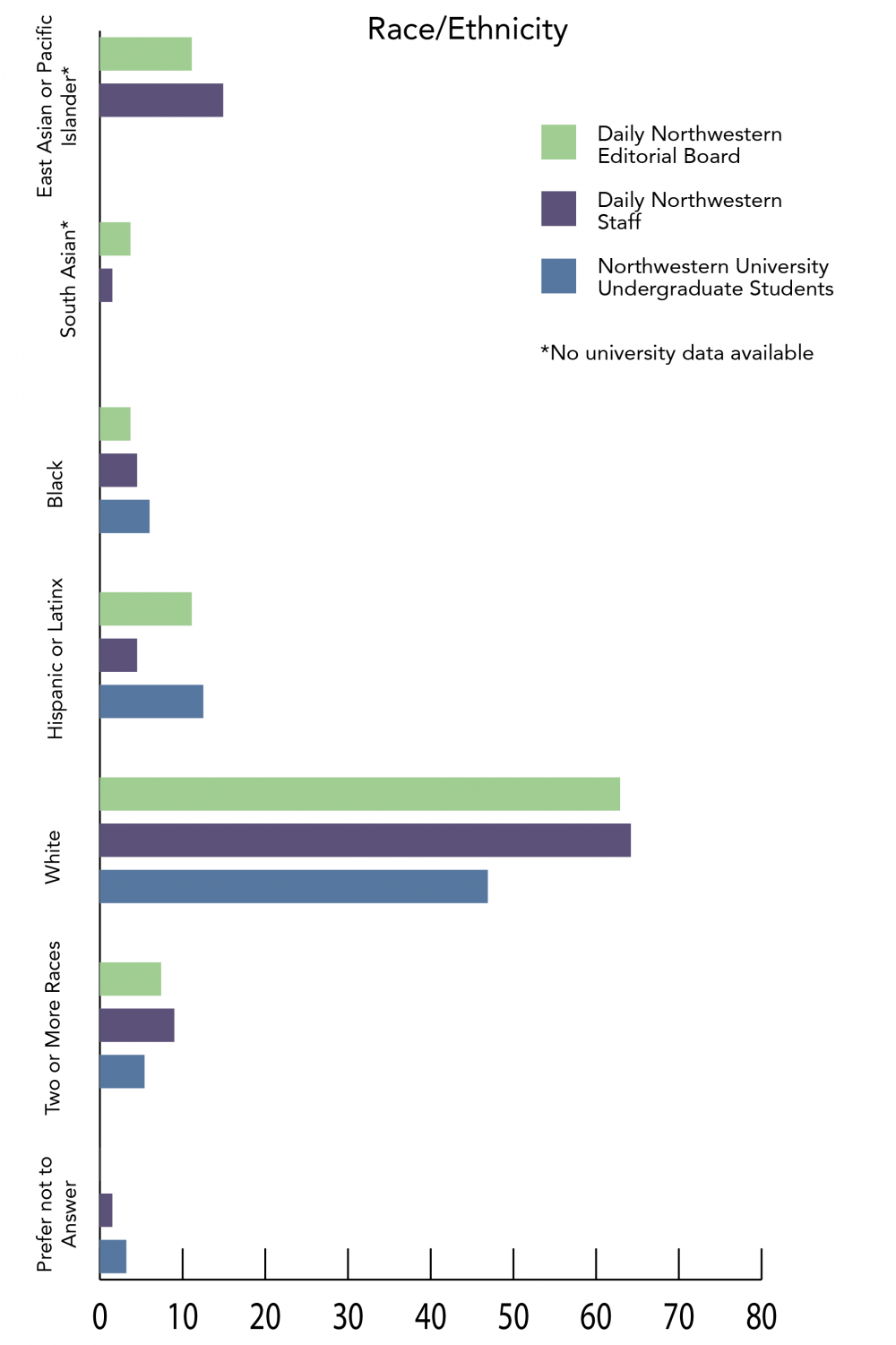 *Just for this graphic, data for Editorial Board and Staff Members are separate.

We polled race according to the corresponding question on the U.S. Census while adding separate options for East Asian or Pacific Islander, South Asian and mixed-race — identities that are often overlooked and oversimplified.

We compared our data with the University’s fall 2017 enrollment data to gauge how well our newsroom is representative of campus. It’s important to mention that even racial percentages at The Daily that align with NU’s data should not necessarily be considered acceptable, as NU itself is not racially diverse.

Our percentage of multiracial students on staff is mostly consistent with NU’s demographic data. Black and Hispanic/Latinx students are underrepresented on staff, and, for black students, that disparity increases within our editorial board.

East Asian and South Asian are not separate categories in the University data, which only lists “Asian American” as an option. As a result, we chose not to make direct comparisons between that data and ours. However, the combined percentage of South Asian and East Asian students on our staff approaches the approximately 17 percent of NU undergraduates who identify as Asian American. For the editorial board, that number is slightly less than NU’s.

Most importantly, both The Daily’s general staff and its editorial board are overwhelmingly white — disproportionately higher than the 46.9 percent of white students that make up NU’s undergraduate population. No respondents to our poll identified as Native American or as Middle Eastern/North African — which is not a category on the University’s survey. 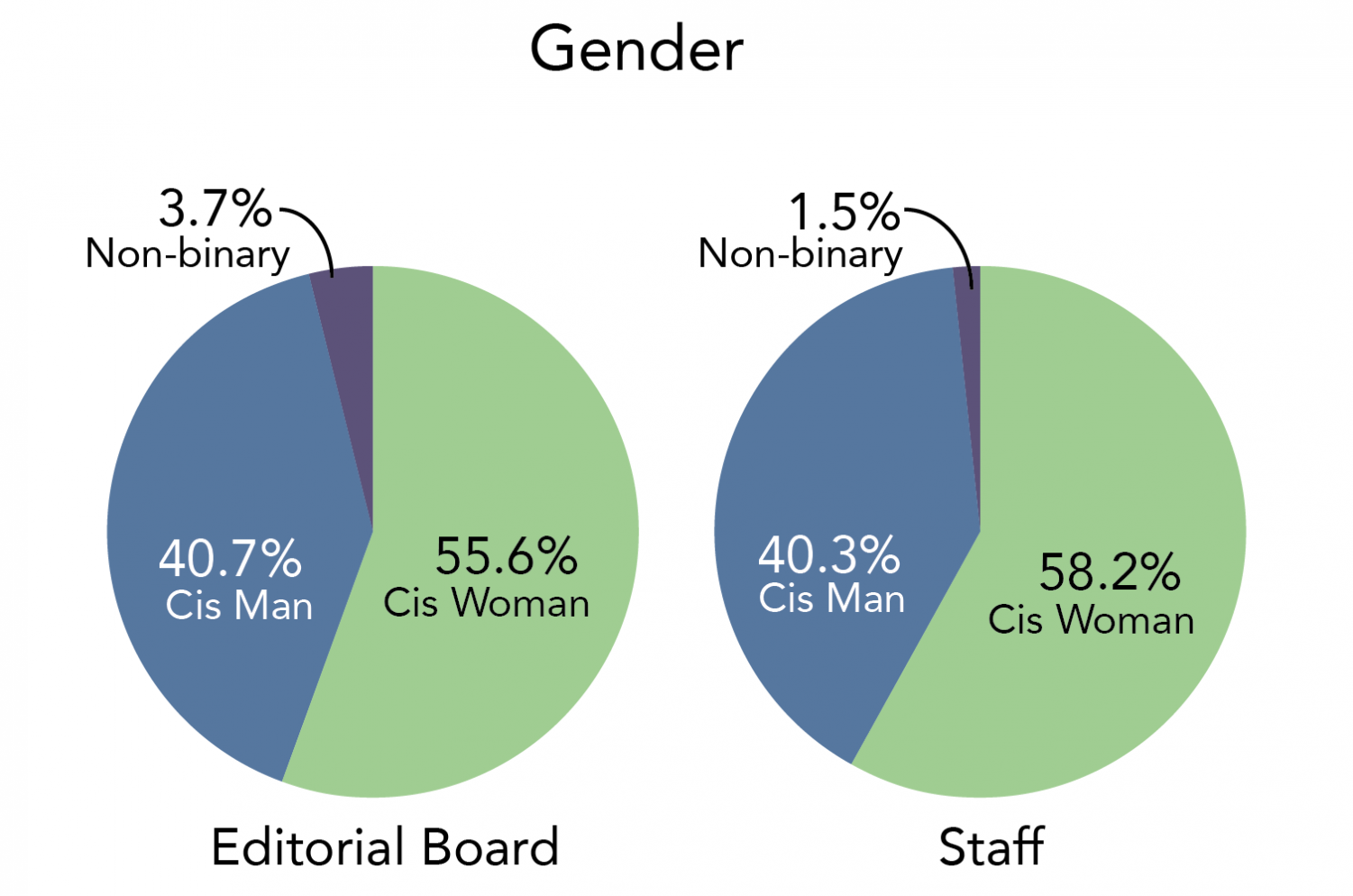 The Daily has a greater percentage of women than men, while the NU undergraduate average is nearly an equal split. Transgender and non-binary representation across the newsroom is quite low. 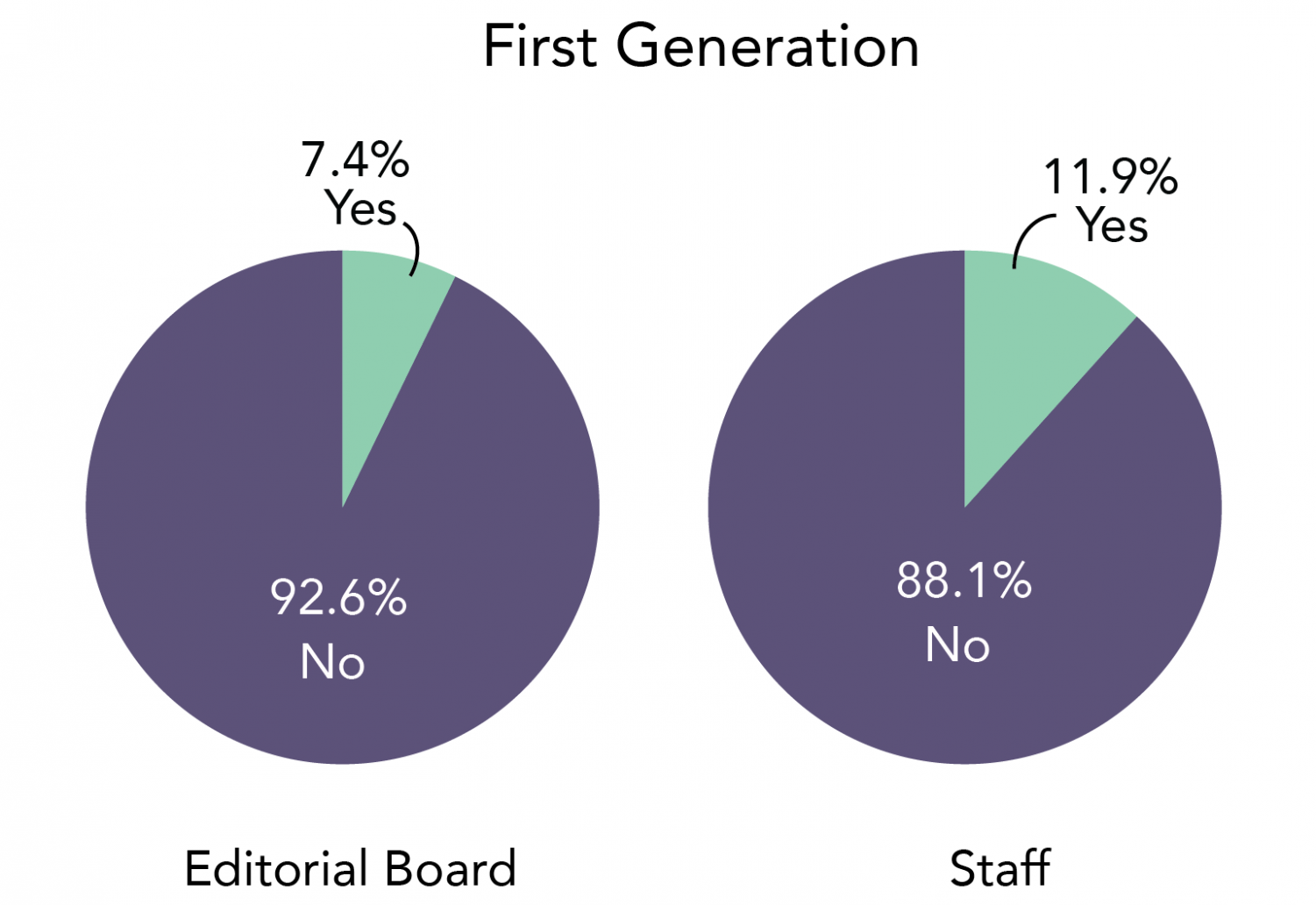 A minority of Daily staffers and editors are first-generation college students; this mirrors the 10 percent of NU undergraduates who identify as such. Slightly more than half of our editorial board receives financial aid from the University, while the majority of the staff does not. 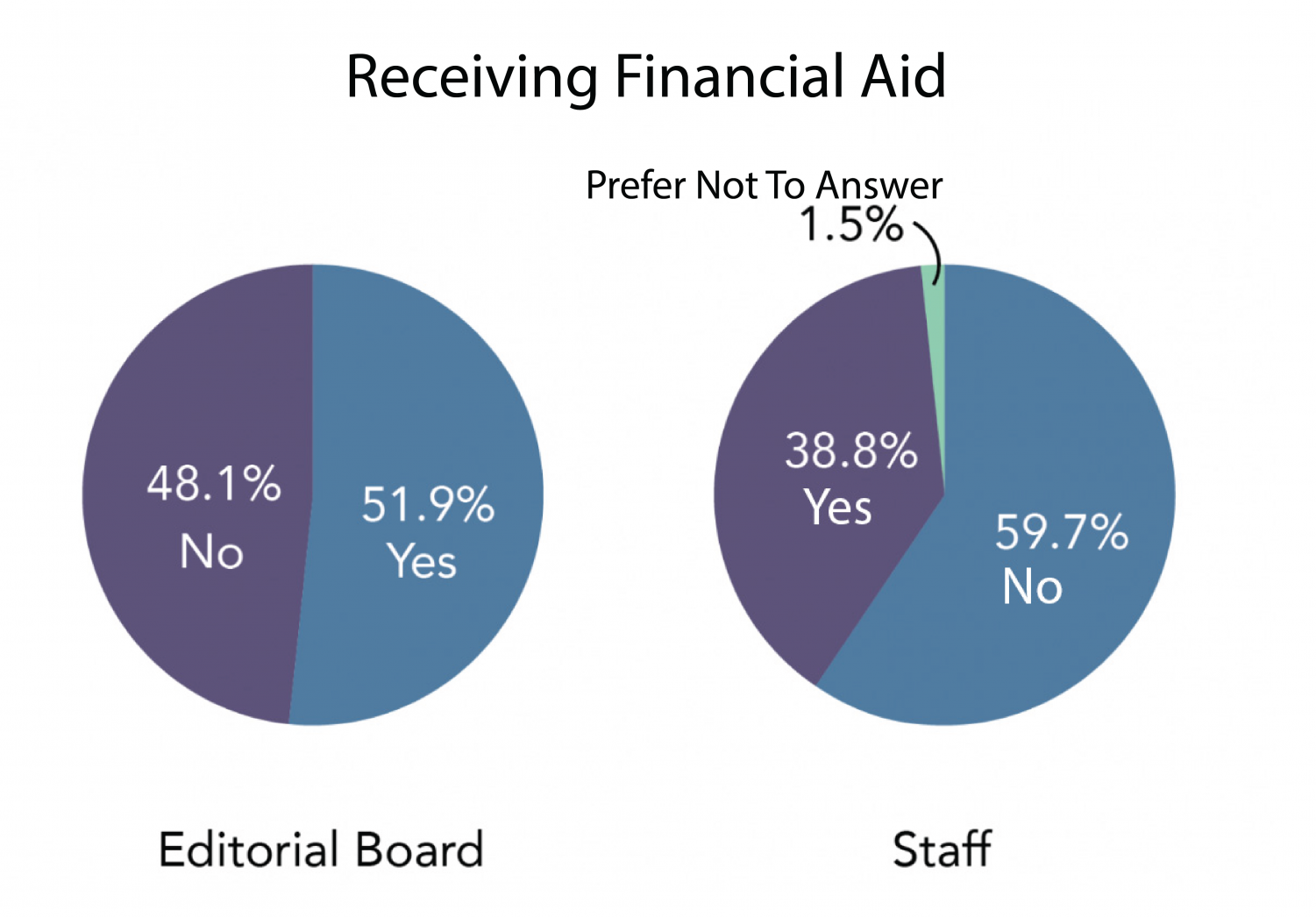 We felt that framing the question around receiving financial aid from the University would be a more accurate measure than asking students to self-identify whether they were low-income. This does not take into account how much financial aid students receive. 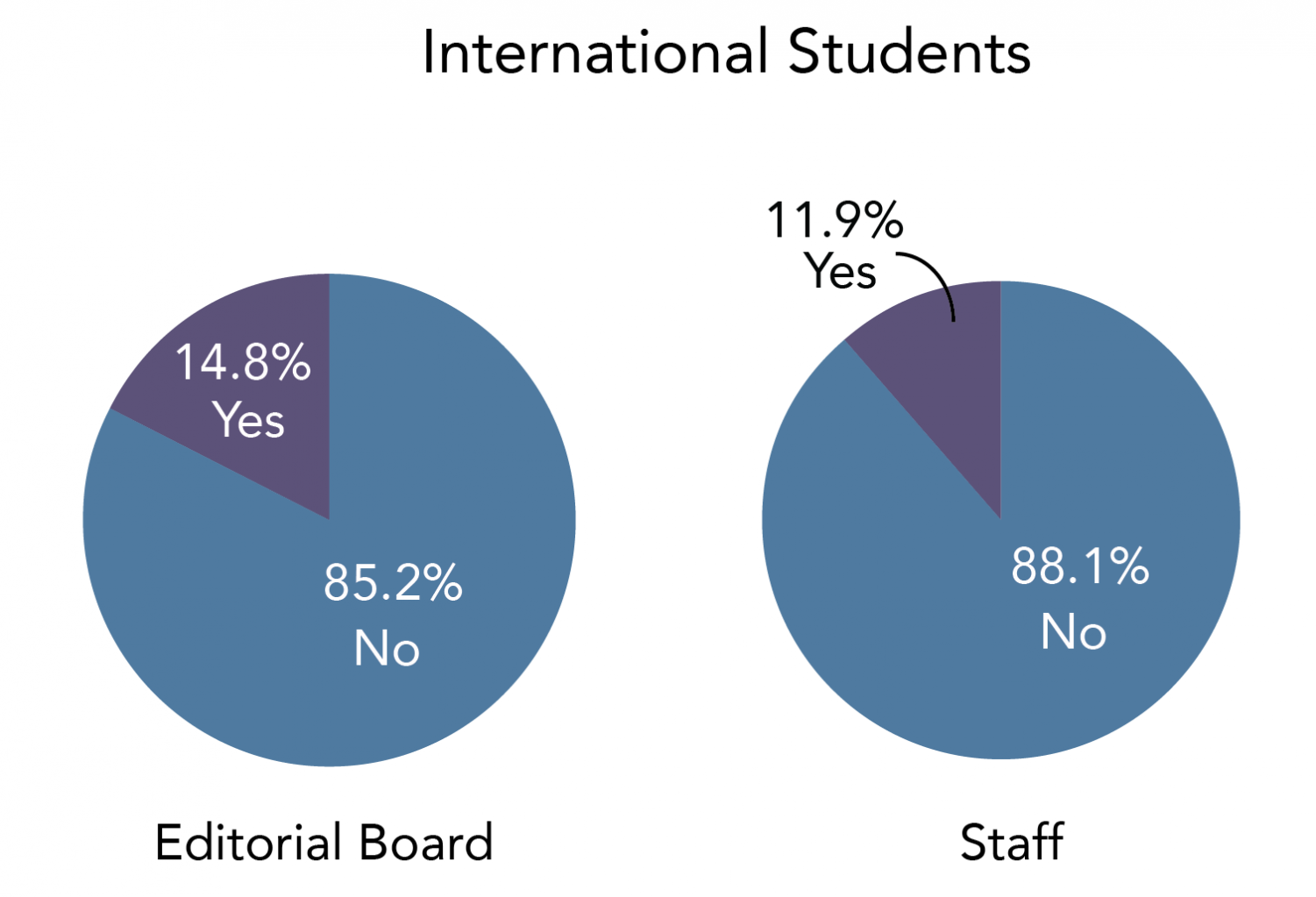 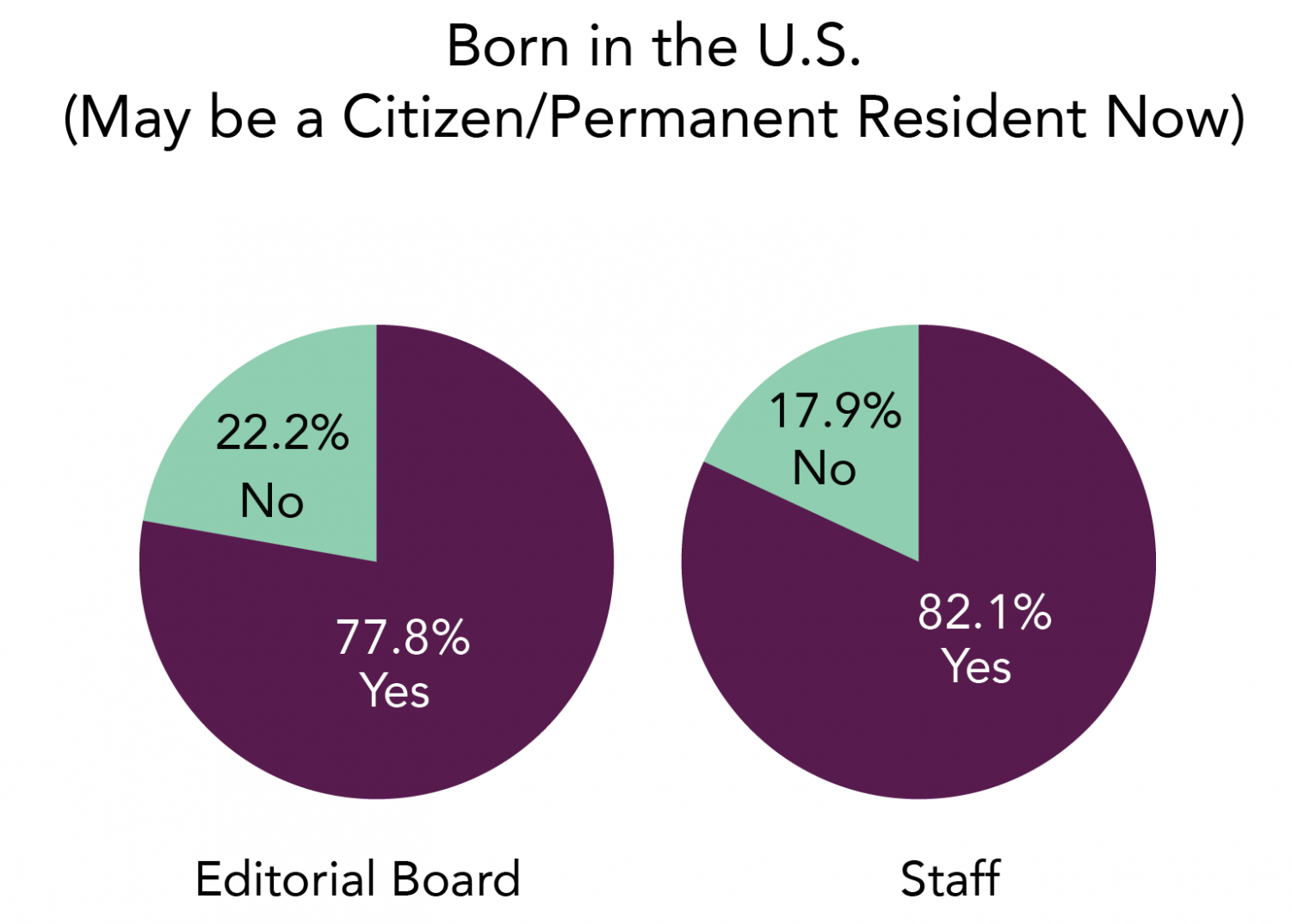 It is clear that, in regard to issues of diversity and inclusion, The Daily has a lot to improve on. We need more people of color in our newsroom; we need to represent more people of marginalized identities as sources; and we need to seek out stories about these communities beyond times of crisis.

We also need to train our reporters and editors to handle stories with sensitivity, particularly ones that concern marginalized groups who have not been traditionally well-represented in our coverage. The fast pace of a daily newspaper often leads to prioritizing getting stories done quickly over ensuring our reporting is sensitive — however, we understand that we need to be conscious of not only who is part of The Daily, but how they’re working.

We know diversity doesn’t happen organically. We need to make an active effort to be more representative of our university. We encourage everyone who is interested in journalism and sees holes in our reporting to consider joining us. We need not only your talent, but your voice.

We’re also working to improve our recruitment and training process for new reporters by including a more deliberate discussion of diversity and inclusion in journalism. In addition to being trained on the anatomy of a story, new reporters will go through an additional session on how to approach cultural sensitivity and how personal identities affect their work.

We are aware that, despite any changes we make to be a more representative, more aware newsroom, we are still prone to errors. Because of this, we will update our correction guidelines to add a specific policy in which — for mistakes furthering harmful biases toward minority communities — we publicly apologize for what went wrong.

While dialogues about diversity and inclusion are necessary, it is often easy to just stop there. We understand that, throughout its history, The Daily has not been friendly to students and community members of marginalized identities. We recognize there have been instances in The Daily’s history in which our newspaper has not been sensitive. We can’t erase past errors, but we would like to acknowledge them in the name of transparency.

We are committed to taking action to combat bias and ensure we can report on minority communities fairly, accurately and respectfully. We have a ways to go, but we hope this editorial — and the new practices that come with it — can be a step in the right direction.