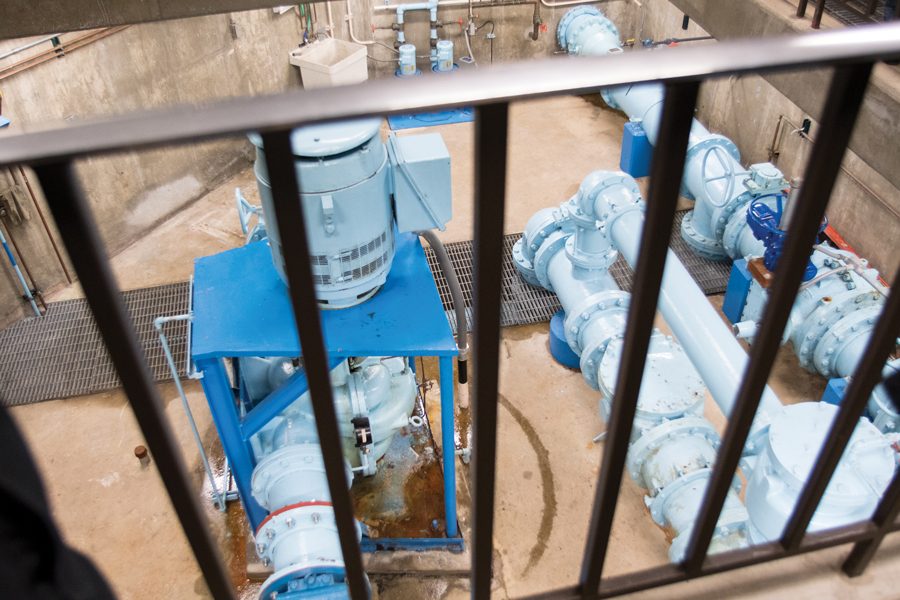 A vacant lot, two villages in need of water and a vocal community caught in between it all. Evanston is set to begin construction on a water pump this summer in an attempt to generate revenue from nearby suburbs.

Meanwhile, a handful of 5th Ward residents have been working as a task force for nearly four months in an attempt to fight against the fate of the 2525 Church St. lot.

Evanston City Council passed a memorandum in February to partner with the Morton Grove-Niles Water Commission to build a water pump station in the empty lot to distribute water to the suburbs by August 2019.

The villages of Morton Grove and Niles each have water contracts with Chicago set to expire by the end of 2018. The municipalities set out to find an alternative water source, and — after looking at other sources such as Wilmette and Glenview — eventually looked to Evanston, said Bill Balling.

Balling works for the water commission, an independent body that has worked with the local governments to establish the new pump.

Ald. Robin Rue Simmons (5th) has said that Evanston needs the money. The city is anticipated to raise almost $2 million in revenue per year, based on rate projections and pump predictions.

Currently, there is another pump station located in northwest Evanston on Gross Point Road, but it is not powerful enough to pump water to Morton Grove and Niles.

Some residents have insisted that City Council hastily approved the water pump station. Verzell James, a member of the task force protesting the water pump, said its passage involved a “lack of transparency.”

The task force is gathering information, acting as a liaison between residents and state legislators.

“What we’re doing is exposing the city … that it is not including residents (in decision making) –– they have a preconceived agenda on how they (the city) follow the rules,” 5th Ward resident Glenn Mackey, a member of the task force, said. “This is a systemic problem throughout the city.”

City engineering and capital planning bureau chief Lara Biggs told The Daily in March that the decision to install the water pump station was quicker than normal but, due to a conflict with Skokie over the water commission’s authority, Evanston officials decided they had to move quickly.

However, city manager Wally Bobkiewicz said the city and water commission sufficiently consulted with local residents. Since City Council unanimously voted in February to authorize the second pump, the city has held many open meetings to discuss plans for the lot.

“When (the commission members) realized they need to put a pump station in Evanston,” Bobkiewicz said, “the first thing out of their mouth was, ‘What do we need to do to be sensitive to the residents?’ We said, ‘Meet with the aldermen’ — and that’s exactly what we did.”

Former Ald. Delores Holmes (5th), who lives near the lot, supports the station despite not all of the residents being on the same page.

“People have to attend meetings,” Holmes said. “You can’t always be reactive, you need to be proactive. In order to do that, you have to get involved and not wait until things are happening to respond to them.”

Earlier this year, James went door-to-door talking to residents living near the future water pump’s location to gauge their awareness of the issue. James gathered 42 responses. He had asked if they had received any notice from the city regarding the pump station project — 40 said “no.”

Residents said they are also worried about noise that would be emitted from the station. A memorandum about the pump, however, predicted that the station’s noise will comply with local requirements.

And Bobkiewicz said he is not concerned.

“We’re unaware of any issues in any pump station anywhere in America,” Bobkiewicz said. “We’ve been careful to listen to the residents as far as issues with noise. We have dealt with those issues.”

However, many residents have also taken issue with the location of the new pump, which is situated on a lot that was initially designated for recreational use.

Mackey and members of the task force are not opposed to the construction of the pump station; rather, they wish it were moved to a different place in the area.

“It is a benefit for the city, and we’re not saying that the city should not build a pump station, but not in our area,” Mackey said. “Just because it’s more fiscally (advantageous) for Morton Grove, why does it have to be on the backs of the residents who have always been here?”

However, Bobkiewicz said the location was determined to connect Evanston’s water system to the pipeline that would be constructed by the receiving suburbs.

Balling said since the commission was established, it has been working at a “hyper speed” to organize a design, the easement land preparements, the permitting and construction bidding.

He recognized that the team has moved “on a pretty fast pace,” but noted that Evanston will be a “major benefactor” once the second water pump is established.

Balling said Evanston is going to be selling about 2.5 billion gallons of water per year. “It’s a highly profitable opportunity for the city,” he said.

Although the task force has not been able to halt the water pump station’s construction, group members have seen a dramatic change in terms of their own involvement with, and perspective of, the city.

“It’s actually changed me from a person that has not been very active in terms of social activism,” James said. “It’s made me more vocal, more willing to speak out to city managers, to not hold my tongue … because we were never given a chance to even think about what they wanted to do.”

In the future, the task force hopes to continue its work by recruiting members from every ward to advocate for more local issues.

“We plan to keep the task force going because we know that there is a lot of wrong going on, and if the city won’t police itself, then someone will have to police it,” James said.